Robert Free points out that many grassroots frontline veterans have been demanding the UN Indian NGO World Indigenous Conference promoters boycott the sham and not give it the token semblance of credibility. Free, who was among those at the Occupation of Alcatraz and Wounded Knee 1973, said he is glad the move is now towards a united front to boycott the proposed World Indigenous Conference 2014.
The following letter was written by Free prior to the planning session of the World Conference in Norway, one year ago, and described the high purpose, and what is actually happening at the UN. Sid Mills, Suzette Bridges of the fishing rights wars in the northwest, together with Free, advocated for the boycott. They suggested Free reach out to the other delegates.By Robert Free
Censored News


The history of indigenous sovereignty efforts to go the house of mica, the UN, where the nations of the world gather, was led spiritually and physically by Thomas Banyaca, from the Hopi Nation.
Hopi Thomas Banyaca shared prophecy at UN
Banyaca was one of several chosen and directed by the elders to go forth and share a prophecy that foretold of a time when the earth would be under great stress from wrongful living on our mother earth. He was to go to the house of mica and to declare our need to care for our mother earth. His mission was also to declare the sovereignty of indigenous peoples to land and rights to live in harmonious ways with our mother earth, even if the others did not chose to also to live in harmony with our mother earth. His leadership along with others efforts, educated many and helped to create the  many groups to go before the UN. The efforts produced, after 60 years, the Declaration of indigenous rights. The issue still is to recognize these rights with a way of accountability and implementation.
Lack of clear unified voice at UN
All other issues being addressed or brought forth before the UN and the world conference are issues of the symptoms of not having these rights. The core issues of de-colonization, returns of lands, return of wealth by churches, rescinding of the Doctrine of Discovery, control and consent of resource extractions,etc., are not being brought forth in clear strong united actions.
Crying around for better health, education, etc., from the oppressor colonizers, into the concentration camps of open air ghettos misses the core issue of empowerment and self determination. Self determination enables control of land and resources to provide these needs for ourselves.
The UN Game of Charades
I am not hearing the core issues being articulated strongly and adamantly, rather the crying for help for the symptoms of colonization. This is what, in the long run, allows the UN to dodge the core issues and say they are addressing concerns brought forth from indigenous peoples, namely health, housing, education etc.
The huge bureaucracy of the UN can then say, "Look at all the agencies doing studies and having meeting etc."
Or these NGOs are doing the studies themselves for us (as certain Indian NGOs are getting funded to do studies on our peoples.)
Strong advocates to these core issues are the needed delegates to the world conference and pre-planning meeting in Norway with our Sammi allies. The UNWCIP needs the delegates to re-present the original efforts to the global communities and nations.
We can boycott the world conference (after meeting in Norway with all the indigenous peoples) which  would have a louder impact and more spotlight focused on the token gestures of the UN. It is insulting to see the hard work and hard struggles of so many to go before the UN with so little resources to do the job of representing our peoples aspirations. Expecting us to struggle over decades to submit to their endless bureaucracy to no avail.
We would have more media exposure, for what ever its worth, than to continue to participate in the UN game of charades.
at March 05, 2014 2 comments: 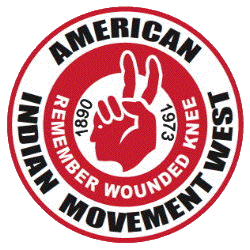 Len Foster,As you are AIM member, Wounded Knee veteran, and a member of the board of director for the NGO International Indian Treaty council (IITC), founded by AIM, (and international political arm of the AIM, and as you being the spiritual advisor to AIM political prisoner Leonard Peltier for over 25 years, and as this dastardly display by the Indian Country Today is deliberately anti-AIM; it comes just days before the 41 year commemoration of Wounded Knee, South Dakota (Feb.27); and orchestrated for print like it was in the New York Times; and timed while thousands of people around the world were preparing vigils and demonstrations for Leonard Peltier of AIM; and demonstrations held in front of US Dept of Justices across the country reminding them of the unsolved 60 murders during 1973-76 known as the "reign of terror" which was under that climate that Leonard was captured, falsely extradited, and later charged and convicted!I call on you to direct your executive director to write the newspaper editor  (and everyone else to do same) and express words that they are biased and practice yellow journalism unjustifiably so directed at the AIM, hampering Leonard Peltier's release from 38 years in prison, and disregards the achievements across Indian country brought on by AIM activism and the historic stand taken at Wounded Knee 73.I on behalf of AIM-WEST will say to our friends that we don't need this kind of reporting or illustration, and write also a letter to the editor, and further call on all our friends and supporters to boycott this trash newspaper that glorifies itself to have the bidding (and income) of government forces not compatible with self-determination and the progressive Indigenous struggles but dwells in rumors and kangaroo court decisions intended to destroy a movement of the people.http://indiancountrytodaymedianetwork.com/2014/02/23/aims-skeletons-closetSince IITC also prides itself as an organization that supports the release of AIM leader Leonard Peltier, and boast that they brought the UN special rapporteur to visit with Leonard Peltier last January, should be compelled to respond and condemn this type of reporting for it does absolutely nothing to help bring AIM leader Leonard Peltier home.Thank you, my friend, for your attention to this grave concern,Antonio Gonzales
AIM-WEST Director
www.aimwest.info
www.aimovement.org
at March 05, 2014 1 comment: