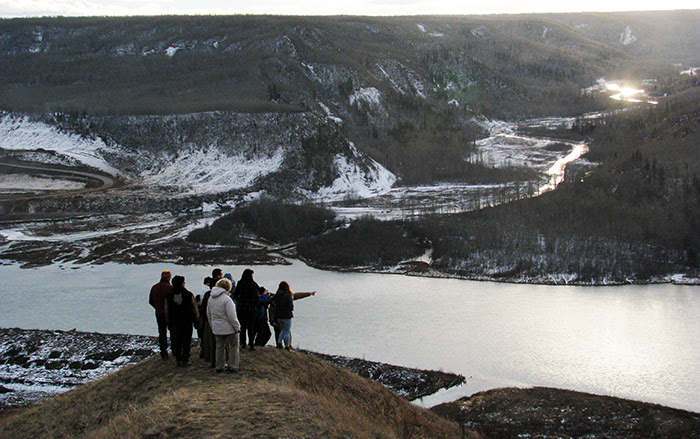 Read our latest report on Site C: Place of No Return

“Our people have a deep connection with this land because our ancestors told the stories and legends that are connected to that valley.” -- Chief Liz Logan, Treaty 8 Tribal Association, testifying before the environmental impact assessment of the proposed Site C hydroelectric dam.
The Peace River Valley in northeastern British Columbia is a unique ecosystem and one of the very few areas in the region that so far has been largely preserved from large-scale resource development. First Nations and Métis families and communities rely on the valley for hunting and fishing, gathering berries and sacred medicine, and holding ceremonies. Their ancestors are buried in this land.
The proposed $8 billion plus Site C hydroelectric dam would flood more than 80 km of the river valley, stretching west from Fort St. John. The severe impact on Indigenous peoples is beyond dispute. A joint federal-province environmental impact assessment concluded that the dam would “severely undermine” use of the land, would make fishing unsafe for at least a generation, and would submerge burial grounds and other crucial cultural and historical sites.

The West Moberly and Prophet River First Nations have gone to court to protect their traditional lands. Their struggle has been supported by the Union of BC Indian Chiefs, the Assembly of First Nations and many others - including local farmers and other landowners in the Peace Valley.

BC Hydro is not waiting for the resolution of the outstanding legal issues that are still before the courts. The provincial utility has begun clear-cutting great swaths of the Peace Valley floor, destroying the unique plant and animal habitat that is at the heart of the First Nations legal challenge to the project. At the start of this year, a small group of residents, calling themselves the Treaty 8 Stewards of the Land, have set up a camp at an historic site in the path of the logging. Their actions temporarily stopped the logging, but a BC court has now ordered the campers to leave the site. Helen Knott, one of the Stewards of the Land, has said.
"...before the court cases are even heard, BC Hydro is destroying the very valley that these court cases are intended to protect.  The way I see it, they are stealing from future generations, both Indigenous and non-Indigenous.  We are not here just for us but for the ones that will come after us."
The Treaty 8 Stewards of the Land are calling on the Prime Minister to honour his promise to uphold the Treaties by stepping in and cancelling all federal permits for the dam. Read more.

Site C violates human rights
Government officials in British Columbia say that they have “consulted” with Indigenous peoples about Site C. But consultation is not supposed to be a hollow exercise: it’s purpose is to protect the underlying rights set out in Treaties, the Canadian Constitution, and in international human rights law.
The rights have not been protected. In fact, they've been largely ignored.
The federal and provincial governments have not even assessed whether the harm that caused by the dam is compatible with Canada's Treaty obligations. And there has been no serious consideration of the possibility that the harm done to Indigenous peoples being so great that the best course of action would be to find another source of energy.
Amnesty International is not anti-development. We recognize that resource development can provide livelihoods and income necessary to ensuring a decent quality of life for everyone. But we have joined with First Nations and environmental groups to oppose the Site C dam because it's clear that the human cost is much too high.
International human rights law -- and rulings by the Supreme Court of Canada -- have made it clear that decisions with the potential for serious harm to the rights of Indigenous peoples should only made with their mutual agreement, or free, prior and informed consent.
This is the standard that should be applied to the Site C dam.
It's a matter of basic justice for people who have already suffered from decades of displacement, impoverishment and other hamrs resulting from decisions imposed without their agreement.
Read an open letter from the global head of Amnesty International

Making First Nations pay for British Columbia's electricity
The federal and provincial governments both gave their approval to the dam last year, despite the findings of the environmental assessment. In May of this year, the BC government announced that construction would begin this summer, despite legal challenges launched by First Nations and non-Indigenous landowners.
What's especially shocking is that neither government has provided a clear explanation of why they think the harm that would be caused by the dam can be justified. In fact, in response to the legal challenges launched by affected First Nations, the federal government has explicitly stated that at no point in the entire process was the question of justification ever really considered.
Furthermore, other sources of electricity generation that could potentially avoid such devastating harm were never explored.
Harry Swain, a former federal deputy minister of Indian Affairs who headed in the environmental impact assessment of Site C, has commented that the project should have been deferred, saying, "There’s a whole bunch of unanswered questions."

More than environmental impacts
Amnesty International recently carried out the first of a series of fact-finding missions to northeastern BC to look at the social impacts of the massive scale of resource development, including oil and gas development, already being carried out in the region.
Intensive resource development in northeastern BC has created a lot of high wage jobs in the region. But the rapid pace of development and the necessity of bringing in thousands upon thousands of temporary and transient workers to fill these jobs has also created serious social problems that are not being properly dealt with. Problems like a severe housing shortage, a shortage of doctors, and a shortage of quality, affordable day care. Problems like an enormous gulf in wages between women and men. Problems like rampant drug and alcohol abuse. Problems like overstretched police forces and underfunded and overworked social service agencies.
Women’s organizations and other frontline service providers told us that the failure to address the social impacts of existing resource development in the region has created conditions that puts women at much greater risk of violence – and Indigenous women and girls even more so.
And this is another reason why a better decision-making process, and more rigorous protection of human rights, is needed.

A national movement for fairness and justice

In taking a stand against Site C, Amnesty International has joined a growing movement of First Nations, environmental organizations, trade unions and faith communities. In February, more than 25 human organizations, faith communities, social justice groups and Indigenous peoples organizations sentan open letter to Prime Minister Justin Trudeau urging his cabinet to reject or suspend federal permits necessary for the construction of the dam.
The Peace Valley Environmental Association produces regular updates about Site C. Visit their website or their facebook page to learn more.
Our friends at RAVENTrust are also raising funds to support First Nations in their legal struggle against Site C. These efforts are vitally important, especially given the efforts by the federal and provincial governments to push the issue into a long, protracted court process. You can click here to donate to RAVENTrust, or start your own fundraiser!

TAKE ACTION!
40,000 Canadians have already signed Amnesty International's petition to halt Site C.
Add your name to join this national movement for justice!
If you've already signed the petition, please send a letter - or call your Member of Parliament. 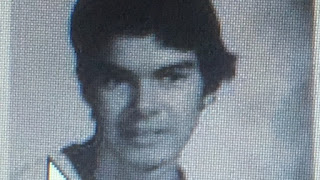 When a supporter of Treaty 8 land defenders was shot and killed by police -- while wearing an Anonymous mask and walking down the sidewalk -- Google Blogger took the extreme action of enforcing a take down order against Censored News and removing the article. Now, the destruction to the land, water and air by the proposed construction of Site C dam continues to be widely censored and manipulated in the mainstream news.

Now the family would like for everyone to know who he was, the young man shot and killed by the RCMP for no reason:
http://www.cbc.ca/news/canada/british-columbia/anonymous-activist-was-gentle-innocent-metis-man-says-cousin-1.3677750