By Camp of the Sacred Stone
Censored News

CANNON BALL, North Dakota -- Last month, spirit rider Mason Redwing was charged with felony reckless endangerment of law enforcement and a felony count of terrorizing law enforcement after he allegedly rode his horse towards a police line. On Tuesday, Judge Romanick found no probable cause and dismissed all charges against Redwing.
Similarly, Wanikiyewin Loud Hawk, a South Dakota native, was arrested on charges of reckless endangerment, criminal trespass, disorderly conduct, and obstruction of government function. The charges were dropped after Judge Romanick once again found no probable cause.
Water protector Red Fawn Fallis was arrested on the frontline last week for allegedly firing a .38-caliber pistol three times. The gun is claimed to have fired as Fallis was pinned to the ground by an officer, as two additional officers held her left arm. She faces charges for attempted murder, and her bond was set at $100,000, the highest yet of this campaign.
Sean Turgeon, also known as Prolific the Rapper, faces two charges of reckless endangerment and one misdemeanor obstruction of government function, after Morton County made allegations the he flew a drone near a North Dakota Highway Patrol aircraft. Turgeon gained national recognition through his music videos that criticize Dakota Access and the violent law enforcement response. He was released on bond on October 31, 2016.
These charges and arrests come after weeks of militarized police response and escalation of violence. Just last week, over 300 police officers fired pepper spray, percussion grenades, and shotguns at largely unarmed DAPL protesters, and a prayer circle of elders was interrupted and all were arrested for their peaceful protest.
Eryn Wise, International Indigenous Youth Council, “Red Fawn is a valued member of our community and a revered friend of the International Indigenous Youth Council. When we heard of the charges, all of us were in disbelief. Red Fawn has continually supported the youth council since its inception and is responsible for personally rescuing many of our members from the front lines after being brutalized by police. She is an extension of our organization and a selfless caretaker, being responsible for many women and elders within her own encampment. We'd like to ask as a council that you stop sharing the mugshot of our sister and instead speak her name. Uplift her in prayer and remember that even our most gentle and devoted warriors are under attack.”
Tara Houska, Honor the Earth, “The contrast between the treatment of indigenous people protecting their water and sacred sites vs. the so-called “Bundy Standoff” of armed white folks taking over a federal building is stark. We have seen elders arrested while praying, teenagers maced, unarmed protectors tased, and horses killed by police. Life altering consequences await us, at the hands of a prosecutor eager to comb the books for felony charges. This isn't justice. America should be in an uproar over what's happening to indigenous people and their allies within U.S. borders. President Obama’s “let it play out over several weeks” isn't an answer. Order a full Environmental Impact Statement and protect the water and sacred sites at issue for the people.” 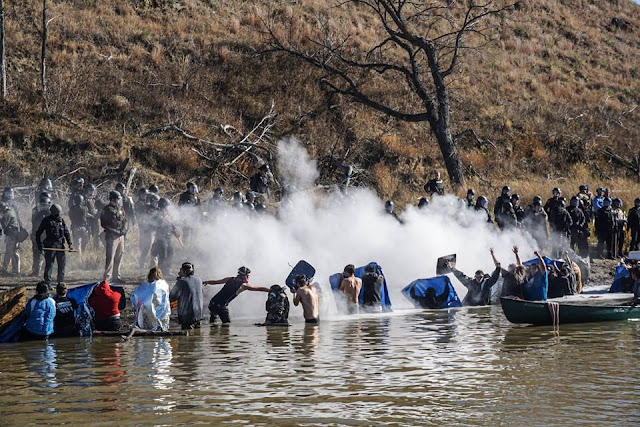 CANNON BALL, North Dakota -- On Wednesday, November 2, law enforcement desecrated the burial grounds of Alma Parkin and Matilda Galpin, the indigenous women who once owned the Cannonball Ranch. As water protectors held a water ceremony, snipers shot at them from armored vehicles parked around the tree marking the graves. Water protectors building a makeshift bridge across the Cannonball River were met by riot police firing less-than-lethal munitions at point blank range and indiscriminately blasting OC Spray on peaceful unarmed people. The bridge was torn down per theorders received by Morton County from the U.S. Army Corps of Engineers. Morton County police then unleashed pepper spray and tear gas on water protectors standing in the river with their hands in the air.
A teenage boy was shot in the back by a rubber bullet at point blank range, causing him to cough up blood. He was examined on site by Dr. Jesse Lopez who confirmed that the young man did not go to the hospital. In addition to the young man, two additional people were shot at and hit with rubber bullets.  Over 100 were injured in total and the camp’s medical facilities were overwhelmed.

According to reports, protectors began falling back from the shoreline in a “domino effect” and medics laid tarps across the grass to treat the wounded whose entire bodies were covered in pepper spray. Many people worked to haul protectors by boat back to the south side of theriver to receive treatment for mild hypothermia and chemical burns. Police continue to monitor throughout the nights. High powered flood lights have been posted all along the hills surrounding DAPL’s drill pad where they intend to drill under the Missouri River. The pad has been fortified with concrete walls and razor wire as the company works around the clock.
Eryn Wise, International Indigenous Youth Council, “Members of our youth council were again among the first to be wounded while in the water today, trying to rescue their relatives from being hurt. I spent an hour washing pepper spray from their hair and faces. They asked me, ‘When will this end?’ I had no answer.”
Linda Black Elk, Standing Rock Medic and Healer Council, “As I used milk of magnesia to treat pepper spray victims, I looked towards the river the sight that met my eyes was horrific. Rows upon rows of white armored militarized police were firing indiscriminately into the water at brown people who were swimming, risking hypothermia, and rowing kayaks and canoes to protect the water and stop a pipeline.”
LaDonna Bravebull Allard, Sacred Stone Camp, “They parked their armored cars on the graves of Matilda Gaplin, Eagle That Looks At Woman, and her are her daughters Louisa DeGrey Van Solen and Alma Parkins who once owned the Cannon Ball Ranch. Next to her is her husband Charles Parkins, and 11 babies. These are famous people for us here in Indian country. Matilda was the only woman to sign the Fort Laramie Treaty of 1868. Louisa was the first school teacher on Standing Rock. I am deeply hurt to see the desecration of their graves.”

Mohawk Nation News
Please post and distribute.
MNN. Nov. 3, 2016. NOTICE FROM “PEOPLES FIRE”.
wa’tkwanonweráh:ton [we give you greeting]; Today, the Kanien’ke:haka are blocking the CP train tracks at 9 PM at Adirondack Junction, to stand with our Lakota relatives at Standing Rock in North Dakota who continue to defend our Mother. The women have given consent to the rotiskarekethe to stand on the front lines to protect our sacred water for millions of people.

Our relatives are being threatened and abused by the militarized police in their homeland. The US government protects Dakota Access Pipe Line while disregarding environmental disasters. The Canadian and American Governments neglect their obligations to their people. We stand for the safety of all.
The people see the link between the CP train that commutes through Kahnawake and their origins from Standing Rock. They transport Bakken crude oil from North and South Dakota; 85% of the “black serpent” that slithers the land, carrying this poison, cannot safely carry heavy crude oil. Billions of gallons of this explosive material is being transported throughout great turtle island by fragile tankers on a daily basis, putting families at risk.

Lac Megantic Bakken bomb explosion July 6, 2013.
The railroad traverses residential areas at Kahnawake and throughout great turtle island. The kanien’ke:haka fear a Lac Megantic disaster similar to the explosion on July 6, 2013. It erupted after passing through kahnawake. Lac Megantic July 6, 2013, blast. The blast killed 47 people and injured civilians. This time bomb is preventable. Many alternatives are available. We demand safe alternatives by the oil corporations.
This video describes the bomb trains going through our communities.
https://www.youtube.com/watch?v=NNFUrUT339U
Friends and allies are asked to spread awareness about Standing Rock:  http://bsnorrell.blogspot.ca/
UN at StandingRock. https://www.facebook.com/fusionmedianetwork/videos/1627643637261608/?hc_ref=NEWSFEED

Tribe Called Red always reminding us of who we are: