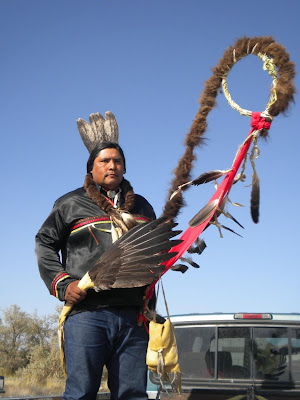 Charges dropped against traditional Paiute gatherer Wesley Dick (Kwassuh)
Censored News
RENO, Nevada -- On Wednesday, November 2, 2011, the trespassing charges against Wesley Dick (Kwassuh) were dropped. Kwassuh is standing up for all of our Inherent Rights, Indigenous Rights, and Cultural Rights as Native People.
He would like to thank everyone who came to the Reno Court to support him and also to everyone who has continued to support him over the years.
Kwassuh's message came after a federal judge in Reno ruled he is innocent of charges that he drove off a designated roadway to gather tules, cattails, at the Stillwater Wildlife Refuge near Fallon. The U.S. Fish and Wildlife warden issued two citations against Kwassuh, a Fallon Paiute-Shoshone tribal member, for collecting plants on the refuge and for driving off a roadway.
Previous article at Censored News: Northern Paiute gatherer charged by Nevada game warden http://bsnorrell.blogspot.com/2011/08/northern-paiute-gatherer-chaged-with.html

(July 2011) The Kuiu Kwaan Tribal Court in Tacoma, Washington, issued a declaratory judgment in the case of Northern Paiute traditional gatherer Wesley Dick vs. the United States. The combined court of judges from across Indian country issued the judgment upholding the right of Wesley Dick, Kwassuh, to gather tules in the traditional way, after he was cited and fined $800 by US Fish and Wildlife in Nevada.
http://bsnorrell.blogspot.com/2011/07/tribal-court-judgment-upholds-northern.html
at November 03, 2011