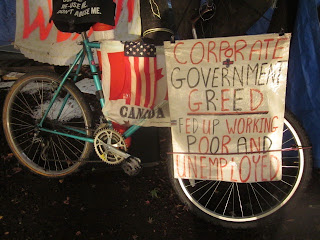 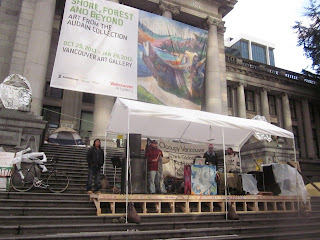 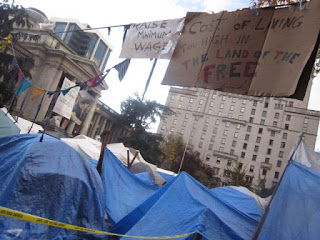 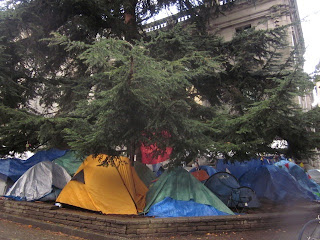 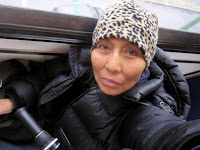 Censored News
VANCOUVER, B.C. -- Navajo filmmaker and photographer Arlene Bowman shares her photos of Occupy Vancouver. "I saw this yesterday, I was impressed by their signs. It was cold there. Their signs were outstanding. These guys were playing music and all geared for this Occupy Vancouver. I liked it alot. I felt welcomed there even though I know people were suspicious of people taking pics. But the fact that I was Indigenous made a difference.  I felt people were welcoming to me. Cool. I felt like was back at ASU or San Francisco, Calif., in those times. I know when people don't like me and don't want me to be there," Bowman said.

Photos published with permission at Censored News.
Dine' filmmaker and photographer Arlene Bowman was born on the Navajo Nation and grew up in Phoenix, Arizona. She now lives in Vancouver. She completed her master's degree in film at the University of California at Los Angeles. She is the producer of "Navajo Talking Picture," about her grandmother in Greasewood, Arizona. The film, which is popular in international film festivals, reveals the challenges for a Navajo going home. Bowman also produced "Song Journey," which was shown on PBS, about pow-wows and women drummers at pow-wows. Bowman's new film, "Graffiti" was among those at the French film festival, Festival International Du Film D'Amiens in 2010. In this short narrative, a woman rebounds from injustice by writing about racist graffiti targeting Indians and sprayed throughout Vancouver.
at November 04, 2011 No comments: 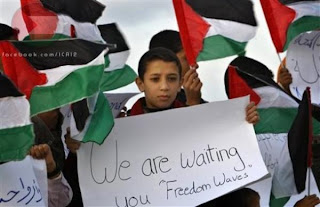 Censored News
The Israeli navy boarded two boats on Friday, traveling to Gaza in solidarity with medicine and supplies. The military said in a statement that the Canadian "Tahrir" and Irish "Saoirse" vessels, which had 27 people on board, would be taken to the Israeli port of Ashdod. The US Boat to Gaza news alert states, "At 7:43 am (east coast time) ground support crew lost contact with two ships, the Saoirse of Ireland and the Tahrir of Canada, carrying 27 civilian passengers, medical supplies and letters of support for the people of Gaza. On board the Tahrir is one American, Kit Kittredge."

FREEDOM WAVES TO GAZA
BOARDED BY ISRAELI MILITARY
By Free Palestine
Canadian and Irish ships sailing with Freedom Waves to Gaza have been illegally boarded by the Israeli military in international waters a short while ago.

The Israeli military stated that “Upon arrival of the vessels at the Ashdod port, the activists will be transferred to the custody of the Israel Police and immigration authorities in the Ministry of Interior”.

Freedom Waves to Gaza organizers have been unable to communicate with the ships since soon after the vessels were approached by Israeli warships earlier this afternoon.

The Canadian boat ‘Tahrir’ (Liberation) confirmed that the Israeli navy had contacted them asking for their destination at around 13:00 (Gaza time) to which Ehab Lotayef, an activist on board the ship, replied ‘The conscience of humanity’. When the Israelis again demanded to know the destination of the ship Lotayef replied; ‘The betterment of mankind’. ’

Huwaida Arraf, spokesperson from Freedom Waves to Gaza, said “It’s clear that 27 civilians on two small boats, carrying only medicine, constituted no security threat to the Israeli state, and that the determination to keep them out is only a furtherance of Israel’s policy of collective punishment, a crime against humanity. Despite this Israeli aggression, we will keep coming, wave after wave, by air, sea, and land, to challenge Israel’s illegal policies towards Gaza and all of Palestine. Our movement will not stop or be stopped until Palestine is free.”

Anatolia News Agency, Turkey, has reported that the boats were offered the choice to go to Egypt or return.

At 13:00 both ships were around 51 nautical miles from the coast of Gaza in international waters.

The Freedom Waves to Gaza initiative is a non-violent, civil society movement to challenge the illegal Israeli blockade of Gaza Earlier this morning, activists aboard both ships were preparing for possible attack by the Israeli navy by training in nonviolent resistance tactics. The two ships, carrying a total of 27 passengers and $30,000 worth of medicine and supplies, set off from Turkey on November 2.

Please help us continue our work.

“The Center for Constitutional Rights condemns Israel’s use of military force to yet again forcibly stop a nonviolent effort to break the siege on Gaza. Human rights defenders were attempting to reach Palestinians imprisoned in Gaza to deliver medical supplies and letters to the people there. Israel’s blockade is illegal under international law, constituting collective punishment prohibited by the Geneva Conventions, and has caused excessive and disproportionate harm to the civilian population of Gaza, leading to a humanitarian crisis of epic proportions. The use of force against unarmed activists threatens grave injury or worse to peaceful protestors, as we saw in May 2010, when Israeli commandos killed nine unarmed passengers, including one American citizen, on the Freedom Flotilla I. As a nonviolent protest, the flotilla should instead be ensured safe travel, permitted to reach Gaza, and protected from the use of force. The Center for Constitutional Rights condemns the illegal blockade of Gaza and this intervention by the Israeli navy, and calls on the United States and the international community to help end the illegal blockade and the isolation of Palestinians, as well as impunity for Israel’s use of force.”

The two boats set sail unannounced from Turkey, carrying twenty-seven human rights activists from several countries including the United States, and announced the attempt only after reaching international waters. This latest attempt comes less than six months after the “Stay Human Flotilla” was detained and sabotaged in Greece by local port authorities in response to mounting pressure from the United States and Israel.

The Center for Constitutional Rights is engaged in Freedom of Information Act (FOIA) litigation seeking information about the U.S. knowledge of, and response to, the attack on last year’s flotilla. On October 24, 2011, the Department of State produced 126 documentsto CCR pursuant to CCR’s FOIA litigation. For more information, please see our case page.  For a factsheet about the illegality of the blockade of Gaza and the attack on the Gaza flotilla, please click here.
###
The Center for Constitutional Rights is dedicated to advancing and protecting the rights guaranteed by the United States Constitution and the Universal Declaration of Human Rights. Founded in 1966 by attorneys who represented civil rights movements in the South, CCR is a non-profit legal and educational organization committed to the creative use of law as a positive force for social change.
US halts funding to UNESCO over Palestine vote
In other news, the United States has halted funding to UNESCO, after UNESCO votes to admit Palestine. The US said it will not give UNESCO the promised $60 million in November. Watch video:
http://youtu.be/CEGuvuSe0q4
Boats halted by Israeli navy"At 7:30 am  the Tahrir was interrogated, via radio, by the Israeli Navy.  The ships were approximately 48 nautical miles off the coastline, well into international waters.  Asked by the Israeli Navy for their destination, Canadian activist Ehab Lotayef replied, "The conscience of humanity."  When they repeated the question, asking for final destination, Lotayef said, "The betterment of mankind," the US Boat to Gaza reports.
The US Boat to Gaza urged:
Now is the time to act. Call the State Department and the White House and tell them to press the Israelis to ensure the safety of those aboard the two ships!
Call the State Department:
and the White House: 202-456-1414
We urge you to organize support actions in your area today. Send the information to our webmaster at bio190d@gmail.com - it will be posted immediately.
For those of you in the NYC area an emergency support vigil will take place from 5pm to 6:30pm today - Friday, November 4th across the street from the Israeli Consulate at 800 2nd Avenue between 42nd Street and 43rd Street. Denise Rickles, with Code Pink NYC, will be the point person for this support rally. She can be reached at deniserr@msn.com.
Please bring appropriate signs with you such as:
END THE SIEGE OF GAZA NOW!
OCCUPY WALL STREET NOT GAZA
END U.S. FUNDING OF ISRAELI ATTACKS