Dying in the desert in Maricopa County, Arizona


In one of the hottest desert regions in the US, migrants continue to die of dehydration, in an area where US Border Patrol agents have failed to respond to calls for help.

"The deaths of three young men in the Arizona desert last month have prompted Mexican non-governmental organizations to renew demands for actions and changes from the Mexican and U.S. governments. In a statement signed by scores of human rights, migrant, labor, civic, and faith-based organizations, the groups demanded meaningful policy shifts at a time when current U.S. legislative proposals for tighter security amount to a 'virtual state of war on the border.'”

"The call followed the June deaths of the Plutarco de Jesus brothers in Maricopa County, Arizona. According to the Tlachinollan Human Rights Center of the Mountain, a longtime advocacy organization based in Tlapa, Guerrero, 24-year-old Inocencio Plutarco de Jesus was working as a farm laborer in Sonora when he invited his younger brothers, 18-year-old Macario and 15-year-old Humberto, to accompany him to the U.S. The brothers were from Cuanacaxtitlan, Guerrero, a small indigenous community in the Costa Chica region of the southern state," according to the article 'Outrage follows deaths in Arizona,' http://fnsnews.nmsu.edu/

The following e-mails by Arizona police exposed the US Border Patrol's failure to respond to migrants in distress. Censored News first published these in July of 2011, after the e-mails were exposed by hackers.

Arizona police said they are frustrated with the delays of US Border Patrol agents who fail to respond to calls, when migrants are in distress in the desert where temperatures range from 110 to 117 degrees. The Arizona police e-mails point out the delays from agents in Why, Arizona, on the Tohono Oodham border, north of Lukeville, a region with the highest number of migrant deaths from dehydration.

“We do not have the manpower to sit and wait for Border Patrol,” one Arizona officer said.

Here are three internal police e-mails from 2010, made public by hackers. The e-mails refer to ETA (expected time of arrival) of USBP (US Border Patrol) and the delayed response to UDA (undocumented aliens.)

“Major, as you can see from this e-mail, Area 6 is having a significant problem with pedestrian UDAs. My thoughts are as follows:

If, in the course of their duties, officers are dispatched or come across individuals either flagging traffic down or walking along the interstate and they seem distressed or unprepared to face the extreme heat of the desert, I would prefer they be transported to an area where water, shade, etc. is readily accessible/available if USBP cannot respond or has a lengthy/delayed response.”

Another police e-mail in 2010 states:

“Our situation with UDA's is unique here in Area 6. We have been getting a high volume of calls lately for pedestrians and or UDA's in the area if the Maricopa-Pinal County line. Some days we will get as many as 6-7 calls a day. I know our policy is we do not detain and transport UDA's to BP but here is our problem:

Most of the time BP's response is from Why or they don't have anyone available. If they are able to respond from Why their ETA could be 11/2 hours or more. Now that the temperature is over 110 I am not comfortable with just checking on them, advising BP and leaving them out there.  On the other hand, we simply do not have the manpower to sit and wait for BP.

I suppose what I asking for is some guidance and clarification, can we transport them to BP when they basically give up or do we check welfare and if they are not in need of EMS just leave them out there?

My thoughts are if they seek us out we should assist them and not leave them stranded 15-25 miles from water and food. Our actions need to pass the headline test but more importantly we need to treat them humanely.  Please advise as soon as possible as this is a daily occurrence.”

In another Arizona police e-mail in 2010:

“I concur with both of your thoughts on how to manage this problem. If we have a distressed pedestrian, regardless of origin, we have a humanitarian responsibility to act for their safety. And if that requires that we transport them to a Border Patrol checkpoint or facility or to another location where we can remove them from the heat, I believe we will meet both the headline and humanity tests.

In situations where BP will not respond or has an extreme extended eta, I see no problem with transporting them to the check-point or the nearest BP station if the situation requires it.  We would transport any other citizen in need to the nearest place of refuge, so I think we should do the same in these circumstances.”

The Arizona police data exposed in 2011 includes a report on the testimony in Washington regarding Border Patrol agents charged in drug smuggling and corruption cases of aiding drug cartels to smuggle drugs into the US.

On June 9, Alan Bersin, commissioner of Customs and Border Patrol, testified before the Senate Homeland Security and Government Affairs Subcommittee on Disaster Recovery and Intergovernmental Affairs.

Bersin said, “Since 2004 in October, 127 CBP personnel have been arrested, charged or convicted of corruption.”

Charles Edwards, the acting Inspector General for the Dept. of Homeland Security, testified before the committee that there are 267 active corruption-related investigations underway of Customs and
Border Patrol personnel.

The hacked e-mails were exposed during three releases of data during June of 2011, labeled “Chinga La Migra,” by Antisec, Anonymous and Lulzsec.
at July 17, 2013 No comments:

Since 1990, Vision Maker Media has invited filmmakers to submit proposals in various stages of their film-from research & development, to production, post-production/completion, and outreach. All proposals are reviewed by a group of public television professionals, station programmers, independent filmmakers, educators, and executives from indigenous organizations.
Read more »
at July 17, 2013 No comments:

MNN. July 16/13. Idle No More was a grassroots Indigenous movement until it got incorporated in January 2013. The owners are shareholders and are now part of the foreign corporate grid structure that controls us and our possessions. The settlers can become part of Idle No More, decolonize themselves and help stop the genocide. Idle No More is governed by the foreign corporate hierarchical structure of Admiralty Law, the law of commerce. It can get a bank account, be taken over by anybody through 51% purchase of the shares. The bankers will take control, if they haven’t already. All corporations exist to generate profit for the shareholders.

Idle No More can sue, buy, sell property, make contracts, pay taxes, even commit crimes. It protects the owners from personal liability for debts and obligations. Tax receipts can be provided to foundations and government bodies for donations to their enterprise. Like all corporations, annual meetings are obligatory.
MNN is an advocate of the real law of the land, Kaianerehkowa/Great Law of Peace. We have never been idle in all our existence. True Indigenous nations are the independent sovereigns of Onowaregeh/Great Turtle Island, and keepers of the law of peace.
All corporations are controlled by the bankers. Those who remain with Idle No More Inc. can’t fight an entity they have become a part of. It makes no sense.

It will be easier to get raise funds.

The corporate band council sell-outs are the same. They work for and get paid by the Corporation of Canada. These traitors will be brought before their people to answer for their treachery.
Idle No More awakened settlers to the genocide. Now they can follow the white roots of peace. If their minds are clean, they can follow the real law of the land, the Kaianerekowa. They are welcome to take protection in the shade of the tree of peace with us. As the band “Show of Hands“  points out ; “When the Indians, Asians, Afro-Celts It’s in their blood, below their belt. They’re playing and dancing all night long. So what have they got right that we’ve got wrong? Seed, bark, flower, fruit. They’re never gonna grow without their roots Branch, stem, shoot They need roots” Roots
MNN Mohawk Nation News kahentinetha2@yahoo.com Thahoketoteh@hotmail.com For more news, books, workshops, to donate and sign up for MNN newsletters, go towww.mohawknationnews.com  More stories at MNN Archives.  Address:  Box 991, Kahnawake [Quebec, Canada] J0L 1B0  For free download of Mohawk music thahoketoteh.ws
IDLE NO MORE Canadian trade-mark data
Show Third-Party Information Liability Disclaimer
The database was last updated on: 2013-07-09
APPLICATION NUMBER: 1609306
REGISTRATION NUMBER: not registered
STATUS: FORMALIZED
FILED: 2013-01-10
FORMALIZED: 2013-01-14
APPLICANT: Jessica Gordon, 7 Vanier Crescent, Saskatoon, S7L 5J8, SASKATCHEWAN
TRADE-MARK (Word): Idle No More
INDEX HEADINGS: IDLE NO MORE
WARES: (1) catalysts of blankets mugs, clothing placards
SERVICES: (1) providing education
CLAIMS: Used in CANADA since October 26, 2012.
Action Information 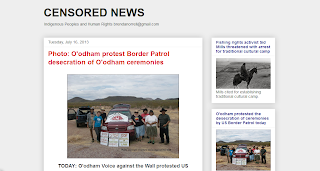 Honestly when I created Censored News seven years ago, I thought it would only take a year or two for people to see the need for a real uncensored national Native American newspaper, and create one.

Well, that was naive. Not only has that not happened, but the amount of plagiarism in Indian country media each day boggles the mind. How can it be that hard working reporters can't make a dime -- and armchair plagiarizers who never leave their homes get fat paychecks?

Still, I wouldn't trade these years at Censored News for anything. Tuesday was one of the best days in a long time at Censored News, with more than 5,000 readers. It always makes me smile to see that Russia and China are at the top of the readers list. It is always a good day to share a photo of an O'odham protest against the US Border Patrol, news from the Longest Walk 4, and to warn of the threat of arrests at the traditional camp in Washington state.

One reason that plagiarism is so rampant in Indian country media is because of the websites that just share links without doing any journalism. They usually promote the plagiarizers, and don't bother to do any research to find out the original source and who did the actual hard work.

Another reason is that Indian Country Today Media Network fired its real reporters years ago and hired plagiarizers to rewrite others hard work. This is the pattern of those reporters who never leave their homes. This plagiarism is expected by the newspaper's editors and publisher.

Thank you to all our readers, writers and photographers.

Brenda Norrell has been a news reporter in Indian country for 31 years. She served as a reporter at  Navajo Times during the 18 years that she lived on the Navajo Nation. She was also a stringer for AP and USA Today. After serving as a longtime staff reporter for Indian Country Today, she was censored and terminated in 2006. She began Censored News as a result. Now in its 7th year, Censored News has no advertising or sponsors.
at July 17, 2013 No comments: