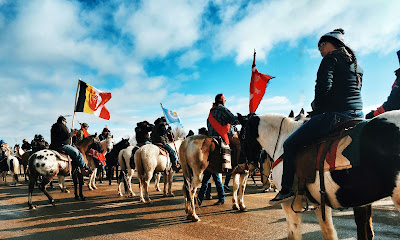 Govinda of Earthcycles, and cohost Michelle Cook, Navajo and recent law school graduate, have arrived at Standing Rock camp. They just arrived overland, from southern Arizona and northern California at the same time! They will be live and on the air in the morning. We will be posting the show at Censored News and on Facebook. As always, thanks for listening and being part of the struggle for justice and dignity. www.bsnorrell.blogspot.com

For those of you who don't know about Earthcycles, Govinda has been broadcasting for grassroots struggles for the past 10 years. Earthcycles and Censored News broadcast live from AIM West; Acoma and Laguna Pueblo uranium summit; Havasupai uranium summit; Tohono O'odham border; Peltier and Boarding School Tribunals in Green Bay, WI; the Mother Earth Conference in Bolivia; and for five months on the Longest Walk northern route in 2008. We were live on Mandan, Hidatsa and Arikara in North Dakota.
Michelle Cook, Navajo and recent law graduate, joined us on the border, and in Bolivia. She flew to Bolivia from New Zealand, where she was learning from Maoris on a Fulbright scholarship. Now, we have relays for our broadcast in Europe and elsewhere online. It is grassroots, so please give them a helping hand in Standing Rock.

Donate to Censored News coverage and crew
at August 19, 2016 No comments:

The Cheyenne and Arapaho are responding to Standing Rock's call for help, as they battle the Dakota Access Pipeline. 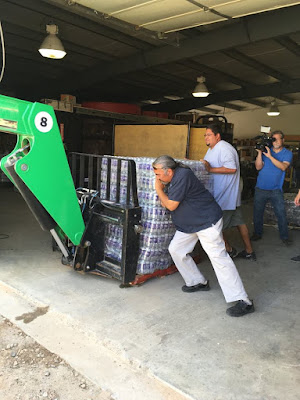 Economic Development loads water donated from the Lucky Star Casino . The small team is headed to North Dakota to assist the needs of the Standing Rock Sioux Tribe.

Please post distribute.
MNN. Aug. 18, 2016, Syracuse NY. Judge Frederick J. Scullin Jr., a federal court judge, appointed for life by the US President, walks in like gang busters. He clicks his heels and sits down at the front of the pirate ship called the Federal District Court, 10 minutes late. “This is my court and everyone shall obey my rules!”

Five pro se plaintiffs/victims of the May 18, 1997 assault by the New York State ‘death squad’, called the “I-81 INDIAN DETAIL”, were a few minutes late. After delaying the proceedings for almost 20 years, Scullin immediately threw them out of the case. Security was holding them downstairs. After verbal objections, they were reinstated.
Scullin, your kangeroo court has no jurisdiction over international matters that need to be resolved. Your court engineered our lawyers, Terrance Hoffman, Robert Anello, Jodi Peikin and the rest to dump us.
Judge Scullin [Scully] was biased, disrespectful and not neutral and should be removed from the bench. The transcript and audio will show this. We cannot get a fair trial in any Admiralty Court because they are only for banks and corporations and always about money.

Scully: “This is my house and you’ll do what I say, or else!”
We did not cause the attack in 1997 nor the court delay. Scullin asked if we still wanted a jury trial or a bench trial before him. Asst. Attorney General Tim Mulvey quickly jumped up and said, “Yes, yes, yes”. We said, “No, we want a fair and impartial hearing” so they can judge the evidence.
Mulvey has a motion to remove 35 cops from the case. They were all part of the death squad that carried out the near mass murders of men, women and children at the peaceful gathering on private property. We want an evidentiary hearing of the facts before a jury on this. Every cop must be tried and cannot use the “I was following orders” defense. [Nuremberg Trial confirm this].
Many of the 76 victims getting settlements weren’t there. Some of them support relieving of 35 police of wrongdoing because they didn’t see them do anything forceful!. What! We were being beaten to a pulp.They also want us to identify those cops who removed their badges and disguised themselves. They were all part of the hell and emotional distress we are feeling to this day.

He rules his little ship. But not outside.
We refused to take the sell-out settlement to keep our mouths shut. After Scullin left, Mulvey, said we could tell our story to some judge and he offered us a low ball amount. We refused. We want all the people in the world to know that we have been fighting for justice for over 20 years in the corporate admiralty court system.
Mulvey then put his hands back into his pockets and told us he was going to object to everything that we present, especially the police videos showing the attack. Everyone in the world can see these videos on the internet.

Some witnesses say the I-81 INDIAN Detail was sweet and gentle.
NYS cops, James Parmley and George Beach planned and carried out the deadly I-81 Indian Detail in 1997 which was ordered from President Clinton’ Office. Parmley retired. Governor Cuomo promoted Lt. Col. George Beach as the NY State Police superintendant.
Scullin showed absolute disrespect. He came to intimidate. We will seek help from the international community to take this to a non-Admiralty dispute resolution court where we can get a fair trial. Not one reporter was at this court. They are all controlled by the “Indian Ring”.
Jimi Hendrix paints a better picture of this case and his yellow is not so mellow: “My red is so confident. He flashes trophies of war and ribbons of euphoria. Orange is young, full of daring but very unsteady for the first go round. My yellow in this case, is not so mellow”.
ALERT: PayPal has taken all of MNN’s funds [$165] without explanation. They are asking for payment to close down account. MNN Mohawk Nation News kahentinetha2@yahoo.com for more news, to donate and sign up for MNN newsletters, go to mohawknationnews.com More stories at MNN Archives. thahoketoteh@ntk.com Address: Box 991, Kahnawake [Quebec, Canada] J0L 1B0 or original Mohawk music visit https://soundcloud.com/thahoketoteh
Permanent Court of Arbitration http://www.haguejusticeportal.net/index.php?id=311
Nuremberg Trials. http://www.history.com/topics/world-war-ii/nuremberg-trials
All Indians are dead. http://indiancountrytodaymedianetwork.com/2014/11/17/all-indians-are-dead-least-thats-what-most-schools-teach-children-157822
Aboriginal law above white man’s law.http://nationalunitygovernment.org/content/aboriginal-law-must-sit-top-whitemans-law-because-our-law-law-land
on UN declaration
State settles lawsuit.    http://www.syracuse.com/crime/index.ssf/2016/06/state_agrees_to_settle_lawsuit_over_troopers_handling_of_1997_onondaga_nation_pr.html
NYS police investigators problems.http://www.syracuse.com/news/index.ssf/2012/08/state_police_investigator_prob.html
http://www.syracuse.com/news/index.ssf/2012/11/post_709.html
Some refuse to sign deal. http://videos.syracuse.com/post-standard/2012/11/native_americans_refuse_to_sig.html
Police admit responsibility for beating up onkwe’hon:weh.   http://www.syracuse.com/crime/index.ssf/2016/08/new_head_of_state_police_led_response_to_1997_indian_protest_that_ended_in_27m_s.html
Col. Beach now head NYS Police. http://www.timesunion.com/local/article/As-State-Police-superintendent-is-confirmed-old-7974464.php
http://mohawknationnews.com/blog/2016/08/16/nyst-onondaga-savage-saga-81816/
http://www.govtslaves.info/warren-buffetts-foundation-donated-over-70-million-in-one-year-to-planned-parenthood/