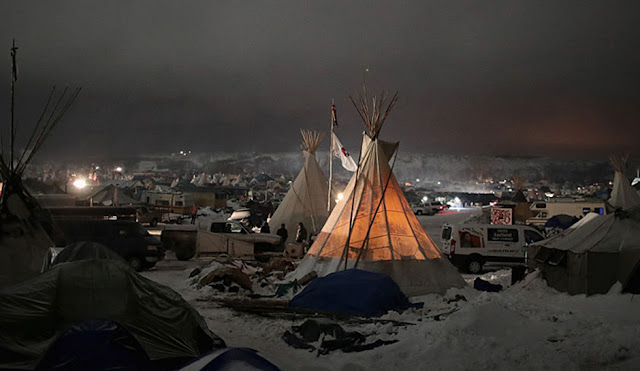 GREETINGS FROM THE NAHOLOWA'A OHANA
On Thursday, December 8, Bert Allen “B.A.” Naholowa'a suffered a heart attack. He was outside of the gas station near the Prairie Knights Casino. He was there doing maintenance on his RV. He'd been in the area since roughly November 26th serving as a volunteer medic to water protectors at Oceti Sakowin Camp.
B.A. received first aid, and an ambulance was called to assist him. He was taken to Fort Yates Hospital. He did not recover and passed away that day.
B.A. was Kanaka Maoli (Native Hawaiian), American Irish, and American Chinese. B.A. was a second generation Air Force veteran. B.A. resided in Arizona. He is survived by 4 children, their mother and their partners, 8 grandchildren, 3 sisters and a large extended family.
From B.A.’s family:
"We were regularly in contact with dad while he was volunteering at the camp. He was honored to be there and of service to the camp community. Thanks to all that made his experience a good one. He walked on in a good way. We are sure he is in peace.
The Naholowa'a Ohana is happy to receive visitors for B.A. at a visitation on December 13th from 11 am to 1 pm at Dawise Perry Funeral Home in Mandan, North Dakota. Later his ashes will be taken home to Hawai‘i for further services."
---------------------------------------------------
We express our deepest sympathies to B.A.'s Ohana and want everyone to know that B.A. left a beautiful lasting impression on all who he had contact with. We don't have words to describe the loss that those of us who had the honor of knowing B.A. are feeling; but we are grateful for the time we did get to spend with him - time well spent caring for the water protectors. We are also grateful that B.A.'s family could come to camp and hold a memorial service today. Those of us who were able to come were very blessed by the songs and ceremony.
We ask everyone to please give the family time and space to heal. We love you all.
-SRMHC

(Sorry, but the original link at Censored News is not functioning. This article has been reposted, with original comments reposted. Thank you.)

Mexico moving ahead with deadly pipeline through Yaqui land 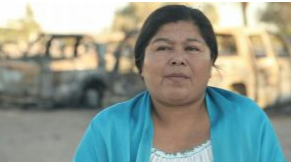 Yaqui tribe lawyer was kidnapped on her way to a community meeting to plan the next steps in their fight against the U.S.-Mexico Agua Prieta pipeline.

On Tuesday a group of masked men kidnapped at gunpoint Anabela Carlon Flores, a lawyer for the Yaqui tribe, who are facing increasingly violent repression in their fight against the cross-border Agua Prieta pipeline in Northern Mexico.

Anabela Carlon Flores told reporters she was driving with her husband to a community meeting in the Yaqui community of Bacum on Tuesday at approximately 7 p.m. when their car was stopped by a group of armed masked men. She and her husband were blindfolded and put in another car where the human rights lawyer was told to “stop fucking around." She was later dropped on the outskirts of nearby Ciudad Obregon, while the kidnappers held on to her husband, Isabel Lugo Molina, who remains captive. Carlon Flores said she fears for his life.
The incident is the latest in a series of escalating attacks on members of the Yaqui Tribe who are opposing the construction of the Texas-based Sempra Energy pipeline project, which aims to bring natural gas from Arizona to the Mexican state of Sonora, crossing Yaqui territory.
Read full article at TeleSur"
http://www.telesurtv.net/english/news/Lawyer-for-Yaqui-Tribe-Fighting-Mexicos-DAPL-Kidnapped-20161215-0002.html 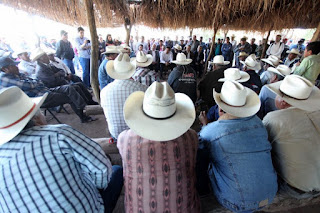 Mexico moving forward with controversial pipeline
By Andrea Arzaba
Global Voices
A new pipeline under construction in northern Mexico has become a major controversy involving the local Yaqui indigenous community, which is less that pleased about the Agua Prieta tube's route (straight through Yaqui territory). Things went from bad to worse on Oct. 21, when the pipeline's supporters attacked a group of protesters, killing one, wounding eight, and causing no small amount of property damage.
Read article at Global Voices:
https://globalvoices.org/2016/12/14/mexico-reportedly-moves-ahead-with-controversial-pipeline-despite-moratorium/
at December 14, 2016 No comments:

Mohawk Nation News
Please post & distribute.
MNN. Dec. 14, 2016. We see the enemy and evil straight in their faces. The morally insane rulers want to see us praying with our hands clasped, standing in front of the hole. Boom! We die and fall into the grave. They think they can then put the pipeline or shopping mall or a Trump casino/hotel resort over our dead bodies.

CHAIRMEN/CHIEFS & CORPO INDIANS AT THE TRIBAL TROUGH.
The veterans arrived and saw the reservations are POW camps run by the military. The corpo chairmen are the “wardens”. Lakota Inc. is fraudulently owned by the corporation and the banks. Archie angrily ordered everybody to leave.

President Lincoln was a thug. On December 26, 1862, he ordered the public hanging of 38 Sioux for demanding food for their starving people in a concentration camp.

THE YOUNGEST HANGED WAS A 12 YEAR OLD GIRL.
“ Saint Paul, Dec. 27, 1862. … I have the honor to inform you [President Lincoln] that 38 Indians … ordered by you for execution were hung yesterday at Mankato [Minnesota] at 10 a.m. Everything went off quietly The other prisoners are well secured. Respectfully, H. H. SIBLEY, Brigadier-General”.

Today Lakota Inc. chairman, Archie Archambault, and the military safeguarded the donated rations for the water protectors. They stockpiled the supplies, mail and packages in the Rock Industries Corporation warehouse, a US Defense contractor that the Lakota Tribe Inc. partners with. They supply military equipment to the National Guard and Army Reserve. The tribe supplies propane and maintains an elaborate telecommunication tower on Lakota territory. [Standing Rock Development Corporation Inc.].  Archie and the Lakota Tribe Inc. are refusing to accept all mail and packages for the water protectors.
Such deceit and mob tactics will not break our tie to our mother, each other and all life. Creation gave us the natural will to fight the corporation that is raping our mother and trying to turn her into a sewer. Courage and the truth will not let these evil people rot our planet.