Youth of the Peaks Photos Week of Action 2011 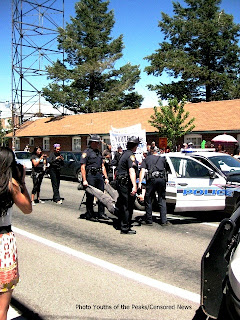 ..
Protect the Peaks Week of Action Photos by Youths of the Peaks. Thank you from Censored News!
Please join us for weekly gathering in prayer on Holy San Francisco Peaks
Every Saturday at 11 am
Drive up Snowbowl rd and you will find people gathered on the left side near the meadow.
If the location changes look for the large circle of people gathered.
All people and faiths welcome.
Visit www.TrueSnow.org for more info.
Klee Benally
indigenousaction@gmail.com | www.twitter.com/eelk
www.indigenousaction.org - Independent Indigenous Media
at August 12, 2011 No comments:

MARIANO LAKE, N.M. -- The US EPA is allowing Chevron USA Inc., access to sensitive data on the Navajo Nation, by allowing Chevron to investigate uranium contamination. Chevron is one of the world's primary exploiters and spoilers of Indigenous lands.

Navajo President Ben Shelly, however, said allowing Chevron to carry out the investigation on the Navajo Nation is a good thing.

President Shelly said, "On behalf of the communities in and around Mariano Lake, I extend my sincere appreciation for the agreement today between the U.S. EPA and Chevron. I look forward to the data that will be generated in this investigation, and I respectfully request U.S. EPA to understand our desires for the most protective clean up plans that will help restore harmony in our communities and homes."

While the EPA purports to be cleaning up uranium contamination, at the same time, corporations are targeting the Navajo Nation for more uranium mining. By giving Chevron access to geological data, soil and water data, the Navajo Nation is giving away sensitive information used by corporations for future destructive industries, including mining and oil and gas drilling.

Corporations such as Chevron have a long history of gaining access to Indian lands under the guise of cleanup or research.

The EPA was persuaded by Chevron's offer of dollars.

Under the agreement, Chevron will conduct a radiological survey and sample radium-contaminated soil throughout the 31-acre Mariano Lake Mine site and surrounding area, including 10 residences and two nearby water wells. Chevron also agreed to pay EPA's oversight costs, the EPA said in a statement.

EPA and the Navajo EPA will oversee field work, which will include construction of a fence and application of a sealant to contaminated soils where people live, work and play while the investigation is carried out. The order also requires Chevron to post signs, lock gates and prevent livestock from getting into areas of known contamination prior to cleanup, the EPA said.

The Mariano Lake Mine site operated as a uranium ore mine from approximately 1977 to 1982, and includes one 500-foot deep shaft, waste piles, and several surface ponds. Exposure to elevated levels of radium over a long period of time can result in anemia, cataracts, fractured teeth, and cancer, especially bone cancer.

The EPA said that Chevron is the fifth "responsible party" that the EPA has required to take actions at former uranium mines on the Navajo Nation.

Indigenous Peoples, however, have plenty of proof that Chevron is not a responsible party.

The EPA said the work with Navajo Nation is to identify and enforce against responsible parties is part of a 5-year plan to address the problem, which can be found at http://www.epa.gov/region9/superfund/navajo-nation/

Holiday Toy Drive To benefit children in communities on southern O’odham lands for Children 2 to 15 years old. Only, gender-neutral toys, No...