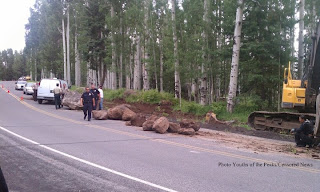 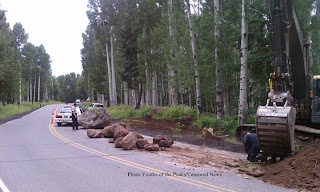 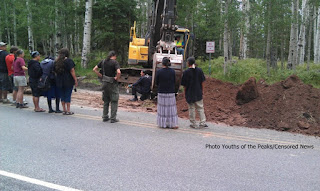 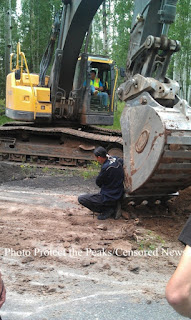 Protect the Peaks, Saturday, Aug. 13, 2011. The ongoing efforts are to halt the desecration of sacred San Francisco Peaks. Photos by Youths of the Peaks for Censored News, on as it happened.
By Brenda Norrell

The destruction is part of the development of Arizona Snowbowl ski resort, which is digging into the earth and clearcutting for a pipeline to carry sewage water for snowmaking on the sacred mountains.

Flagstaff author Mary Sojourner and Protect the Peaks police liaison Rudy Preston were arrested at the scene. Preston was charged with two counts of disorderly conduct and one count of trespassing.

Sojourner was charged late Saturday at the Coconino County Jail. Preston and Sojourner were bailed out of jail late Saturday. Benally was cited for disorderly conduct and released.

Before today's action, 17 people were arrested in the past eight days, as Navajo, Hualapai, Hopi, O'odham and other Native Americans have been protesting the destruction of the sacred mountains.

The Arizona Snowbowl plans to make snow for tourists on the sacred mountain using recycled waste water. Thirteen Native American Indian Nations hold the mountains sacred. Medicine men gather healing plants and conduct ceremonies on the mountains.
Already, there is clearcutting of the old growth forests for the pipeline and tourist developments.