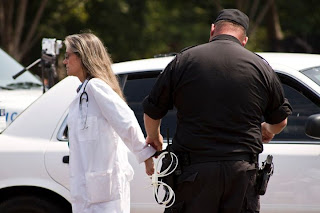 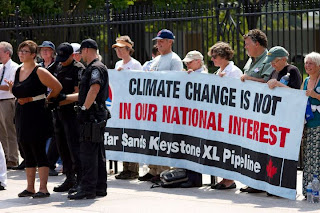 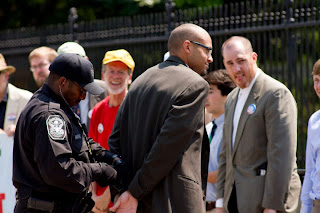 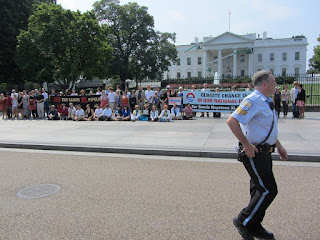 By Tar Sands Action
www.tarsandsaction.org
Photos Shadia Fayne Wood
Sunday, Aug. 21, 2011
WASHINGTON - Fifty more Americans were arrested this morning at the White House as fifty of their fellow protestors were held in jail in an attempt to “deter future participants” (1) from participating in an ongoing sit-in at the White House to push President Obama to deny the permit for a massive new tar sands oil pipeline.

Writer and environmentalist Bill McKibben, who is spearheading the protests, sent a message from jail last night, “The only thing we need is more company. We don’t need your sympathy, we need more company.”

This morning’s sit-in featured participants from as far away as Montana and North Dakota to risk arrest defending their air, water and climate. A group of doctors from Chesapeake Physicians for Social Responsibility wore their white lab coats as they stood at the White House fence waiting to be arrested.

The ongoing protests have helped turn fight over the proposed Keystone XL pipeline into President Obama’s most important environmental decision before the 2012 election. Many of the participants in the sit-in this morning wore “Obama 2008” buttons as a statement that they want back the candidate who promise to take on climate change and help end our dependence on fossil fuels.

McKibben was amongst those arrested yesterday, along with the co-founder of NRDC and former White House official Gus Speth, gay rights activist Lt. Dan Choi, author and activist Mike Tidwell, Firedoglake founder Jane Hamsher, and many others.

“Saturday’s arrests and overnight jailings are already lighting a fire,” said Mike Tidwell, director of the Chesapeake Climate Action Network, who was also arrested Saturday. “More people are now inspired, determined, and committed to join. On Monday alone over 20 DC-area doctors, lawyers and students will be going to jail to chant, sing, and stop the pipeline. They’ll be joining Nebraska ranchers and others nationwide. Word is spreading.”

Harriet Korim Arnoldi, a folk musician from Cape Cod, was arrested today and she celebrated her 65th birthday in handcuffs.

1. US Park Police told event organizers that they want to “deter future participants.” A full description of the situation is at tarsandsaction.org/not-deterred
at August 21, 2011 No comments: