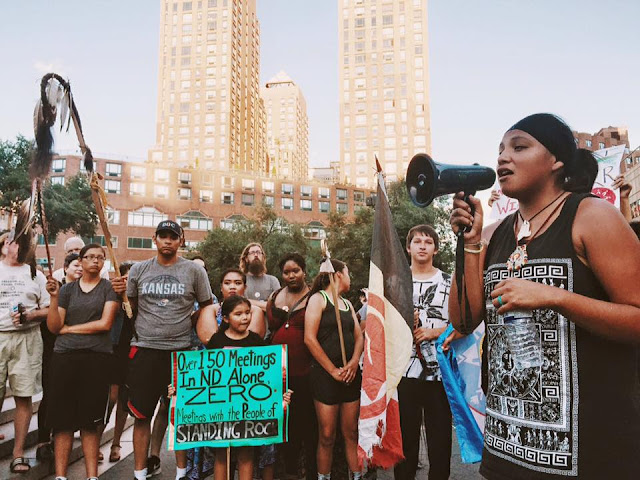 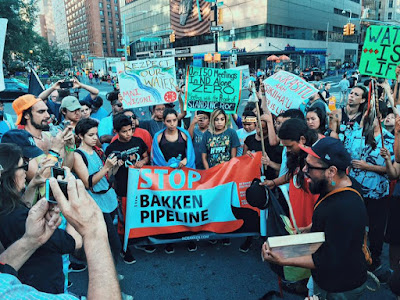 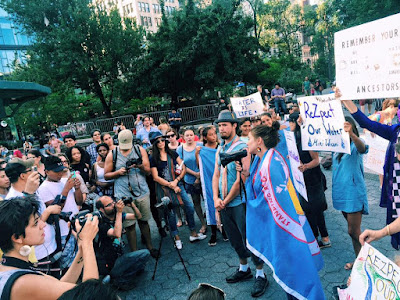 As Native youths protest at White House and in New York City's Union Square, a new dirty pipeline route is exposed from North Dakota to the Gulf Coast

The Native youth runners from Standing Rock in North Dakota protested in front of the White House on Saturday, and then protested at Union Square in New York City, as they battled the Dakota Access Pipeline now threatening the Missouri River.
The Native runners ran 1,500 miles to Washington with the messages, "Protect sacred water," and "You can't drink oil."
They captured news headlines across across the country, including Democracy Now and People magazine. 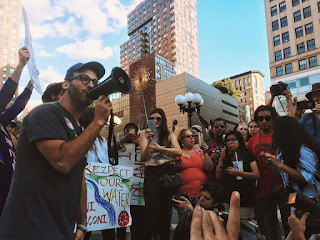 In New York City, the Native youth runners were joined by Josh Fox (Gasland, Gasland II, How to Let Go of The World And Love All The Things Climate Change Can’t Change), Shailene Woodley (The Descendants, Divergent), and Rosario Dawson.The Youth of Standing Rock Indian Nation ran 1,500 miles from North Dakota to Washington, D.C. to protect their water from the Dakota Access Pipeline, a crude oil pipeline being built on their river. They arrived in Washington, D.C. on Saturday, August 6, the runners said in a statement from New York City."The Standing Rock Reservation Youth finished the run from North Dakota to Washington D.C in protection for the waters. The proposed Dakota Access Pipeline has just been recently approved by the U.S. Army Corps of Engineers who are already starting construction in the Dakotas. The runners peacefully demonstrated their opposition, their message is not that it’s not a matter of if the pipeline breaks, but WHEN the pipeline breaks. They hand delivered a petition with 140,000 signatures saying no to the Dakota Access Pipeline.""According to UP to US who coordinated the Youth Rally in Union Square today: “What’s very different about this specific pipeline is that it runs directly through the third largest reservation in this country. And when that crude oil transport pipeline breaks it will absolutely destroy many if not all of PEOPLE’s resources that they need to live. Standing Rock natives have a saying “Mni Wiconi,” which means: water is life, and they couldn’t be more on point.”

Back home in Cannonball, North Dakota, Dakota, Lakota and other Native Americans at the Sacred Stone camp are prepared. 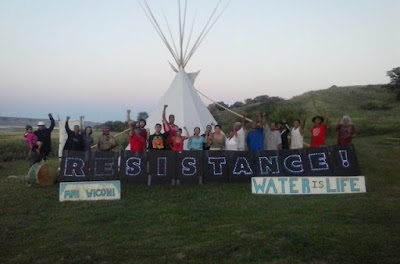 Joye Braun, Cheyenne River Lakota, said, "Dakota Access has issued a 48 hour work order that was received by Standing Rock."
"The Camp of the Sacred Stones is a peaceful camp in prayer to stop the pipeline from destroying sacred water, eagle nesting sites, buffalo grazing, medicinal plants, and to protect the water intake for Standing Rock and the people along the Missouri river.
"We absolutely do not believe in violence," Braun told Censored News.
Braun was among those protesting at the North Dakota Capitol last week to bring awareness that oil is bankrupting our future.
"The North Dakota legislature was trying to fix a budget shortfall that was caused by giving tax breaks and a blank check to the oil industry."
"Projects like Dakota Access pipeline and continued fracking are not helping the state but harming it."
A new pipeline deal is now taking over where the Keystone XL pipeline failed. This new corporate scheme is to transport large amounts of dirty crude oil from North Dakota to the Gulf Coast.

Enbridge, the largest pipeline company in Canada, is teaming up with U.S. refiner Marathon Petroleum Corp. to buy a 49 per cent stake in two pipelines, the Dakota Access Pipeline and the Energy Transfer Crude Oil Pipeline, to provide a new route from North Dakota to refineries in Louisiana and Texas.
Canadian oil producers have been pushing for more access to Gulf Coast refineries for years, but had their biggest hopes dashed in 2015 when Obama rejected TransCanada Corp.’s application to build the 890,000-barrel-per-day Keystone XL pipeline.
This week’s deal by Enbridge, however, will allow more Canadian crude and oilsands barrels to flow to those Gulf Coast refineries.
Read full article at Financial Post

Zapatistas 'The Art that is neither seen nor heard' 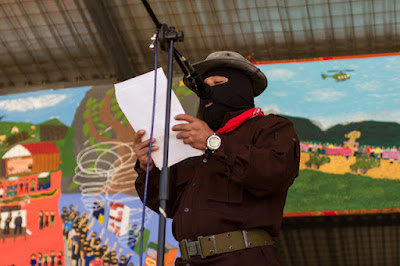 THE ART THAT IS NEITHER SEEN NOR HEARD.(Note: the following are the comments made by Subcomandante Insurgente Moisés to mark the conclusion of the Zapatista’s contribution to the CompArte, in the Caracol of Oventik, on July 29, 2016. The threat of rain and the pressure of time did not allow for the compañero to fully develop some of his points and there were others that he was unable to touch on at all. Here we present the original version that he was going to give. In his voice, our Zapatista word).THE ZAPATISTA ARMY FOR NATIONAL LIBERATIONMEXICO.July 29, 2016
http://enlacezapatista.ezln.org.mx/2016/08/08/the-art-that-is-neither-seen-nor-heard/

......... Dance number: “The Dance of the collective work of Maize.” Choreography by the Zapatista bases of support of the Altos Zone in Chiapas. This is the version that they presented during the selection process. For the presentation on July 29 in Oventik they added a few more things, as those who were there got to see. Maybe in the compa media they have a video of July 29 in Oventik....... Poetry: “When the Horizon looks to tomorrow.” Written by a young Zapatista base of support from the Altos Zone in Chiapas. This is the version that he presented in the selection process. When he presented it, he was told that there would be a lot of people there, but not to get nervous. “Keep your eyes on your notebook and don’t look up,” they recommended. He said that he wasn’t scared but he was confused about one thing. “What is it?” they asked him. He said, “I don’t know if you are supposed to say ‘poem’ or ‘poetry’. And so we ask you for a reply to his question.
at August 08, 2016 No comments: