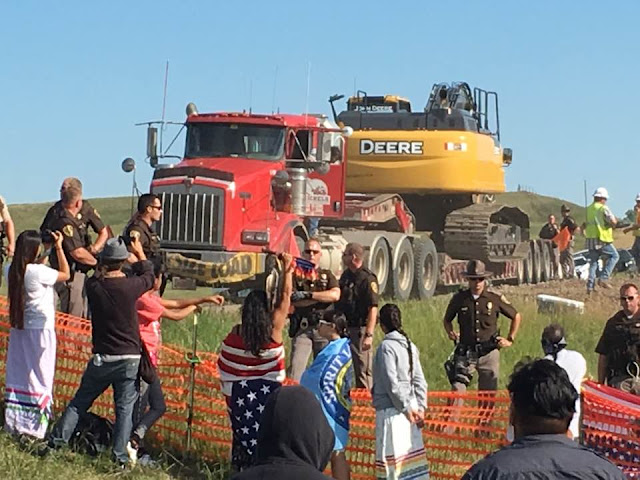 The face of Apartheid in Palestine, heavy machinery by John Deere, on Dakota Lakota land at the blockade of the Dakota Access pipeline in Cannon Ball, North Dakota, where 12 were arrested yesterday.
Photo by Jon Eagle, Sr. 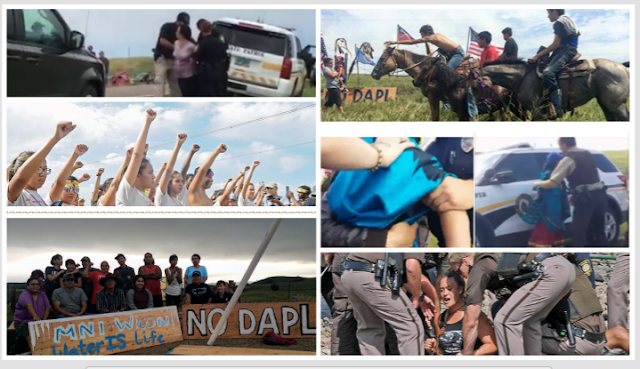 Dakota and Lakota women and youths on the frontline as 11 were arrested Thursday defending sacred land and water from Dakota Access pipeline in Cannon Ball, North Dakota. 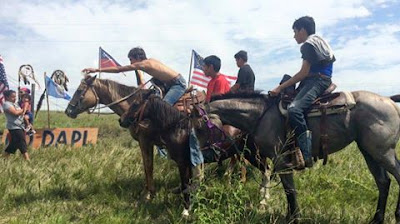 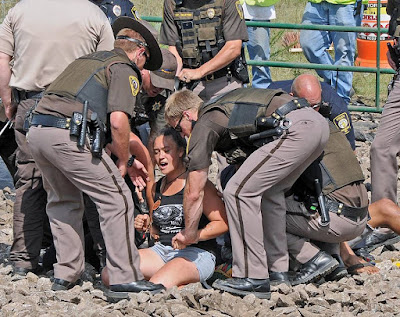 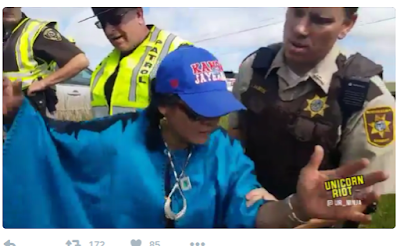 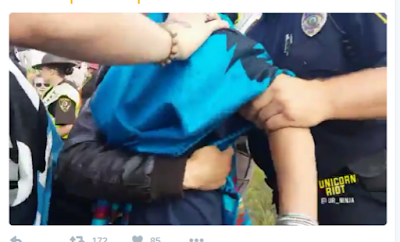 Watch video above: Reinforcements on horseback and the Drum! 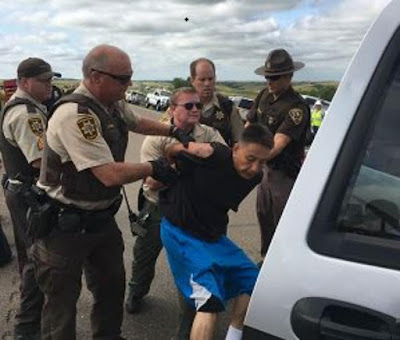 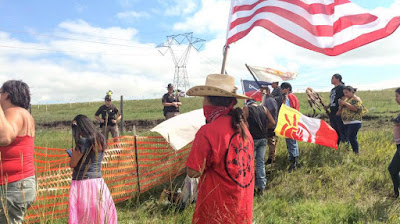 Above: Dakota and Lakota children and youths
who ran to DC and protested at White House,
and New York City, joined blockade today. 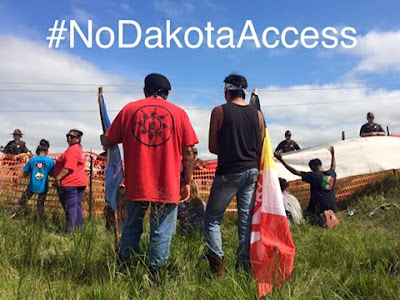 
"The place where pipeline will cross on the Cannonball is the place where the Mandan came into the world after the great flood, it is also a place where the Mandan had their Okipa, or Sundance. Later this is where Wisespirit and Tatanka Ohitika held sundances. There are numerous old Mandan, Cheyenne, and Arikara villages located in this area and burial sites. This is also where the sacred medicine rock [is located], which tells the future.”

I read one of the news stories in the Sioux Falls Argus Leader and the reporter kept saying that the water protectors were outside reservation boundaries. Like"go back to the reservation" Indians. That is one of the reasons Native America must write their own stories .. The water protectors are standing their ground in 1868 Treaty Territory, which if the reporter knew their U. S. Constitution, is supreme law, above and before the Congress and the U. S. Courts. And as for the Army Corps, they are also ignoring treaty and Winters Doctrine Rights of the Lakota/Dakota Oyate who are protecting the Missouri River from a $3 billion dollar pipeline that will run 470,000 gallons of crude Bakken oil a day across the Mni Sose. It's not if it will leak but when, and there are 12 million people downriver that also rely on that river for drinking water, not to mention the wildlife that rely on the river. So I'm proud of and praying for our people, humble and pitiful as they are for taking on Big oil when every card in the deck is stacked against them. History will show they made the right choice. But sadly it will be after the river is contaminated and drinking water is fouled and wildlife and fish and the winged nation start dying from the contamination. Then the oil company will pack it's bags and move on and the U.S. EPA will cry that it doesn't have the money to clean up the river. So yes, stand strong Oyate.

Tipiziwin Tolman, Standing Rock
Standing Rock is my home. I grew up where the Missouri meets the Porcupine Creek. We are Hunkpapha Lakota and Wiciyena Dakota - We are Sitting Bull's people among many others. We are the people who have always lived along the Missouri river, on both banks. Our history is tied to this water, our identity is tied to this water. We come from this water - We were never displaced, this is where Creator put us. This water and this land recognizes our language and our prayers. This water, like all water gives us life and we all need water to live. This pipeline and all the oil fracking is pure POISON. Please come to Standing Rock's northern border and stand to protect this pipeline from being built underneath our water, directly above our water intake where our drinking water comes from. When you turn on a faucet today, think of our people and what we are standing for. Calling for all Oceti Sakowin, all nations, to come stand together - come to the northern border of Standing Rock and stand for the future, be a witness for the water, and for the world. (Please share if you can, please pray if you can, please come if you can.)

The Standing Rock Sioux Tribe by resolution claim all stone features, stone cairns and stone effigies within the aboriginal homelands of the Oceti Sakowin. Wherever the buffalo roamed our ancestors left evidence of their existence and connection to everything in the universe. There is a prophesy among our people that told us one day man was going to go to far and when that time came the animal nations were going to show their sacred color. The birth of the white buffalo in Jamestown, ND was a sign that we were in that time of prophesy. The Dakota Access Pipeline is crossing the aboriginal homelands of the Oceti Sakonwin and is destroying sites of religious and cultural significance to the tribes. DAPL will have an adverse effect on the land, the air and the water. Now is the time to go back to our sacred places and pray.

No Dakota Access in Treaty Territory - Camp of the Sacred Stones

Please donate to our legal fund to continue our resistance to Dakota Access.
https://fundrazr.com/d19fAf

The Dakota Access pipeline will go through South Dakota and Iowa enroute to the Gulf Coast. Boycott all these corporations:

The pipeline, currently under construction, will connect western North Dakota to the Energy Transfer Crude Oil Pipeline Project (ETCOP) in Patoka, Illinois. From there, it will connect to the Nederland and Port Arthur, Texas, area, where refiners including Valero Energy, Total and Motiva Enterprises operate some of the largest U.S. refining facilities. source
. 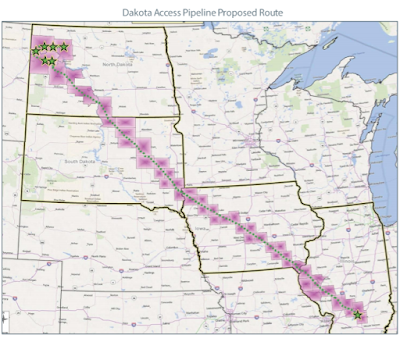 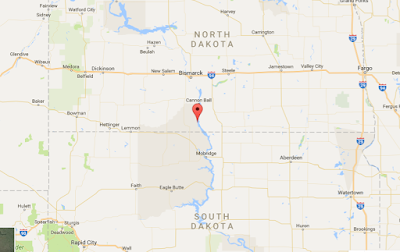 mother earth’s children of great turtle island lead the march of thousands of people to establish world peace.
The land and funds of the rotino’shonni [Iroquois} were used to build McGill University of tsionii’tio’tiakon [Montreal]. The women seized it in 2015. The proposed new name is “kaia’nere:kowa University“, World Peace University.  [Read story and sign petition.]:
Story: PDFDidYouKnow-English.p#160A8EE
Sign Petition and post: http://chn.ge/2b8ztLX
The first World Social Forum happened in 1710 when the five chiefs were sent to London England to initiate world peace. We have a common enemy, the hierarchical banking system that is destroying our mother earth. It violates the original instruction to survive and co-exist with nature.

rotino’shonni:onwe chiefs on world social forum 1710.
As Michael Jackson sings: “We are the world, we are the children. We are the ones who make a brighter day. So let’s start giving. There’s a choice we’re making. We’re saving our lives. It’s true we’ll make a better day, just you and me.”
ALERT: PayPal has taken all of MNN’s funds [$165] without explanation. They are asking for payment to close down account. MNN Mohawk Nation News kahentinetha2@yahoo.com for more news, to donate and sign up for MNN newsletters, go to mohawknationnews.com More stories at MNN Archives. thahoketoteh@ntk.com Address: Box 991, Kahnawake [Quebec, Canada] J0L 1B0 or original Mohawk music visit https://soundcloud.com/thahoketoteh
Video on perceived American “exceptionalism”. Americans think they can kill anyone who doesn’t believe in their philosophy.
Ontario Hydro sued for theft.
HITLER http://wakingtimesmedia.com/mainstream-admits-hitler-never-killed-allowed-escape-died-old-man/
at August 12, 2016 No comments: