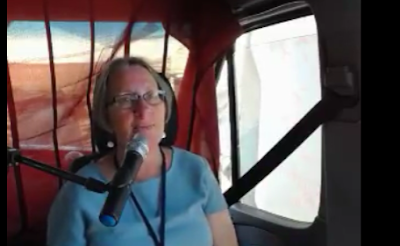 Standing Rock Resistance Radio, Spirit Radio, is live on the air in camp at 87.9 FM

The U.S. Army Corps of Engineers altered the flow of the river here, where the Missouri and the Cannon Ball rivers come together. A whirling current here once created smooth stones, sacred stones, before the river was altered. -- Carol Raffensperger, environmental engineer

(Sorry, there are almost two silent minutes at the beginning of this interview.) Article by Brenda Norrell
Censored News
CANNON BALL, North Dakota -- Carol is with the Science and Environmental Network. Carol describes the 'Precautionary Principle,' reflects the Indigenous Peoples protection of future generations. This principle is for the protection of the earth, river and future generations. The public health community has grasped this concept of health prevention. This principle means taking action to prevent harm. She talks about alternatives to moving oil through pipelines through rivers. She describes how the U.S. Corps of Engineers did not carry out an environmental impact statement on the Dakota Access Pipeline, which is an argument within the Standing Rock Sioux's legal case in federal court on Wednesday, Aug. 24, 2016. She describes how in Iowa land owners are fighting the Dakota Access Pipeline from seizing their land by way of eminent domain.
Carol says one day there will be a plaque here for this movement which has unified the people.
"This historic gathering happened here.: She said this place will be remembered, when fossil fuels are replaced with something that is sane and reverent.
Recorded by Govinda of Earthcycles live at Standing Rock camp in the mobile 87.9 FM radio van.
Carolyn Raffensperger, M.A., J.D.Carolyn is executive director of the Science and Environmental Health Network. In 1982 she left a career as an archaeologist in the desert Southwest to join the environmental movement. She first worked for the Sierra Club where she addressed an array of environmental issues, including forest management, river protection, pesticide pollutants, and disposal of radioactive waste. She began working for SEHN in December 1994. As an environmental lawyer she specializes in the fundamental changes in law and policy necessary for the protection and restoration of public health and the environment.Carolyn is co-editor of Precautionary Tools for Reshaping Environmental Policy published by M.I.T. Press (2006) and Protecting Public Health and the Environment: Implementing the Precautionary Principle, published by Island Press (1999). Together, these volumes are the most comprehensive exploration to date of the history, theory, and implementation of the precautionary principle. Carolyn coined the term "ecological medicine" to encompass the broad notions that both health and healing are entwined with the natural world. She has served on editorial review boards for several environmental and sustainable agriculture journals, and on USEPA and National Research Council committees. She wrote a bimonthly column for the Environmental Law Institute's journal Environmental Forum from 1999 until 2008.

Standing Rock Resistance Radio -- Osprey Orielle Lake of WE CAN

Osprey Orielle Lake speaks on the need to protect nature with system change. Osprey describes the roots of the Rights of Nature movement in Bolivia and Ecuador, and today's reforestation efforts with women in the Congo. She describes the violence of the man camps in the Bakken oil fields of North Dakota, where Indigenous women are the victims of rape at a high rate. Recorded live in Standing Rock camp by Govinda in the mobile 87.9 FM van in camp. "Love water, not oil," she said, praising those here putting themselves on the line for water. 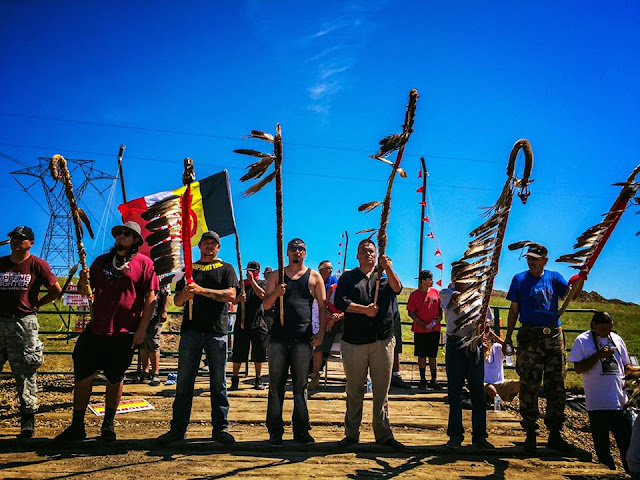 Federal and state agents repress, and media manipulates facts, endangering Native Americans at Standing Rock camp
By Brenda Norrell
Censored News
CANNON BALL, North Dakota -- Thousands of Native Americans gathered to protect the Missouri River from the Dakota Access Pipeline now face aggressive state repression and media manipulation. Outrageous claims by the State of North Dakota and police, and media manipulation, is now endangering those camped at Standing Rock with the Dakotas and Lakotas.Native Americans at Sacred Stones Camp said that Governor Jack Dalrymple declared a State of Emergency in order to make additional state resources available to “manage public safety risks associated with the protest," Native Americans said in a group statement.Dalrymple has complained of “outside agitators” responsible for “hundreds of criminal acts,” and called on federal officials to help.However, LaDonna Allard, director of the Camp of the Sacred Stones, says, “The gathering here remains 100 percent peaceful and ceremonial, as it has from day one. We are standing together in prayer. No firearms or weapons are allowed.""Why is a gathering of Indians so inherently threatening and frightening to some people?” Allard said.Morton County Sheriff Kyle Kirchmeier last week announced outrageous, unsubstantiated claims of “pipe bombs” and gun violence at the protest site. Sheriff Kyle’s unsubstantiated claims has led people to fear for their safety.The ACLU of North Dakota states that the current roadblock south of Mandan, North Dakota, is a violation of free speech and violates rights.The ACLU said, "Peaceful protest is at the core of the First Amendment and restrictions to such activity, such as the closing of highways with the effect of preventing assembly or effective messaging of protesters, should be viewed skeptically. Law enforcement agents have a duty to ensure that the rights of protesters are protected, not just the rights of corporations."The unsubstantiated claims include allegations of “laser strikes” at planes overhead.However, Native Americans continue their defense of the Missouri River in ceremony and prayer.“We, the Indigenous defenders of the land and water within the traditional treaty lands of the Oceti Sakowin, make an urgent appeal to the international community to assist us in facing a human rights crisis. Dakota Access is trying to put a crude oil pipeline under the Missouri River. This is a dire threat to the drinking water and future generations of the Oceti Sakowin who have lived here for generations,” Native Americans said in the group statement.With an urgent call for help, the legal team in the Standing Rock camp has issued a call for international observers to be present.“For the past few days there has been unidentified aircraft circling the camp and we've been surrounded by federal and state police. We believe the elders, women and children present at this peaceful assembly could be under threat and in danger of imminent harm and possible violence from state and federal police (including Homeland Security) as well as private security. The Governor of North Dakota has issued a state of emergency and closed roads and restricted freedom of movement. We are unarmed.  We do not have cell phone service or wifi.  We are unable to communicate and document for the world community this peaceful assembly.”“We are committed to peaceful defense of our water and our territory.“We urgently seek national and international human rights observers to come.  We need United Nations' rapporteurs, NGOs (especially Indigenous NGOs), and Churches, to be aware of the rapidly escalating dangers facing this peaceful gathering. Please come and bear witness.”From their teepees, Oyate at Red Warrior Camp of Owe Aku International Justice Project point out that Dakota Access Pipeline is violating the Declaration on the Rights of Indigenous Peoples, which states Indigenous Peoples are to give "free, prior and informed consent" before destructive development enters their territories. A campaign of divestment, boycott and sanctions is underway of those investing in the Dakota Access Pipeline, including Enbridge of Calgary, Alberta, Marathon and Phillips 66.Read more at Censored News www.bsnorrell.blogspot.com
at August 23, 2016 No comments: