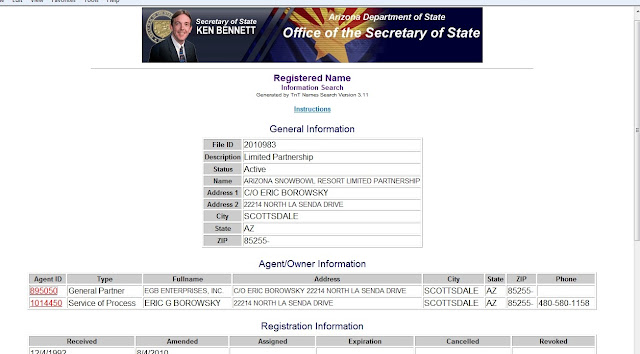 1986 special use permit for the Snowbowl reveals original owners 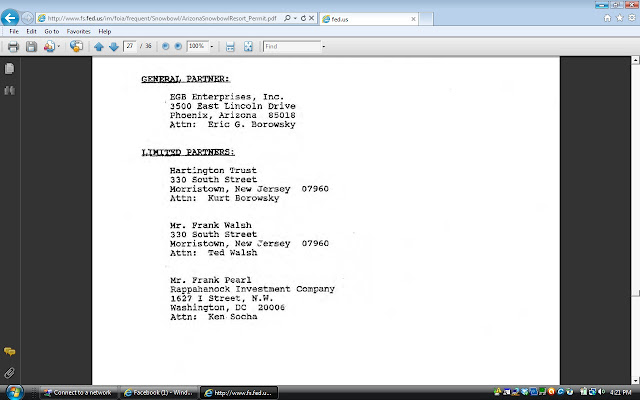 By Brenda Norrell
Censored News
http://www.bsnorrell.blogspot.com
Facebook halted two posts exposing the fact that the owner of the Arizona Snowbowl, now destroying sacred San Francisco Peaks, lives in Scottsdale, not in Flagstaff. The ownership of corporations in Arizona is public information.
On Wednesday night, Facebook blocked this as a status update: "The owner of the Arizona Snowbowl doesn't even live in Flagstaff, according to Arizona State. Eric Borowsky lives in Scottsdale -- so he obviously doesn't care how he wrecks the San Francisco Peaks or ruins the environment of Flagstaff."
The link to the Arizona State link for Snowbowl ownership was also disabled: http://www.azsos.gov/scrip​ts/TNT_Search_engine.dll/Z​oomTNT?NME_ID=2010983&NME_​CODE=1LP

On Thursday morning, Facebook blocked posting the above screen capture, which shows the owner of the Arizona Snowbowl. (The image is a common jpeg, so there is no reason to block this image.)
The question remains how Facebook screens information so immediately to censor it, and why Facebook is preventing this information from being posted as a status update or image.
Meanwhile, a week of action to halt the Snowbowl ski resort damage resulted in the arrests of 17 area young people, including Navajos and Tohono O'odham, who were willing to be arrested to halt the destruction to sacred San Francisco Peaks, and the planned snow making for tourists out of sewage water.
This document online also reveals the 1986 special use permit for the Snowbowl and its original owners:
http://www.fs.fed.us/im/foia/frequent/Snowbowl/ArizonaSnowbowlResort_Permit.pdf
Already, the pipeline has resulted in clearcutting of the old growth forest.
High Desert Investment Company in Flagstaff is responsible for the clearcutting.
High Desert Investment Company clear cutting San Francisco Peaks is owned by G Allen Ribelin, who also owns Ribelin Residential Rentals and High Investment Logging. The logging company is located at 1349 N. Wakonda St and 504 E. Butler Ave., according to the Arizona Corporation Commission.
--brendanorrell@gmail.com
Double click on images to enlarge.