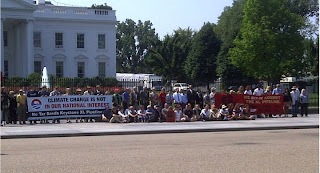 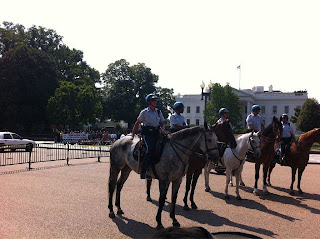 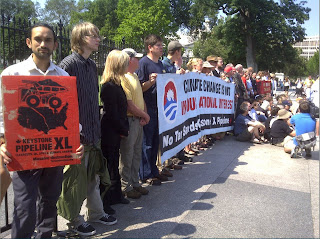 White House protesters being held until Monday, at least 50 more prepare for Sunday morning sit in


Letter from Scientific Experts to President Obama Regarding Authorization of the Keystone XL Pipeline:

The Honorable Barack Obama
President of the United States
The White House
1600 Pennsylvania Avenue, N.W.
Washington, D.C. 20050
August 3, 2011
President Obama:
We are researchers at work on the science of climate change and allied fields. We are writing to add our voices to the indigenous leaders, religious leaders, and environmentalists calling on you to block the proposed Keystone XL Pipeline from Canada’s tar sands.
The tar sands are a huge pool of carbon, but one that does not make sense to exploit. It takes a lot of energy to extract and refine this resource into useable fuel, and the mining is environmentally destructive. Adding this on top of conventional fossil fuels will leave our children and grandchildren a climate system with consequences that are out of their control. It makes no sense to build a pipeline system that would practically guarantee extensive exploitation of this resource.
When other huge oil fields or coal mines were opened in the past, we knew much less about the damage that the carbon they contained would do to the Earth’s climate system and to its oceans. Now that we do know, it’s imperative that we move quickly to alternate forms of energy—and that we leave the tar sands in the ground. We hope those so inclined will join protests scheduled for August and described at tarsandsaction.org.
If the pipeline is to be built, you as president have to declare that it is “in the national interest.” As scientists, speaking for ourselves and not for any of our institutions, we can say categorically that it’s not only not in the national interest, it’s also not in the planet’s best interest.
Sincerely,
James Hansen
Research Scientist
The International Research Institute for Climate and Society
The Earth Institute, Columbia University
John Abraham
Associate Professor, School of Engineering
University of St. Thomas
Dean Abrahamson
Professor Emeritus, Energy & Environment Policy
University of Minnesota
David Archer
Professor, Geophysical Sciences Department
The University of Chicago
Jason Box
Associate Professor, Department of Geography
Atmospheric Sciences Program
Researcher at Byrd Polar Research Center
The Ohio State University
Ken Caldeira
Senior Scientist
Department of Global Ecology
Carnegie Institution
Peter Gleick
President and Co-founder
Pacific Institute for Studies in Development, Environment, and Security
Richard A. Houghton
Senior Scientist
Woods Hole ResearchCenter
Robert W. Howarth
David R. Atkinson Professor of Ecology & Environmental Biology
Cornell University
Ralph Keeling
Director, Scripps CO2 Program
Scripps Institution of Oceanography
Donald Kennedy
President Emeritus and Bing Professor of Environmental Sciences, Emeritus
Institute for International Studies
Stanford University
Michael MacCracken
Chief Scientist for Climate Change Programs
Climate Institute
Michael E. Mann
Professor of Meteorology
Director, Earth System Science Center
The Pennsylvania State University
James McCarthy
Alexander Agassiz Professor of Biological Oceanography
Harvard University
Michael Oppenheimer
Albert G. Milbank Professor of Geosciences and International Affairs
Woodrow Wilson School and Department of Geosciences
PrincetonUniversity
Raymond T. Pierrehumbert
Louis Block Professor in the Geophysical Sciences
The University of Chicago
Steve Running
Professor of Ecology, Director of Numerical Terradynamics Simulation Group
Department of Ecosystem and Conservation Sciences
College of Forestry and Conservation, University of Montana
Richard Somerville
Distinguished Professor Emeritus and Research Professor
Scripps Institution of Oceanography
Ray J. Weymann
Director Emeritus, Carnegie Observatories
Member, National Academy of Sciences
George M. Woodwell
Founder, Director Emeritus, and Senior Scientist
Woods Hole Research Center
Earlier post:
Ehrlich on Schneider: Being a scientist doesn’t relieve one of the obligations of a citizen