Published on Jul 1, 2013
Oglala Sioux tribal President Bryan Brewer Sr put a call out to the Lakota Nation to come together and support his efforts in stopping the sales of alcohol right next to our reservation, he had many support and here in this video he gives us a few short words.
at July 01, 2013 No comments:

CLASSMATES IV.
OUR TEACHERS WILL NOT BE PRESENT. 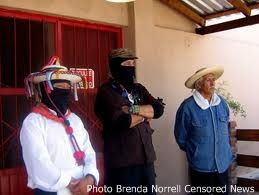 Wikileaks: Snowden applies for asylum in these countries

Statement from Edward Snowden in Moscow

Statement from Edward Snowden in Moscow via Wikileaks

One week ago I left Hong Kong after it became clear that my freedom and safety were under threat for revealing the truth. My continued liberty has been owed to the efforts of friends new and old, family, and others who I have never met and probably never will. I trusted them with my life and they returned that trust with a faith in me for which I will always be thankful.
On Thursday, President Obama declared before the world that he would not permit any diplomatic "wheeling and dealing" over my case. Yet now it is being reported that after promising not to do so, the President ordered his Vice President to pressure the leaders of nations from which I have requested protection to deny my asylum petitions.This kind of deception from a world leader is not justice, and neither is the extralegal penalty of exile. These are the old, bad tools of political aggression. Their purpose is to frighten, not me, but those who would come after me.
For decades the United States of America has been one of the strongest defenders of the human right to seek asylum. Sadly, this right, laid out and voted for by the U.S. in Article 14 of the Universal Declaration of Human Rights, is now being rejected by the current government of my country. The Obama administration has now adopted the strategy of using citizenship as a weapon. Although I am convicted of nothing, it has unilaterally revoked my passport, leaving me a stateless person. Without any judicial order, the administration now seeks to stop me exercising a basic right. A right that belongs to everybody. The right to seek asylum.
In the end the Obama administration is not afraid of whistleblowers like me, Bradley Manning or Thomas Drake. We are stateless, imprisoned, or powerless. No, the Obama administration is afraid of you. It is afraid of an informed, angry public demanding the constitutional government it was promised — and it should be.
I am unbowed in my convictions and impressed at the efforts taken by so many.
Edward Joseph Snowden
Monday 1st July 2013
at July 01, 2013 No comments: 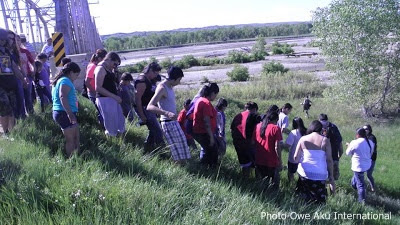 Moccasins on the Ground at Takini on the Cheyenne River Reservation
by Owe Aku International Justice Project
Censored News
http://www.bsnorrell.blogspot.com 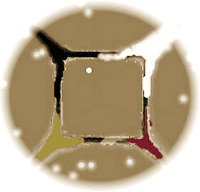 July 1, 2013 In our effort to be true to our principal objective to preserve sacred water and protect Ina Maka for future generations, working within the protocol of our traditions and responsibilities must always be our first priority.  While journeying through the land after the Cheyenne River Moccasins on the Ground training, Obama made indications that he will not approve the Keystone XL Pipeline.  That would be a great victory.  However, our victory does not come until all sacred water is protected from tarsands, uranium mining, coal extraction and the myriad ways fat takers destroy Ina Maka.

The Moccasins on the Ground Tour of Resistance, in conjunction with many allies and relatives, was on the move again with more non-violent direct action training on the Cheyenne River territory of the Lakota Nation from June 14th through 16th.  These educational and informative gatherings are designed to prepare people to protect water and their communities in opposition to the Keystone XL Pipeline (“KXL”) proposed by Transcanada currently under review by the Obama administration (the first application was denied in January 2012).

The Pipeline’s construction is in itself dangerous to communities along the route and the slurrying process is known to be hazardous to ground and surface water.  Dozens of “man camps” will be set up to house the thousands of Union workers imported to run the enormous equipment used to claw holes in the Earth.  These camps are reputed to bring prostitution, trafficking of women and children, violence, and deaths from equipment/truck drivers not experienced in operating big haul trucks in isolated areas. If the KXL becomes operational, the bitumen, which is what the tarsands oil is called, must be heated to over 150 degrees Fahrenheit, resulting in the KXL pipes being 16 more times likely to rupture than regular crude oil lines.  This is no ordinary oil.  It contains dozens of toxic chemicals that are not only used in extracting oil from the rock but also in melting the bitumen to force it through the pipes.  It is not a question of whether or not the Pipeline will leak but rather when, where and how much will be leaked. Tantoo Cardinal, who was introduced by Debra White Plume and is on the frontline of resistance in her own homeland, talked personally about it:

“I am from the area around the Tarsands mine and I’m here to tell you the water is contaminated for at least 100 kilometers all around the mine site.  We are like the polar bears who are also being threatened by climate change because the ice flows they depend on get smaller and smaller; our territory shrinks from government and corporate assaults by the fattakers and we are left with less and less.”  (Tantoo Cardinal)
The oil spill in Mayflower, Arkansas consisted of tarsands bitumen and to hide the destruction from the public and media, a news blackout was enforced by militarized police and national guard while a no-fly zone was enforced to make sure no photographs of the devastation were released.  This is just one of dozens of leaks that has happened.

The Moccasins on the Ground training in Bridger was on the traditional 1851 and 1868 treaty territory of the Lakota Oyate (called the Sioux Nation by the uninitiated).  Treaty status is recognized under international law as well as by the United States, although the US government is famous for the ongoing violations to all the treaties it has made with Red Nations as well as with other nations around the world.  The treaties identify the inherently sovereign land of the Lakota people and preserve that land for Lakota people to exercise a responsibility for protecting sacred water for future generations.  This is Lakota law and tradition.

“I’m in South Dakota today, sort of a ground zero for the XL Keystone Pipeline, that pipeline, owned by a Canadian Corporation which will export tar sands oil to the rest of the world. This is the heart of the North American continent here. Bwaan Akiing is what we call this land-Land of the Lakota. There are no pipelines across it, and beneath it is the Oglalla Aquifer wherein lies the vast majority of the water for this region. The Lakota understand that water is life, and that there is no new water. It turns out, tar sands carrying pipelines are sixteen times more likely to break than a conventional pipeline, and it seems that some ranchers and Native people, in a new Cowboy and Indian Alliance, are intent upon protecting that water.”  (Militarizing Fossil Fuels in the East, Winona LaDuke with Frank Molley, see http://westcoastnativenews.com/when-drones-guard-the-pipeline/.)
The Pipeline will cross the territory of the Lakota Oyate for hundreds of miles.  Not only does it pass over the Oglala Aquifer, it crosses the Mni Wiconi Project which supplies drinking water to the Cheyenne River, Rosebud, and Pine Ridge Indian Reservations.

“Our people are suffering way beyond their age.  Illnesses caused by poisoned water and the weight of the trauma from generations of suffering lie under the sicknesses that plague us.  This Pipeline is just one more step in their attempts to remove us from the land.” (Nina Washtay, Idle No More).
Non-violent direct action, the right to assembly and the right to free speech are all principles being employed by Owe Aku and its allies in an attempt to take action to protect sacred water which goes beyond proclamations, petitions and resolutions.  At Moccasins on the Ground a National Lawyer’s Guild attorney explained that rights normally reserved under the U.S. Constitution are not only threatened but have been virtually annihilated.  Under the Patriot Act any interference with state, local or national policy is considered an act of terror.

“Twenty years ago this region was determined to be a national sacrifice area.  You cannot regulate the Pipeline.  All you can do is stop it but protection under traditional law or treaty law will not be from the courts.  It’s easy to define legal rights [for participants] in non-violent direct action:  there are none left.”
As evidenced by the tarsands spill in Arkansas and the bombing in Boston, the militarized police force of the United States does not hesitate to use police-state policies to protect the corporations.  The training of Moccasins on the Ground is designed to instill discipline and a sense of responsibility in strategies for stopping the pipeline through the return of traditional values and decolonization.  The balance between speakers and hands-on training is what makes Moccasins on the Ground so effective.  As explained by several of the elders present, this is a spiritual movement based in the ancient Lakota tradition of relationships between human beings, plants, animals, water and rock.  In talking about a ceremony that closed the three-day training, Rocky Afraid of Hawk explained that:

“We are not allies.  We are relatives.  Allies may be together, but still apart.  In the Lakota way, relatives are with us.  The Hunka ceremony (the making of relatives) is not about individuals but about tiyospaye (the extended family).  This is the way we should think about what we are doing and how we should conduct ourselves to always be good relatives with each other and the water.”
Representatives of many Red Nations including the Nakota, Dakota, and Lakota peoples, Northern Cheyenne, Dine, Anishinabe, Cree, along with representatives from Protecting the Sacred, Tar Sands Blockade, Tar Sands Resistance Movement, Utah Tarsands Resistance, Lakota Media Project, Prairie Dust Films, Idle No More, and Colorado AIM, Barrio Warriors, and many other organizations, all participated in the event as well as the Hunka ceremony.