MNN. July 15, 2013. Railroads are needed for the New World Order regime. Troops will be brought in by rail to set up the fascist dictatorship for the bankers. These old boxcars  are like pressure cookers and might be used to take people to the FEMA death camps.
In 1881 the Corporation of Canada gave 22,500 kilometers of Indigenous land to the foreign bankers without our knowledge or consent. CP Rail then built railroads and sold the timber and resources. Troops and settlers were sent West. Our land was developed with tourist hotels, followed by steamships and airlines, all with our ever growing $340 trillion Indian Trust Fund.
The settlers need us to fight for our land and to save them. We can stand up to the banker bullies.  Like their rulers, they are not native to Great Turtle Island. Yet, in the Great Peace of Montreal 1701 we agreed to help them survive but never to own any land or resources.

Easy oil and gas are depleted. They want resources that are harder to find, nastier to extract, and more complicated to ship. US Montreal, Maine and Atlantic Railway was carrying “fracked” shale oil from North Dakota. The lethal cargo was being illegally passed through Kahnawake to Lac-Mégantic, as part of a boom in dirty, unconventional energy. On July 6 It blew up like an atom bomb incinerating almost 100 people.
Fracking of gas is creating earthquakes that reverberate around the globe. Fluids are put into the ground which cause pressure that forces the earth’s faults to slide easier.
A group of Canadian businessmen plan to build a 2,400-kilometre rail line and a pipe line to ship tar sands oil from Alberta to Alaska and elsewhere. They also plan to truck and barge it down our waterways.
Pipe dreams are visions resulting from taking drugs or day dreaming. The oil and rail bankers are dreaming about creating profits, becoming confused with reality.Lac-Mégantic was a perfect storm of greed, deregulation and a final energy rush for the bankers to gamble with the environment and human life.

The corporate governments of Canada and elsewhere freed them from environmental, labor and safety standards and oversight rules. Cost-cutting, massive lay-offs, and speed-ups followed. Then companies and rail-lines were privatized for greater profit.
Munitions of all types are being shipped in dangerous substandard old rail cars. Last year Montreal, Maine and Atlantic Railway got permission to operate with just one engineer.

Soon we will deal directly with the band and tribal council control grid, that is accelerating the genocide of our people. These fake corporate accomplices are THE only ones who will set up their own people for a fall.

We will end reliance on oil, not soon but now. For those who never knew the victims of Lac-Mégantic, there could be no better way to honor them.
The argument is about stopping the mad pursuit of infinite Indigenous resources. “Wrecking ball” corporations that are smashing up Mother Earth will be shackled. All transport of war materials by any means will be stopped. All resources will be directed into the Keshe/Tesla free energy technology. Oil will be left buried in the ground for all time as the Council of the Great Peace instructs. The people standing up to the madness will be the wrecking ball that Bruce Springsteen sings about: “Yeah, we know that come tomorrow, none of this will be here/So hold tight on your anger, don’t fall to your fears”. Wrecking Ball
Enbridge pipeline contaminates
MNN Mohawk Nation News kahentinetha2@yahoo.com Thahoketoteh@hotmail.com For more news, books, workshops, to donate and sign up for MNN newsletters, go towww.mohawknationnews.com  More stories at MNN Archives.  Address:  Box 991, Kahnawake [Quebec, Canada] J0L 1B0  For free download of Mohawk music thahoketoteh.ws
at July 16, 2013 No comments: 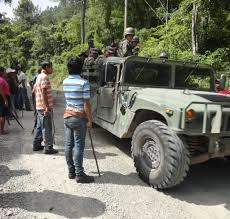 By Real World Radio
On Monday July 15th, while the Lenca community of Rio Blanco, in Honduras, marked 106 days of resistance to the building of Agua Zarca hydroelectric dam, the Army indiscriminately shot at the demonstrators killing one of the leaders of the resistance, Tomas Garcia, and seriously injuring his son.
Tomas was a Lenca indigenous leader who was part of his community’s Indigenous and Auxiliary Council and of the National Council of the Civic Council of Popular and Indigenous Organizations of Honduras (COPINH). Read more:
http://intercontinentalcry.org/honduran-army-kills-indigenous-leader-of-copinh-who-resisted-dam-in-rio-blanco/
at July 16, 2013 No comments: