MNN. July 19, 2013. Detroit is on stolen Rotino’shonni:onwe Indigenous land and is bankrupt. The rulers have no more use for this pile of polluted steel, glass and cement called a metropolis. Nothing can be sold without our consent at it is illegally built on our land. 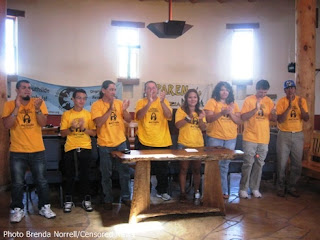 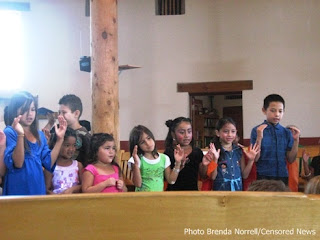 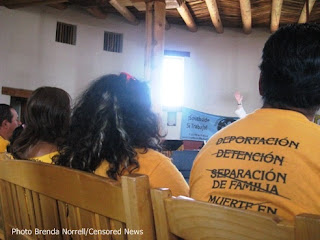 Speakers said that the act of fasting has amplified the message here of community members, carried by the media, and means that people are not suffering in silence. The fast has been keeping the struggle of resistance alive. 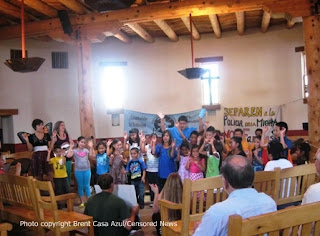 Those fasting said they came from Chiapas and Sonora in Mexico, and Honduras, and expressed gratitude for the support they received. While they were fasting, children and youth attended the School of Liberation, offering them the means to cope with the devastation of families, and to combat living lives of fear.

During the Saturday program at Southside, the children sang songs calling for a world without borders.

Immigration raids have left families separated, and children without parents, some of whom who have disappeared into the US foster care and adoption systems. At the same time, migrants, desperate for work, continue to die in the Sonoran desert of southern Arizona.

“We fast in solidarity with all of those who are facing deportation proceedings, all of those who have been separated from their families and all of those who have been ripped apart from their communities. We fast to say not one more deportation," said Eleazar Castellanos, a 46 year-old community leader at the Southside Worker Center and a fasting participant. The group’s spiritual fast is one of a series of travelling fasts that have been taking place nationwide. Communities in California, Oregon, New York and Florida have also participated in the national fast. The campaign is expected to end in Washington, D.C. during the last week of July, the campaign said.

The Not One More fast aims to have national and local impact. On a national level, the community members who will be fasting are calling on President Obama to immediately suspend deportations. They are also demanding Congress to pass an immigration reform that is inclusive of all 11 million undocumented people in the United States, and to stop the militarization of the US-Mexico border. On a local level, the Tucson community demands local law enforcement to stop collaborating with immigration law enforcement. Police and Border Patrol collaboration continues to divide families and terrorize communities in Tucson and across the country on a daily basis, the campaign said.