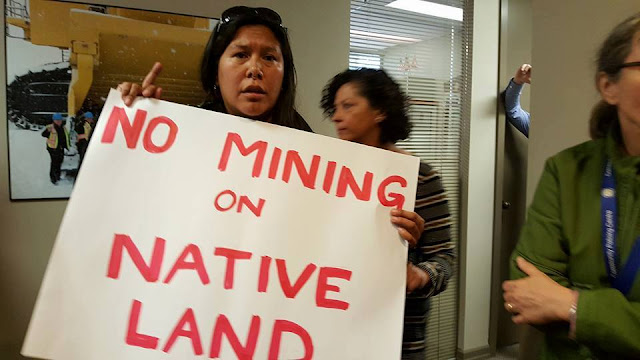 Click on arrow below to watch video
Video uploaded from Facebook
Exclusive video: Vancouver police violently break up the occupation of Imperial Metals HQ by Indigenous women and their supporters, who were marking the two-year anniversary of the Mount Polley mining disaster.

Two years after the Mount Polley disaster, Secwepemc Women's Warrior Society and Ancestral Pride had an action today to show Imperial Metals that we will escalate resistance until they cease and desist all mining operation in our Indigenous territories. Imperial Metals ordered thirty police offers to violently assault Indigenous women and supporters, with four arrests and many bruised bodies. But our spirits are high and we know the world is watching, we have support from around the world. We are holding their responsible for the violence against Indigenous lands and Indigenous women. We sent a message to investors and shareholders, including President Brian Kynoch who was in the office, that they are violating our Indigenous Rights and Title and violating our free, prior and informed consent.

According to Kanahus Manuel, "Vancouver is a hub for mining around the world. This industry is violating peoples and lands around the world and we join Indigenous peoples all over with our war cry to protect our homelands. Our actions will continue until Mount Polley and Imperial Metals are out of our territory. The Indigenous nations are united to get industry out of our territory."
. 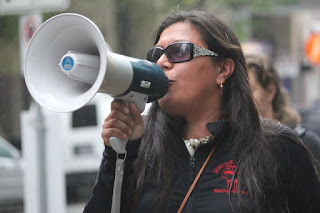 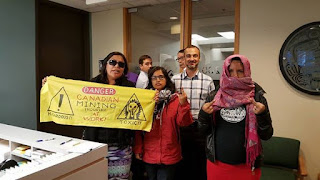 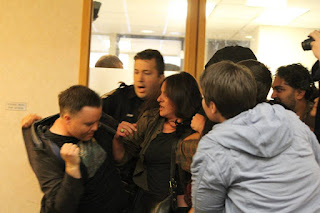 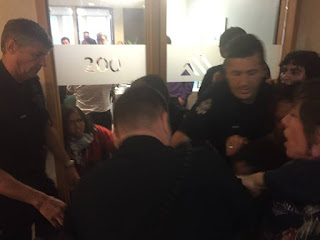 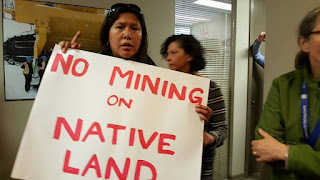 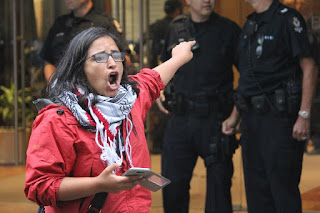 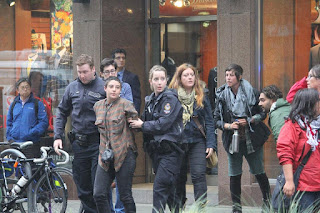 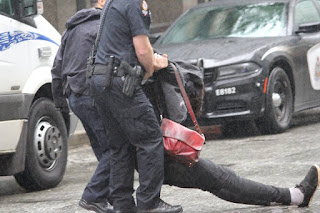 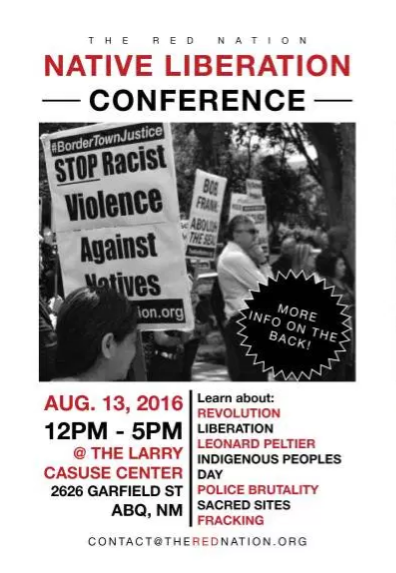 The Red Nation invites community members to its first ever conference. The conference will take place on Saturday, August 13, and be held at noon in the Larry Casuse Center (2626 Garfield AVE SE). During the conference, there will be various workshops and forums facilitated by members of The Red Nation based out of Gallup, Phoenix, Albuquerque, the Navajo Nation, and elsewhere. The primary aim of the conference is to orient, update, and educate the collective membership of The Red Nation and general public on local, regional, and international movements for Indigenous liberation. Some of the political struggles that will be discussed include clemency for Leonard Peltier, Indigenous Peoples Day, police violence, fracking in the Four Corners, and bordertown justice. The list of speakers, and their presentation topics, will be released on the conference’s Facebook event page and atTheRedNation.org website.

If you’re interested in The Red Nation, curious about movements for Indigenous peoples’ liberation, or just wanting to organize for political revolution, this conference will be an opportunity for you to connect, learn more, and get involved.

The conference is open to the public and participants of all ages. Food and beverages will also be provided. If you’re coming from out of town, we can provide limited accommodations. Please contact us ahead of time for lodging and/or to arrange accessibility services.

Following the workshops and forums, The Red Nation will host a Hozho Riot dance party at 7pm at Warehouse 508 (508 1st ST NW). Suggested donation is $3; no one will be turned away.
at August 09, 2016 No comments:

Read our latest report on Site C: Place of No Return

“Our people have a deep connection with this land because our ancestors told the stories and legends that are connected to that valley.” -- Chief Liz Logan, Treaty 8 Tribal Association, testifying before the environmental impact assessment of the proposed Site C hydroelectric dam.
The Peace River Valley in northeastern British Columbia is a unique ecosystem and one of the very few areas in the region that so far has been largely preserved from large-scale resource development. First Nations and Métis families and communities rely on the valley for hunting and fishing, gathering berries and sacred medicine, and holding ceremonies. Their ancestors are buried in this land.
The proposed $8 billion plus Site C hydroelectric dam would flood more than 80 km of the river valley, stretching west from Fort St. John. The severe impact on Indigenous peoples is beyond dispute. A joint federal-province environmental impact assessment concluded that the dam would “severely undermine” use of the land, would make fishing unsafe for at least a generation, and would submerge burial grounds and other crucial cultural and historical sites.