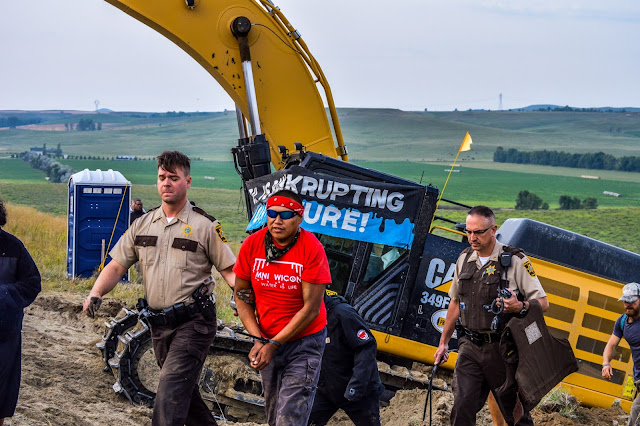 By Brenda Norrell
Censored News
The same corporation that bulldozed Native American burial places in North Dakota -- and attacked Native American women and children with vicious dogs and pepper spray -- is now bulldozing an ancient Indian site in Big Bend, Texas.
President Obama approved two pipelines to cross the border into Mexico, owned by the same company in Dallas that owns the Dakota Access Pipeline.
The corporation known as the “black snake pipeline,” Energy Transfer Partners, stole both the name of ‘Dakota’ for its northern pipeline, and stole the name ‘Comanche,’ for one of the pipelines now being constructed to flood Mexico with fracked gas.
In Dallas on Saturday, the American Indian Movement of Central Texas, and their allies, will protest Energy Transfer Partners, and its CEO Kelcy Warren.
In other censored News, Lakota Grandmother Olowan Sara Martinez, was extradited and released on bond for protecting the water of the Missouri River, where thousands of Native Americans are camped at the Standing Rock Sioux Nation.
The State of North Dakota is now charging the water protectors with felonies, and targeted the media and medics for arrest last week by riot police.
While the State of North Dakota charges water protectors and the media with crimes, North Dakota refuses to charge those who attacked women and children with vicious dogs and pepper spray. The online community found it easy to identify the dog handlers from the license plates at the scene, Frost Kennels in Ohio, and four former Bismarck police officers acting as security guards for Dakota Access Pipeline, during the attack on Sept. 3.
Amy Goodman, producer of Democracy Now, and Cody Hall, media spokesman for Red Warrior Camp, were charged with criminal trespass. Hall spent four days in jail.
In the north, the Onondaga 15 are in court and have filed suit against the New York State Troopers who attacked and beat them in 1997. The judge has forbidden them to speak to the media. Earlier, Ronald Jones said, “They broke my back that day.”
Even Censored News is now censored -- this time by Twitter. Twitter has blocked all links from the Censored News publisher. Twitter’s excuses vary. www.bsnorrell.blogspot.com
Read more:
Obama approved same company's pipelines to Mexico
http://bsnorrell.blogspot.com/2016/09/obama-approved-pipeline-now-destroying.html
Lakota grandmother and water protector jailed and extradited
http://bsnorrell.blogspot.com/2016/09/lakota-grandmother-water-protector.html
Onondaga 15 forbidden to speak to media
http://bsnorrell.blogspot.com/2016/09/onondaga-15-forbidden-to-speak-to-media.html
Standing Rock live streamers pointed out and arrested by riot police in North Dakota
http://bsnorrell.blogspot.com/2016/09/unicorn-riot-video-water-protectors.html
Dallas march against Energy Transfer Partners on Saturday, Sept. 24, 2016
http://bsnorrell.blogspot.com/2016/09/dallas-march-against-energy-transfer.html
Mercenaries and dog handlers identified in attack on Native Americans at Standing Rock
http://bsnorrell.blogspot.com/2016/09/torchlight-mercenaries-identified.html
Copyright Brenda Norrell
No portion of this article may be used without permission. No portion may be placed on a webpage that uses advertising or other revenue schemes.
brendanorrell@gmail.com