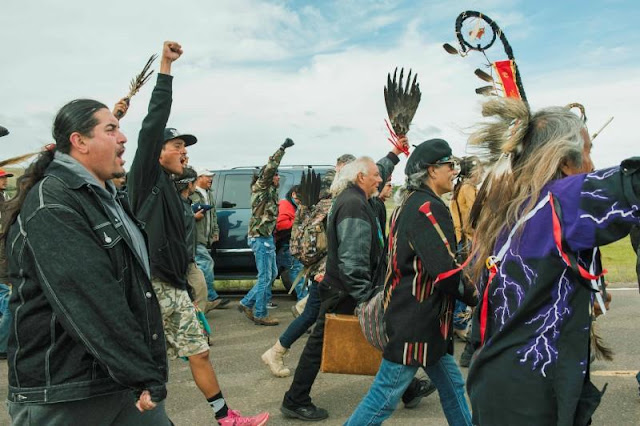 The same black snake corporation that bulldozed the burial place in North Dakota, and attacked women and children with vicious dogs and pepper spray at Standing Rock, is now bulldozing ancient Indian area in Big Bend, Texas
Following the rally, participants – mournful of the desecration of indigenous peoples’ sacred burial sites and the environment -- will embark on a silent, somber procession past the residence of ETP’s Chief Executive Office.IMPORTANT NOTE: As this is about a 30-minute MARCH, please, wear your most COMFORTABLE Walking Shoes!! Bring sunblock, water in refillable containerSATURDAY, SEPTEMBER 24, 2016
10:00 AM – 12:30 PM
PLACE:
8111 WESTCHESTER DRIVE, DALLAS, TX 75225
Note: The ETP used to be on Oak Lawn, but is ^ here now.
Come JOIN and MARCH with Us in DALLAS, TEXAS—PEACEFULLY DEMONSTRATE That WE STAND With OUR BROTHERS and SISTERS WHOSE WATER WOULD BE MADE TOXIC By a DAKOTA ACCESS PIPELINE (DAPL). SAY: “NO MORE PIPELINES—STOP DAPL!"
SHOW That You SUPPORT THE STANDING ROCK RESERVATION, the Hundreds of Thousands of People in North Dakota, and Others Who are STANDING UP AGAINST CONSTRUCTION OF THE DAKOTA ACCESS PIPELINE (DAPL).
THE American Indian Movement of Central Texas (AIMCTX), is bringing together people from many organizations IN A PEACEFUL MANNER, at the ENERGY TRANSFER PARTNERS (ETP) corporate headquarters, located in Dallas, Texas to march and to say: "Shut DAPL Down."
THIS Big Oil corporation, ENERGY TRANSFER PARTNERS (ETP), is Responsible for and is Overseeing the Attempted Construction of the Dakota Access Pipeline. THE DAPL IS PROJECTED To GO Through NORTH DAKOTA, SOUTH DAKOTA, IOWA, and ILLINOIS.
CONCERNED ONLY with Its Corporate Profits, ETP has No Regard for the Tens of Millions of People WHO WOULD BE NEGATIVELY AFFECTED by a Dakota Access Pipeline,
— NOT IF, But WHEN—IT WOULD FAIL.
STANDING ROCK SIOUX Tribal Chairman, DAVE ARCHAMBAULT II, has stated: “We have a right to our treaty lands, and we have a say. The company, the U.S. government, the state government never got permission from us to be on that land, to do this [destroy ancestral burial places and sacred sites] to our lands….They knew something was going to happen when they leapfrogged over 15 miles of undisturbed land to destroy our sacred sites. They knew that something was going to happen, so they were prepared. They hired a company that had guard dogs, and then they came in, and then they waited. And it was—by the time we saw what was going on, it was too late. Everything was destroyed. The fact is that they desecrated our ancestral gravesites. They just destroyed prayer sites. And it’s disturbing. And that’s why we’re filing for the temporary restraining order. They need to stop working. This company needs to go away. Energy [Transfer] Partners is a bad company.”
Note: ETP is similarly destroying a 5,000 year old Native Sacred site known as Trap Spring in West Texas’ Brewster County, near Big Bend National Park. A major part of the site is being irreparably damaged—despite being determined eligible as a State Archeological Landmark (SAL), the highest honor bestowed upon archeological sites in Texas. You can witness the site and its destruction, in much the same way that the Standing Rock Sioux's sacred burial grounds were callously bulldozed a week ago, here: https://www.periscope.tv/willkeller/1nAKEDZVXLZxL

ETP is using such tactics as Land Grab by EMINENT DOMAIN—and, as importantly, is ROUTING DAPL BENEATH The MISSOURI RIVER, before it becomes the MISSISSIPPI RIVER. Plans for the Trans Pecos Pipeline seem to be following the blueprint of the DAPL.

WHO and WHAT:
American Indian Movement of Central Texas (AIMCTX) Members and supporters in Dallas Texas with Allies Will Gather IN A PEACEFUL MANNER and March against "Energy Transfer Partners.
Posted by Censored News, publisher Brenda Norrell at September 23, 2016

May God Bless every step you take in this protest. I live in South West England and know that your protest is protecting our planet, our Earth Gsrden and I'm humbled by your courage in the face of unmeasurable opposition. I'm a widow grandmother and have little money, if I had more I would send it to the legal fund. All I can do is pray. May God protect you all,