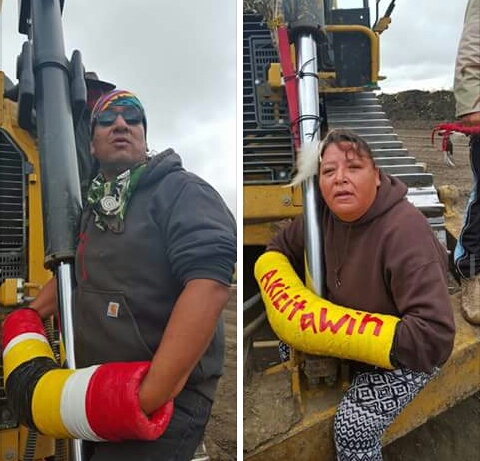 Cannon Ball River, 1851 Ft Laramie Treaty Territory…Today, in a unified effort, the water protectors of the resistance camps near the confluence of the Cannon Ball and Missouri Rivers have stopped Dakota Access Pipeline construction.
Although a temporary restraining order hearing to stop construction was scheduled for late afternoon, Dakota Access workers traveled to work sites this morning.  They were met by over 200 water protectors who quickly surrounded two bulldozers.  The construction workers were allowed to leave the machines and left the work site unharmed.
In this nonviolent direction action, two water protectors used "lock boxes" to attach themselves to the bulldozers and begin a five hour protest to prevent construction.
Green Party Presidential Candidate Dr. Jill Stein and running mate Ajamu Baraka visited the site and participated in the direct action.  Stein spoke passionately about the need to stop the construction of the Dakota Access pipeline.
"I came here to support the Standing Rock Sioux and the actions here.  I am here to support the protection of the Standing Rock water supply, the water that nourishes millions of people, and the sacred sites and the ancestral lands of the indigenous people." Stated Stein.
The water protectors maintained control of the work site until late in the day as they awaited the ruling on a temporary restraining order filed Saturday to halt construction.
U.S. District Judge James Boasberg ruled that work can continue west of ND Highway 1806, including the location where significant cultural and burial sites were unearthed. He believes the U.S. Army Corps of Engineers lacks jurisdiction on private land and ruled that work will temporarily stop on Army Corps land between Highway 1806 and 20 miles east of Lake Oahe.
In reality, the Army Corps was the federal agency that issued the permit for the construction of the pipeline. Water Protectors hold the Army Corps accountable for the destruction of the significant sites that their contracted archaeologists overlooked during the early stages of the permitting process.
Morton County Sheriff deputies and North Dakota State Troopers were present at the protest site for a short time. They made no attempts to disperse the Water Protectors.  Dakota Access's contracted private security workers maintained posts on the east and west sides of the work site and did not unleash their attack dogs on water protectors today.
F.B.I. Supervisory Senior Resident Agent Jake O'Connell was also at the protest site. O'Connell stated that although he was called due to a report of armed protestors, he was unable to locate anyone with a weapon.  He also stated that the FBI will not be investigating Saturday's incident that involved Dakota Access's use of private security guards siccing attack dogs on unarmed Water Protectors at the construction site where workers willfully destroyed significant cultural findings.
Morton County Sheriff Kyle Kirchmeier was unavailable for comment during the action, but later held a press conference and noted that Water Protectors were masked and wore goggles.
On reports of the civil disobedience and vandalism, Kirchmeier stated, "We are actively investigating these incidents by reviewing videos and social media sites to identify people."
In response to the vandalism claims, a Lakota warrior responded to the claims saying, "Spray painting bulldozers is nothing compared to the vandalism committed by Energy Transfer Partners digging up Unci Maka (Mother Earth), and burial and sacred sites."
Water protectors and land defenders from all around the world continue to make their way to the resistance camp to support the Standing Rock Sioux Tribe in their case to protect the water supply for millions of people.
We remain committed to nonviolent direct action to protect the water and sacred sites.
at September 07, 2016