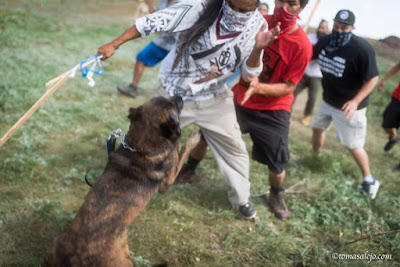 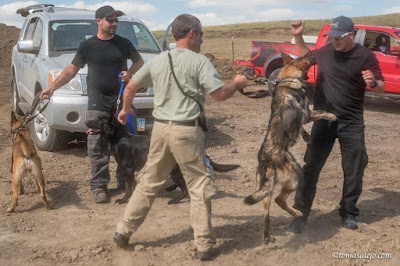 Attack dog attacking one of its own handlers on Saturday.

CANNON BALL, North Dakota -- Kandi Mossett, Mandan, Hidatsa and Arikara, spoke on Standing Rock Spirit Resistance Radio on Sunday morning. Kandi said a major burial place was dug into by the bulldozers yesterday. She said the pipeline company rushed in and destroyed this major burial place once it was identified, before state agencies could protect it.
Today, there will be a prayer walk for the ancestors in camp.
Kandi said this major burial place was likely her people, Arikara.
There are 300 burial places and sacred places in this area. It was the private land owner that reached out to the Standing Rock Sioux Tribe on Friday to protect this site.
"The site is desecrated."
"What they did yesterday was remove topsoil." The pipeline plans to dig deeper.
Speaking of the large machinery, earth movers, rushing in on Saturday, she said, "They destroyed a sacred site before we could stop them." The goal is the same as Keystone XL: "Shut it down."
The fossil fuel industry is creating choas. "We have alternative solutions," she said of solar and wind energy, pointing out that Native American ancestors did not have pipelines.
Kandi said President Obama has been disappointing in regards to his promises, and one thing he could do now, for his legacy, is to set free Leonard Peltier and grant clemency.
Obama has not responded to cries for help to halt the pipeline and protect the burial places and the Missouri River.
Kandi is Mandan, Hidatsa and Arikara, Three Affiliated Tribes. Their land, air, water and people have been devastated by oil and gas drilling, fracking, and camps of widespread crime of oilfield workers. She said the flaring of gas is poisoning the people and radiation is being released from drilling deep into the earth.
In Iowa, people are now fighting eminent domain seizing their land for Dakota Access Pipeline.
Kandi points out Dakota Access Pipeline received permits in segments to avoid obtaining a full environmental impact statement. Live radio Standing Rock Spirit Resistance Radio   http://70.36.233.184:8777/gov
Click arrow below to listen.

Obama is behind this , why would he stop it when he visited Bismark a year ago to set this whole thing up !