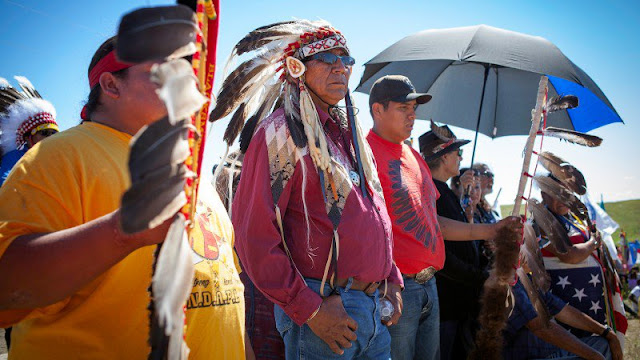 "They are putting our lives in jeopardy." Cody Hall.

Good to see all the relatives are going on a walk to town. Tell your own story! You water protectors are Great & Proud people. You are the heart, soul, spirit,love, strength. Take Courage ! I wouldn't pay any attention to those lying racist jerks that said that they have to call out the guard cuz of a blocked parking space ! People all over the world love you, support you, they may even want to be you ! You are the real American heroes, Turtle Island people heroes/ protectors! When you go on that walk will you remember me and the ones who wish we could be there too? The water protectors are Inspiring people to feel that there is Life and Hope & We will Stay Standing Strong with Respect.

We need beacons all over the world. A world revolution

I'm an English Grandmother, I live in South Somerset, England. My daughter lives in Seattle and told me about the plight at Standing Rock and that no major news in USA or UK, was covering the injustices and rape of the American Indians land and the Environment. If I had money I would fly to USA and give these courageous people my last breath. All I can do is pray and sign my heart and soul to Unity, Solidarity and Peace with the Native Americans. May God protect and bless them and your newspaper.

Thank You Mrs Hearn. Got back last week and the SRS were so appreciative of every one's help. People from all walks of life were there living in perfect harmony. Drones, planes and helicopters overflew us all day and night, while daily life on the ground bustled with activity. Have never seen such peace, harmony, respect, and genuine gratitude. No one left a stranger. No one left unmoved.

Directions to get to camp need

I can not be there in person but I support you guys from the UK.. Good luck I am routing for you all.. Gemma Marshall From Hyde Manchester England

What airport would I fly into? What supplies should I bring?

It is between mandan and cannonball on 1806 just a little bit out of cannonball.

I'm in support of Standing Rock! I pray for you everyday. I want to get you supplies and help. But have no way to get them to you. Peace and love.