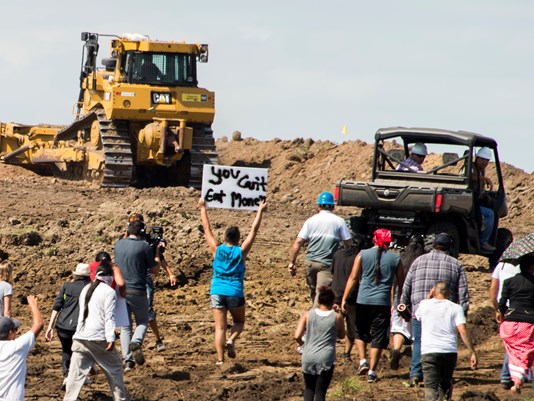 By Wasté Win Young
Censored NewsRegarding the Cannonball Ranch: In 2006, Bill Edwards tried to auction off all 7,400 tracts.The Standing Rock Sioux Tribe legitimately looked at buying it but didn’t have the $5 million asking price.Dave and Brenda Meyer bought 10 parcels equaling 2,365 acres of the Cannonball Ranch in 2013 for $3.2 million dollars. This includes the 429 acres of United States Army Corps property under easement to the Cannonball Ranch.The Meyers signed an easement with the Dakota Access Pipeline (DAPL) which would have allowed the pipeline to cross their land.Recently, the Meyers had allowed Standing Rock Sioux Tribal members to survey (area where dog attacks occurred) and identify historic properties significant to the Očeti Śakowin. When Energy Transfer Partners/DAPL found out that the Meyers had allowed tribal members on site they initiated a lawsuit against the Meyers -- worth millions.When the news broke that Meyers sold the Cannonball Ranch to DAPL for $100.00 it was no surprise to me -- because I know the back story. It IS disappointing, but not unexpected.Energy Transfer, Dakota Access Pipeline, the Army Corps of Engineers are bullies.The Očeti Šakowin Camp and Red Warrior Camps are on treaty land guaranteed to us by the 1851 and 1868 Fort Laramie Treaties. Land that was never ceded. Land, the United States took for the building of dams all along the Missouri River under the Pick-Sloan Act. Land that is referred to as "Taken Land."Today, the United States Army Corps of Engineers has jurisdiction on the land we are on. Regardless of who thinks they "own" the land, including easements, right-of-ways, transfers of ownership -- the original land owners WERE, ARE and ALWAYS WILL BE the Očeti Šakowin.
at September 26, 2016

Get it over turned & voided due to signing under dieresis !