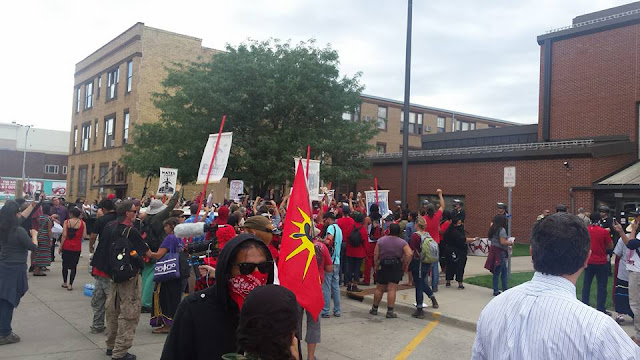 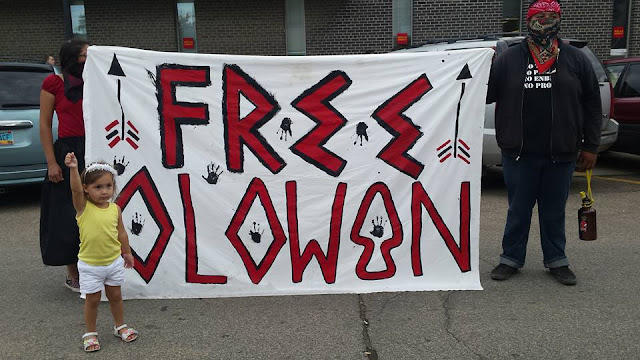 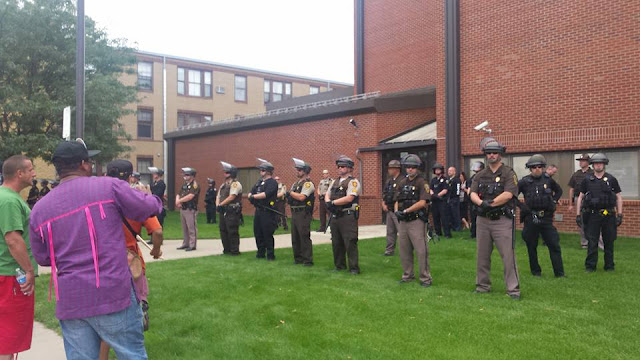 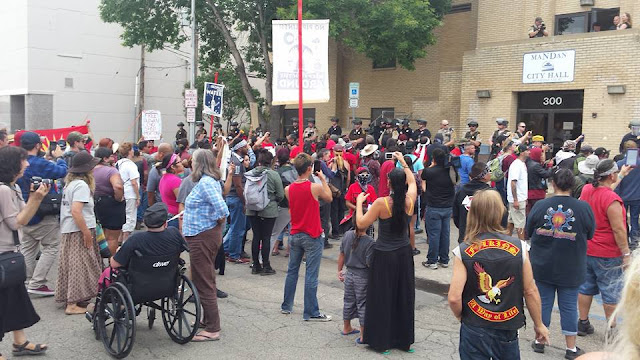 Photos Today: Free Olowan! gathering happening today September 20th outside Morton County Corrections Facility and City Hall Building in Mandan, North Dakota. She has been incarcerated since September 13 and the direct action to stop construction of the Dakota Access Pipeline for that day. We love you Olowan!

While incarcerated in Morton Country Jail, Olowan Sara Martinez wrote this message yesterday. Sara Long, who was jailed with her until yesterday, shared Olowan's message from jail. Sara was charged while live video streaming the Dakota Access Pipeline destruction, see link below.

"Anpetu waste' beautiful resistors, Olowan Miye.. I would like to share with you my Innerstanding of what is happening around me..

"I must start by acknowledging my love for my ancestors, my children, and of course for Mni Sose. I also pray my words reach you in good strong health and spirits..
"As I sit here in Morton County Jail I can see clearly that us sacred water protectors are the least of their problems..
"thru the tears stories and friendship shared with me by the beautiful women of the surrounding communities I know I was meant to be here and for that I have no regrets..
"the heartache of a life tormented by abuse of mind body & spirit, the grief of love lost, death and abuse, and the anger of feeling helpless and hopeless is limitless to creed or color..
"I have also come to Innerstand that the threat to poison the Mni Sose aka the Missouri River is felt by all..
"Altho the sacredness of our first medicine must always be stressed it is always Innerstood by those who choose to listen, and many are listening to Mitakuyapi, my relatives..
"I encourage all to keep up the battle to save sacred water thru all tactics being used.. DO NOT GIVE UP!
"To the surrounding communities of Morton County, open your eyes, us sacred water protectors are thinking of your grandchildren's grandchildren whether you want to believe it or not..
"We are not getting paid to be here! Everything for everyone, nothing for ourselves.
#DeathtoMeth! #DeathtoDAPL! #AlcoholIsTheEnemy!
"Hecetuye
"Olowan Sara
"Liilii Red"

The rally for her release said, "Olowan is currently incarcerated at Morton County jail for her defense of the Water at a #NoDAPL action to stop the continued construction of the Dakota Access Pipeline. The state is pushing for her extradition on charges connected with her resistance at Whiteclay, Nebraska (to stop alcohol sales from destroying her community) and is attempting to hold her for weeks without proper representation and process."

Olowan is an Oglala Lakota Mother and Grandmother. She is a long time Indigenous Land Defender, Water Protector, a born and raised Warrior. Her roots in resistance run deep and strong, far and wide, from Liberation Days to the Sounds of Resistance, she has worked to bring together the Women’s Peace March, to organize with Mothers Against Meth, to protect Indigenous women from industrial man camps and to stand in the way of resource extractive industry time and time again. Olowan is not only an Indigenous Land Defender and Water Protector, she is also working to actively protect her community from the oppressions tied to drugs and alcohol.

Olowan is a Sundancer, a Pipe Carrier, she is a spiritual woman, a mother to the movement, a teacher, a matriarch and a mentor to the youth. Her war cry has brought so many to these frontlines and many others. We don’t leave our Warriors behind and we will not let Olowan become another missing and murdered Indigenous woman, kidnapped by the state, we will not let her become another statistic, Indigenous women are the largest and fastest growing prison population.

Unicorn Riot statement and video of its arrest, and the arrest of Sara Long.
http://www.unicornriot.ninja/?p=9147

America is 5% of the world's population and has more people locked up than all others countries!
Maybe 2.4 million Americans in prison working for pennies a day for private companies, in private prisons who get more money when they get more prisoners. Like in ND, you get a longer sentence.
Excessive Charges,Excessive Penalties, Excessive Sentencing, Injustice for the poor, Racism.
But, the courts let some criminals off.

Mass Incarceration in America.
12 Million Americans per year churn thru arrests & jail!
So many people who can't post bond or bail out because they are poor, or not rich. In jail, no conviction, serving time.
Another 4,752,000 or more on probation or parole. And 6 million Americans who are not allowed to VOTE due to a felony conviction.

Are the American people so much more worse than the people in other countries ?
America is spending about as much money to lock up its own citizens as on wars in other countries! I thought America was supposed to be a great nation. Maybe its just for profit prisons & oil & mineral companies who want to take America's natural resources; dirty deals done cheap ?

Lots of police at Morton County courthouse against a Peaceful assembly. Where are they when women are being taken to the ND oil & gas drilling mancamps?
Where is the police concern when women & girls & boys are drugged, assaulted, beaten, raped, tortured, many times over & over again. Seems like when somebody, when Olowan stands up to expose the disease(s) the police (who tells the police: prosecutors, politicians,private companies) to go after Olowan. That's why the system keeps the hate going against Native Americans. Its sick how much Racism there is towards indigenous people. And denial of that racism.
Its all a double mind twisted sick lie. The ND police should be out at those camps arresting the rapists. There's alto of white women there too; All the police are white, but their bosses won't let them save their women. Instead the abused are condemned and abandoned. That's why people are Standing Up together against all this horrible sickness.
Which side are you on ?