Burial places remain in the path of DAPL bulldozers

Standing Rock Chairman David Archambault said, "Today's denial of a temporary restraining order against Dakota Access Pipeline west of Lake Oahe puts my people's sacred places at further risk of ruin and desecration.We are disappointed that the U.S. District Court's decision does not prevent DAPL from destroying our sacred sites as we await a ruling on our original motion to stop construction of the pipeline." 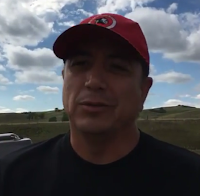 CANNON BALL, North Dakota -- Standing Rock Chairman Dave Archambault said he is disappointed that a federal judge in Washington failed to protect burial places today.
"We're disappointed at the decision," Chairman Archambault said after a federal judge failed to grant a temporary restraining order where burial places and sacred places have been identified.
"We know there are sacred sites."
Chairman Archambault said the federal judge's ruling puts the burial places and sacred places at risk of more destruction by Dakota Access Pipeline.
The court documents reveal that the area bulldozed, and now vulnerable to more destruction, was one of the most significant discoveries in North Dakota in years.
The site holds an "extraordinary concentration of graves, including burials of important chiefs" directly in and adjacent to the pipeline's route.
Red Warrior Camp said, "There was absolutely no victory in the courtroom today. The judge stopped construction on the east side of the Missouri River for 20 miles. "Well, we have never even had any actions on the east side of the Missouri, and all that east of the Missouri construction is mostly done."
"The judge allowed DAPL to continue construction where we are at, destroying sacred sites west of 1806 as of today. That is why water protectors went there to shut down construction. We honor them. It's very simple."
"There are people who want to witness history, not really caring if the pipeline is built. Then there is this whole other movement of people who traveled thousands of miles to actually make history, by stopping this pipeline by any non-violent means necessary."
"Why did we come here? The water called us together. Now, the damage they've done to the sacred sites cannot be undone."
"Stay unarmed and non-violent, but let's stay together and stop this pipeline!" Red Warrior Camp said.
AP reports, "U.S. District Judge James Boasberg said Tuesday that work will temporarily stop between State Highway 1806 and 20 miles east of Lake Oahe, but that work will continue west of the highway because he believes the U.S. Army Corps of Engineers lacks jurisdiction on private land."
On Saturday, Dakota Access Pipeline bulldozers tore into the earth of a major sacred site where cultural items and burials are located on the west side of Lake Oahe, which Judge Boasberg refused to protect today.
Judge Boasberg, it turns out, is also a judge on the Foreign Intelligence Surveillance Court.
Native Americans protecting the burial place were attacked by Dakota Access Pipeline security and attack dogs on Saturday. Six people, defending burial places were bitten by vicious dogs, dozens were pepper sprayed, and some were assaulted by DAPL private security and construction workers.
Afterwards, the Morton Co. Sheriff's Office released a statement of false accusations, accusing the protectors of violence. In doing so, the Sheriff's office exposed the corruption in law enforcement in North Dakota, which is protecting the energy industry, and facilitating the destruction of Mother Earth, in violation of the ethics of their offices.
Chairman Archambault said today that the pipeline company provoked the water protectors on Saturday.
Mainstream media, who have refused to be present to cover the news, published and broadcast the lies of the Morton Co. Sheriff's office on Saturday.
Once again, the victims were victimized first by law enforcement and, then by the media which refuses to be present and ascertain the facts.
. Read more on today's court decision and watch video below:
http://www.keloland.com/news/article/news/the-latest-judge-grants-short-work-stop-on-4-state-pipeline
at September 07, 2016

Direct violation of Federal law. There have been too many bad judge appointments during the Reagan-Bush years.

This is an egregious lack of concern and conscience on the part of this judge, and by extension those members of Congress who are only too happy to be abusive in its treatment of Indigenous Americans.
The judge is simply showing the profound disconnect with any notion of empathy, and marks a severance from everything Christianity is supposed to stand for.
As Baha'u'llah pointed out clearly and emphatically: "Power has been seized from two classes of people: the Kings and the Ecclesiastics..."
In other words, the latter group(religious leaders and the Institution of Religion) will no longer have the ability to edify the hearts and minds of people as they once did.

And the judge proves this.