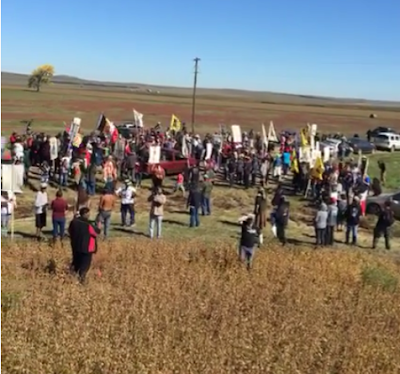 Standing Rock water protectors moved in mass today, by the hundreds, and halted construction at multiple sites of Dakota Access Pipeline, where work was supposed to be halted.
'The roads were blocked -- the eagle guided us," said one of the Lakota women, among hundreds who rushed to the sites to halt construction today.
Pipeline workers fled as water protectors arrived. Police arrived in riot gear with a sound canon, acoustic weapon, which has not been used as of now.
"We are going to come back every day until we shut this pipeline down," said one of the Lakota men protecting the land, water and air for future generations.
"As long as they're not working -- we're winning my Relatives," he said, with thanks to the Horse Nation for being here, on Treaty land.

Red Warrior Camp said, "Today, a 60+ vehicle caravan traveled to 3 Sacred Sites that are being threatened by the Dakota Access Pipeline, starting with the Sacred Ground Camp (where ancestral sites were desecrated and private security unleashed their dogs on unarmed protectors). The caravan then traveled and conducted ceremonies at 2 other DAPL construction sites. Water Protectors, Indigenous Peoples and allies united today to stop construction of the Dakota Access Pipeline. The actions today were led by ceremony."

Despite the accusations by the police that there "were shots fired" at today's ceremonies and actions, we stand united that this was a peaceful act of prayer for our Water and our Lands, Red Warrior Camp. 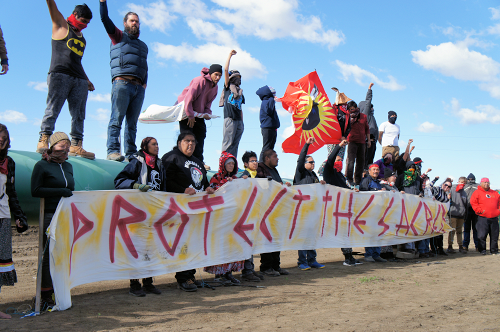 
The two day event will take place at the State Capitol on October 6, 2016 and The Bureau of Indian Affairs Regional Office on October 7, 2016. Members of Stop Tribal Genocide and fellow protestors will meet up at the State Capitol and speak about topics pertaining to: Tribal Disenrollment, Pipelines, Fracking, Federal Recognition and Honoring of Treaties, Police Brutality, Abolishing Columbus Day, Annexing Native American Mascots and the Identity Theft of Native American Children. The first day will culminate with a March around the Capitol building. Stop Tribal Genocide will end the protest on Friday, October 7, at the Regional Office of The Bureau of Indian Affairs, where they will protest their grievances to the Bureau and hopefully place a list of grievances in the hands of the head of the Regional Office herself.


As Founder of Stop Tribal Genocide and a Co-Coordinator for the event, Emilio Reyes, Gabrielino, says that "preserving the existence of our Tribes is our top priority and we are uniting to fight against all issues in Indian Country."


This event occurs during a time in America where Civil Rights violations have been taking place all over the country. These violations have caused quite a controversy and have started to unify the general public in their fight to preserve their rights. Standing Rock, North Dakota is a prime example of Native Americans, as well as people from all walks of life, banding together to stop a pipeline that can potentially harm a massive body of water that provides drinking water for thousands of people nationwide. The Native Rights Matter March is the West Coast version of that protest.


"We want to stand together peacefully and fight for our rights and our ways of life. We are still here and will let the world know that we speak as one voice; stand as one people; and will march as one to protect our civil liberties, our land, our water, and our livelihood," says Yulu Ewis, a member of The Federated Indians of Graton Rancheria (Coast Miwok), Co-Founder of Stop Tribal Genocide and a coordinator of this event.


Our Native American speaker list for Thursday, October 6, is as follows: