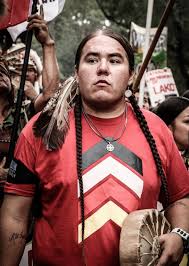 Morton County violated civil rights of activist: A bogus warrant and a night in jail

MANDAN, North Dakota -- Greg Grey Cloud, Lakota, is free after spending a night in Morton County Jail, when a misdemeanor warrant was suddenly changed to a warrant with no bond. The State of North Dakota and Morton County violated his civil rights.
Greg was charged with criminal trespass for Sept. 3 (the day that the dogs attacked the water protectors.) The bogus warrant was not issued until Sept. 15.
Greg said he was not present on Sept. 3. He turned himself in, in order to clear the matter up with the court. When he arrived, he was told there was no bond on this warrant and he was forced to spend the night in jail.
The charge is a misdemeanor.
Then, the Morton County Jail left Greg in a small, cold interview room until 4 a.m., after an interview with an attorney.
Today, the charge was dropped against Greg, but with the threat by the court that it could be refiled.
Greg spent the night in jail, where twenty-one water protectors were jailed, after being arrested on Wednesday by police who burst on the scene with shotguns and assault rifles loaded, and armored vehicles.
Native American women, children and elderly, and allies, were in prayer for the water and protection of the burial places, at a work site of Dakota Access Pipeline.
Although the media has misled the public into believing that DAPL halted worked on the pipeline, DAPL has instead continued work at an accelerated speed, ignoring an order of the court to halt.
A court order from the DC Court of Appeals issued on September 16, 2016 states that DAPL is to stop all construction in a 20 mile buffer on both sides of the Missouri River.
The State of North Dakota, and Morton County Sheriff's Office, have refused to enforce the federal court order to halt construction.
Greg is an advocate for missing and murdered women. Please share your support with him. 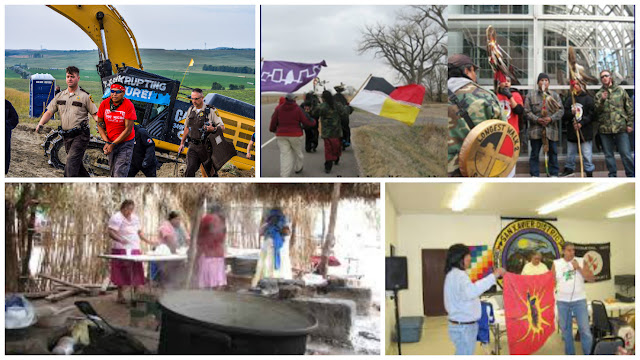 Celebrating our 10th Year Anniversary
Today, on our 10th Anniversary, Censored News had one million readers!

We are celebrating the 10th Anniversary of Censored News today, Sept. 29, 2016. What makes me happy is that we have, in the words of Martin Luther King, overcome. We have overcome the censorship and oppression, and the lies and manipulations, of the media, corporate monsters, and sinister politicians. We are still here. We are still publishing with no advertising, grants, or revenues. Today our readers have multiplied, and today we passed the 9 million mark in pageviews.

Ten years ago, I was a staff writer for Indian Country Today, where I had worked for most of the years since 1995. On that day, after being censored repeatedly, I was terminated. The editor had warned me, in writing, that if I did not stop writing about grassroots Native people, that I would be fired. On that day, I was on my way to the Indigenous Peoples Border Summit in San Xavier, on Tohono O'odham land.

With no place to post my articles, Censored News was born.

Indian Country Today editors censored some of the greatest and most powerful voices in Indian country. This happened after the newspaper was sold by Tim Giago, Lakota, to the Oneida Nation in New York in the late 1990s.

An interview with Buffy Sainte Marie was censored for seven years, which detailed how President Lyndon Johnson blacklisted her out of the music industry in the U.S., because of her stance against the Vietnam War and her song, "Universal Solider." When the article was published, Indian Country Today continued to censor the facts about uranium mining on Lakota land at Pine Ridge.

When Louise Benally, Dineh of Big Mountain was censored, she spoke out against the invasion of Iraq as it began, comparing it to the horror and tragedy of the Long Walk of Dineh. She spoke out at a time when few would speak out against America's bogus wars and the lies behind those wars. (See Censored article below.)

Being censored always leads to personal hardship, even devastation, as detailed in the lives of those who survived McCarthyism. Censorship can also open doors unimaginable. Both were the case for me.

After being censored and terminated by Indian Country Today in 2006, the other newspapers I had worked for since 1982 also refused to hire me. With time on my hands, I was able to travel the West, and even to Mexico and Bolivia, to share censored voices, always scraping up just enough money to make it happen.

During the past 10 years, thanks to Govinda at Earthcycles, Censored News was able to broadcast live and preserve audios of some of the great Native Americans of our time. We began our broadcast at the Indigenous Peoples Border Summit ten years ago. We broadcast for five months live on the Longest Walk northern route across America in 2008. Then, we were live at Western Shoshone, Acoma and Laguna Pueblos, Havasupai, Mandan, Hidatsa and Arikara, and AIM West. We also broadcast from the Mother Earth Conference in Bolivia, and the Peltier Tribunal and Boarding School Tribunal in Green Bay, Wisconsin.

It is, however, the collective that Censored News represents today that is its greatest honor, its greatest offering. Today Censored News is a gathering of the good hearts. It is a collective of the writers, photographers, translators and activists -- who often pay out of their own pockets and share freely -- so the world will know the truth.

Today, Censored News belongs to all of them, and all of you, the good hearts who are resisting.

Thank you for this opportunity to celebrate.

The following comments by Louise Benally of Big Mountain, comparing the Long Walk and imprisonment in Bosque Redondo to the war in Iraq, were censored by Indian Country Today. Pressed to publish a correction to the published article by this reporter, the newspaper refused.

Navajos at Big Mountain resisting forced relocation view the 19th Century prison camp of Bosque Redondo and the war in Iraq as a continuum of U.S. government sponsored terror.

Louise Benally of Big Mountain remembered her great-grandfather and
other Navajos driven from their beloved homeland by the U.S. Army on
foot for hundreds of miles while witnessing the murder, rape and
starvation of their family and friends.

“I think these poor children had gone through so much, but, yet they
had the will to go on and live their lives. If it weren’t for that, we
wouldn’t be here today.

“It makes me feel very sad and I apply this to the situation in Iraq.
I wonder how the Native Americans in the combat zone feel about killing
innocent lives.”

About Censored News
Brenda Norrell has been a news reporter in Indian country for 34 years. She began as a news reporter at the Navajo Times, during the 18 years that she lived on the Navajo Nation, living for years in a log cabin in the Chuska Mountains. During those years, she was a stringer for AP for five years, covering the Navajo Nation and federal courts, and USA Today for seven years, covering the Navajo Nation. As a staff writer for Indian Country Today, she covered the Southwest. After being censored and terminated by Indian Country Today, she created Censored News, now concluding its 10th year with more than 9 million pageviews.

By Mohawk Nation News
MNN. Sept. 29, 2016. Judge Frederick Scullin [Bones] of the New York Federal Court tried to throw out so far 8 of the “Onondaga15” pro se plaintiffs/victims of the I-81 NYS INDIAN Detail attack on May 18, 1997. Five were a few minutes late because the guards kept them outside the courtroom. After argument they were reinstated.
Scullin does not allow evidence like a video showing women, children and elders standing around the ceremonial fire on the Jones property and being viciously attacked and arrested. Any evidence contrary to the interests of the NYS I-81 INDIAN Detail, especially their contradictory statements are being kept out. One was not allowed to cross-examine the cop in case of false arrest.

‘Henh! We told you to stop resisting police brutality!’
Scullin ordered the plaintiff to give him his questions to decide if they can be asked by someone else. The plaintiff insisted on asking them himself, which by law he’s allowed to. The fix is in!

NYS ‘royalty’: “You tell ’em, judge!!”
Scullin glanced for a second at the questions and then denied all questions, without explanation. An argument ensued. Scullin ordered him out of the courtroom. The plaintiff asked, “What does that mean?” Scullin demanded the plaintiff leave. The man asked, “What does that mean?” Scullin did not answer. The man asked, “Judge, can you clarify what you mean? Are you throwing me out of the case?”
Scullin yelled, “I want you out of my courtroom for the rest of the day!”
The plaintiff said, “I don’t believe you have ever experienced a case like this. Throw me out of the case so I can start my appeal!” Scullin wouldn’t.
Scullin ordered the jury out so they could not see his continued abuse. The plaintiff’s loud voice could be heard through the walls.

Freddie Scullin [Bones]: “You can appeal my disgusting rulings”.
Two plaintiffs left the courtroom with the boisterous man to protect him. During the chaos, one guard at the door pushed the plaintiff in the back. The plaintiff asked, “What are you doing?” One guard said, “At least I’m not a savage”, No, he’s a racist! Fifteen cops arrived as a show of force and escorted the three of the “Onondagas 15” out of the courthouse. Shuddering Scullin ran to his chamber where he could have a good cry.
It appears the court is trying to sabotage the case, hoping the jury will give a decision that supports the Troopers for their crimes.
One woman supporter walked out shaking her fist at the judge, “I’m a warrior!”
The INDIAN Detail that viciously beat the plaintiffs on May 18, 1997 sit and watch. The warriors were falsely accused of being at the gathering and putting the women and children on the front lines and running away!
Scullin continues to try to derail the pro se plaintiffs’ case. [Stand with the Onondaga15, 100 South Clinton in Syracuse]. thahoketoteh.
As the Onondaga15 are being railroaded by Judge Scullin [Bones], we are reminded of the Grateful Dead song “Casey Jones”: “Driving that train, high on cocaine. Casey Jones, you better watch your speed. Trouble ahead, trouble behind, and you know that notion just crossed my mind.”