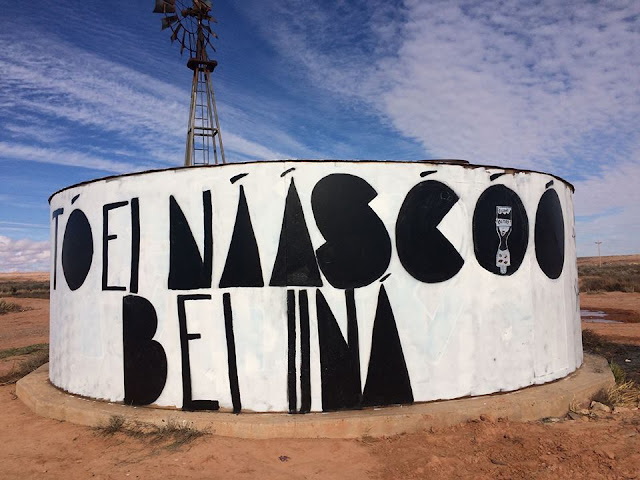 Indigenous Youth for Cultural Survival
Contact: Selest Manning
slmanning4@gmail.com
Censored News
FLAGSTAFF, Arizona -- In solidarity with the ongoing fight against the Dakota Access pipeline,  Indigenous Youth 4 Cultural Survival have organized a  rally  in solidarity with the land protectors in Standing Rock, Red Warrior, and Sacred Stone Spirit Camps Tuesday September 6, at 5 pm. At 6 pm during the Council meeting public comment period and following the rally outside of City Council, Indigenous Youth 4 Cultural Survival will request City Council add a discussion about of the pipeline to a future agenda.
The rally will feature prominent community members speaking out on the importance of protecting indigenous land, rights and safety of indigenous communities and protection of waterways.
The intention of the rally is to unite the Flagstaff indigenous and non-indigenous community  in (solidarity) with Sioux communities. After the rally, Indigenous Youth for Cultural Survival will be formally requesting City Council to add a discussion about the Dakota Access Pipeline to a future Council agenda.
The purpose of having this added to a future agenda is to provide our community with an opportunity to discuss the issue and propose a resolution in support of our sister community fighting to protect indigenous rights/lands. Council members are mandated to represent and address the interests and concerns of our community. In this case, it is clear that Flagstaff would like to participate in the national dialogue about this issue.
For the past several months, Indigenous and non-indigenous communities have been rallying against the construction of the Dakota Access pipeline (also referred to as the Bakken pipeline). If constructed, this pipeline will transport 450,000 barrels of oil per day from North Dakota to Illinois and will pose a serious threat to sacred land and ways of life. If built, the chances of the pipeline breaking are high and the resulting outcome will (shadow) the countless other pipeline spill and breaks - in addition to desecrating sacred land. Tribal Chairman David Archambault II has said, "The demolition is devastating. These grounds are the resting places of our ancestors. The ancient cairns and stone prayer rings there cannot be replaced In one day, our sacred land has been turned into hollow ground". Along with desecrating indigenous land the pipeline will ruin access to safe and clean drinking water, annihilate natural ecosystems, and ravage the local farming and food sources.
Additional information about the rally and Indigenous Youth 4 Cultural Survival can be found on facebook. The facebook event link is
https://www.facebook.com/events/1829518453944764/

UNITY in Solidarity with Standing Rock 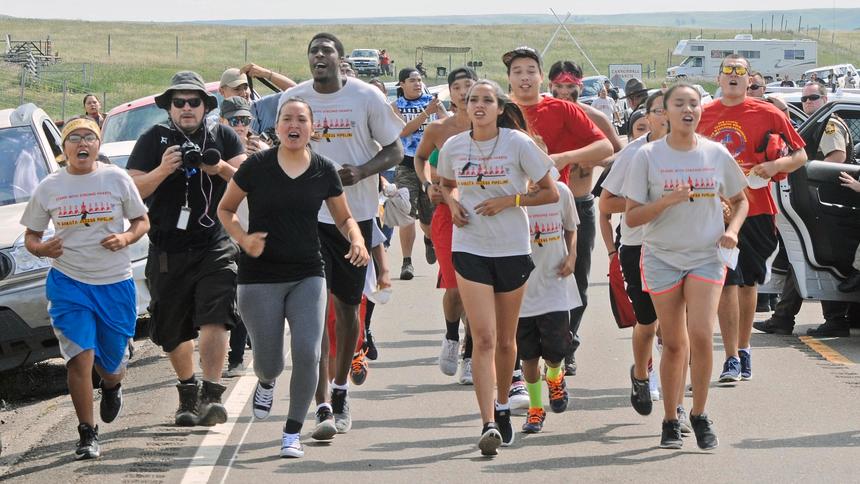 The future of ALL youth is in your hands and our words have now been carried to you.
Statement for Oceti Sakowin from Generation Indigenous youth across America     We, the undersigned youth from UNITY’s (United National Indian Tribal Youth) 2016 class of “25 Under 25” Leaders program support our Indigenous brothers and sisters, as well as all beings on earth. We stand in solidarity with the Standing Rock Sioux Tribe in their efforts to rise up and band together against the construction of the Dakota Access Pipeline through the land which the Missouri and Cannonball River flow and under the Mississippi. 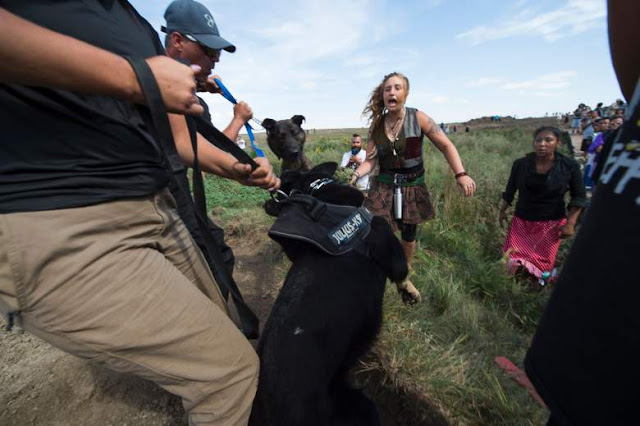 As Navajo youths from Shiprock, N.M., were in Standing Rock Camp on Saturday, Dakota Access Pipeline security attacked the people with vicious dogs

CANNONBALL, North Dakota -- The Shiprock Chapter appealed to President Obama to intervene, after attack dogs were sicced on Navajos and others defending a burial place from bulldozers near the Standing Rock Camp on Saturday.
The Shiprock Chapter passed a resolution and stated that Navajos were greatly disturbed that there was violence, and security personnel of Dakota Access Pipeline released attack dogs on unarmed resistors of the pipeline.
The resolution points out that rights to free speech in America are protected by the Constitution and the Declaration on the Rights of Indigenous Peoples requires "free, prior and informed consent," before development occurs in Indigenous territories.
Shiprock said that as an adopted member of the Crow Nation, it is incumbent on Obama to intervene and prevent injury to the people and carry through on his responsibility to the people.
Shiprock President Duane 'Chili' Yazzie said, "As Indigenous Peoples we have been under genocidal assault since 1492, our Earth Mother has been exploited to the point of endangering her life with climate change."
"At some point we must stand as one against the assault and that time could be now at Standing Rock."
"We stand with Standing Rock because their struggle is the frontline in the fight to defend the Earth and our water. The life of the Earth is our life."
"At all costs we must protect the Earth and the water, as our action is to secure a comfortable survival for our grandchildren into the future," Yazzie told Censored News.
Yazzie is a longtime human rights defender, who was a member of XIT band, the sound of the American Indian Movement in the 1970s.
Meanwhile, although Obama visited Standing Rock in 2014, Obama has not spoken out concerning the desecration of the sacred burial place by bulldozers on Saturday, and the attack by vicious dogs, which bit six of the Native Americans and supporters who were protecting the area. One child and a pregnant woman were among the six bitten and dozens were pepper sprayed. At least one person was assaulted by the pipeline's private security.
After the protectors were attacked, the Morton County Sheriff's office release a statement of false accusations accusing the protectors of violence. However, the photos and videos expose the Sheriff's office's lies.
In the Standing Rock Camp, Navajo youths from Shiprock, located in the Four Corners, brought supplies to the camp. Many Navajo youths have been working in the kitchen and in other areas of the camp.
In Shiprock, radioactive tailings remain strewn from the Cold War uranium mining and respiratory problems are common, because of the coal-fired power plants in the Four Corners region. The Gold King Mine spill poisoned their irrigation waters, and devastated farmers.

See below the resolution: 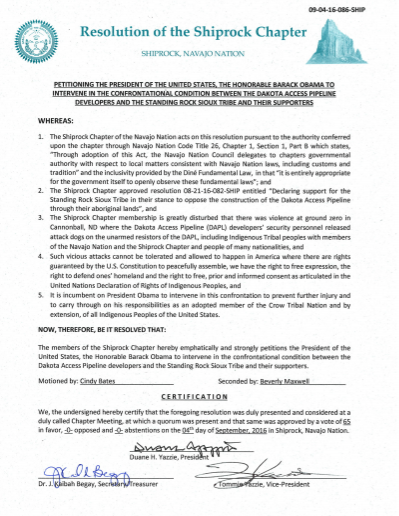 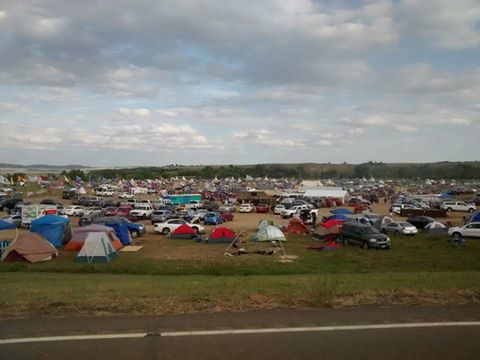 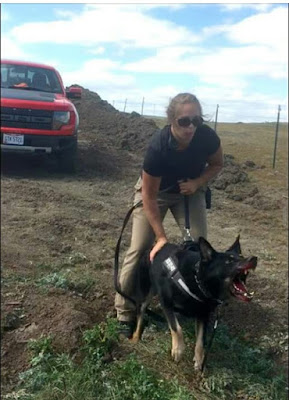 The blood on the teeth of this attack dog
is the blood of water protectors as they defended
a burial place on Saturday.

In response to Saturday’s peaceful protest that turned violent when security workers for DAPL unleashed pepper spray and vicious attack dogs on a crowd of water defenders. I demand answers from North Dakota’s governor and law enforcement. The State of North Dakota is quick to erect military barricades and try to portray us as savages when our water defenders merely park their cars along the side of road, but where were all the police when dozens of innocent and peaceful Tribal members, including many from my tribe, were intentionally shot with pepper spray and ravaged by vicious dogs at the hands of DAPL’s mercenaries?

On Saturday afternoon DAPL’s private security guards initiated force against a crowd of mostly tribal members who were protesting in a non-confrontational manner to stop the ongoing stripping of land, including areas of land where documented sacred sites have been discovered. DAPL used dogs and pepper spray to attack innocent, unarmed women and children, while helicopters were threatening overhead.  They will stop at nothing.  They do not know the meaning of humanity.
According to many witnesses at the scene, neither state nor county law enforcement officials were at the construction site during the incident. It is extremely suspicious to me that law enforcement became scarce at the exact time when DAPL’s hired guns were planning to attack the water defenders.  A press release recently issued by the Morton County Sheriff’s Department insinuates that the peaceful protesters were the provokers of the incident because several individuals allegedly cut a fence and entered the work site.  State and local law enforcement officials keep telling the media, without proof, that the protesters are committing unlawful acts.  In my opinion unleashing vicious attack dogs on women and children, and spraying dozens of unarmed people simply because they are exercising their constitutional right to assemble, is unlawful.
I am calling on all members of the Cheyenne River Sioux Tribe to avoid traveling to or doing business in the Mandan-Bismarck area until this crisis is resolved. I fear for my people’s safety.  Today’s act of terrorism shows us how desperate DAPL and the State of North Dakota government are to keep things at a status quo.  I am concerned about the escalating violence against Natives in that area.
When will Governor Dalrymple step up and meet with Tribal leadership in an open, good faith effort to resolve this conflict?  The key to settling this situation is in the hands of North Dakota leadership.  I requested a meeting with Governor Dalrymple last week, but as of today has received no response.

Please do not hesitate to contact me at 605-964-4155 or haroldcfrazier@yahoo.com if you should have any questions or concerns.


Released under the authority of 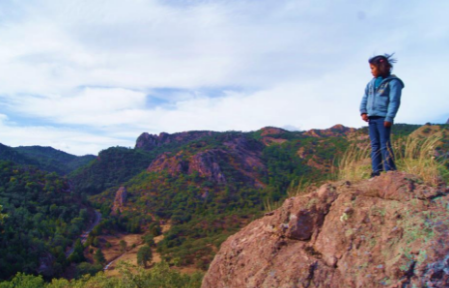 Indigenous peoples and protection of bio-cultural heritage of Sonora


Censored News
Press ConferenceTopic: Mining Companies and the future of the territories and Indigenous Peoples of Sonora: The case of Pima / O'ob village in the municipality of Yecora, Sonora.Location: Hotel Gandara, Hermosillo, Sonora, MéxicoDate: Thursday, September 8 at 10:00 am

With Father David Beaumont Joseph Pfeifer, OFM, Cap. Anthropologist Alejandro Aguilar Zeleny, and Representatives of the Indigenous People O'ob (Pima) the municipality of YécoraContent:Currently in the state of Sonora, according to official data, there are over 200 mining concessions, some of them in territories of indigenous peoples of the state. The mining currently poses risks to the ecology and the communities that surround these major projects, such as pollution in the river of Sonora. It represents a risk to the survival of Indigenous Peoples, deeply linked to its territory and natural resources on which they depend, not only them but also the rest of society. The risk of ecological damages and the long-term impact threaten not only the present generation but also those of the future.The O'ob (Pima) culture is an ancient culture, founder also of the Sonoran identity and still present, as modern society to this day, due to their logical resource utilization. Establishing mining companies in the region is the risk of affecting forests, damage to biodiversity, pollute rivers and streams and of course threatens the present and future of this society with a rich bio-cultural, archaeological, historical, anthropological heritage and spiritual.