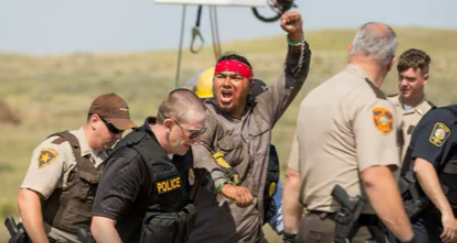 CANNON BALL, North Dakota -- Debra White Plume, Lakota grandmother, speaks on Standing Rock Spirit Resistance Radio, and shares her thoughts on the Red Warrior Camp and non-violent direct action.
Debra describes the purpose of the action of two Native men, locking themselves to an excavator to halt the construction of Dakota Access Pipeline.
"We're there to stop construction," Debra White Plume said. "Construction was stopped for the whole day.
Describing the spirit of those gathered, she said, "There was so much love there."
Some of the women started crying when they were cutting 'Happy' American Horse, Lakota, off the machinery. She said he began chanting to comfort them.
"It hurts us to see our brothers do that," Debra said.
Recalling Happy American Horse as they were cutting him away, Debra said, "I'm so inspired by him. I'll never forget what a warrior looks like."
Debra said their team was trained, but there are often those who come to direct actions who are filled with rage because of how they have been treated by police.
The training in non-violent direct action includes how to de-escalate the police, construction workers, and even our own people, she said.
Listen below to the interview, recorded live in camp by Govinda, Standing Rock Spirit Resistance Radio (18 min.)