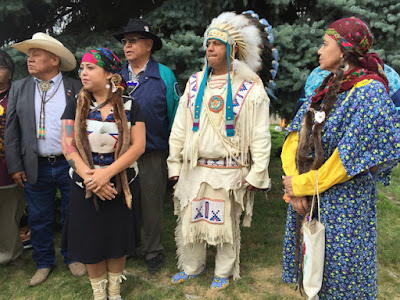 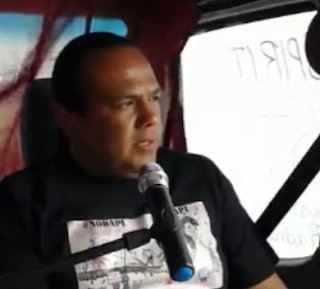 CANNON BALL, North Dakota -- Yakama Chairman JoDe Goudy speaks on Standing Rock Spirit Resistance Radio, sharing his thoughts on balance, prayer, spirit and integrity.Chairman Goudy said his people have always lived along the Columbia River. He describes how the Hanford Nuclear Site has damaged the land, water, fish, and chokecherries of his people."Our people were never consulted," he said of the nuclear site, adding that various plants like aluminum plants have affected their river.Speaking on the solidarity with the stand being made here at Standing Rock for the natural law of Mother Earth, he describes the industries poisoning their river.Now, a fossil fuel superhighway is proposed for the Northwest and huge coal exports to China pose more threats.There are oil train transports along the river from the Bakken in the Dakotas. There was an oil transport spill six months ago on the Oregon and Washington border.Chairman Goudy, speaking on surviving all of this, said, "We are a traditional people."He said they are blessed that the Creator communicated in a powerful way withinstructions and songs. Among those instructions is to remain grounded in prayer and spirit.He said his people deal with problems by consulting one another, and other tribes in the area. Many times the issues are dealt with in the judicial realm, and other times in the legislative and executive branches of the U.S.The Yakama Treaty requires that the Executive Branch of the United States government, which is currently President Obama, meet annually with the Yakama."Treaties are the highest law of the land."When asked about facing all these challenges, he said, "We are resilient people."Chairman Goudy said his people would continue to speak for those who cannot speak for themselves.Their struggle is to eat clean food, and drink clean water.Chairman Goudy speaks of the great lie, and that lie is to live and act without integrity.When asked about the United Nations, Chairman Goudy said he is concerned about some of those organizations at the U.N., especially if one follows "the purse strings" of those U.N. organizations.Chairman Goudy speaks on balance, and waging the individual battle within to act with integrity, regardless of what comes before us.When asked the message that he would like to leave with the people, he said, "Have a love for our people, have a love for all people," and reminded all to remain peaceful and prayerful.Listen to more of his interview.

Truly good for my heart to listen to Yakima Chief, a genuine credit to show his love, respect, and clear knowledge
Miigwech. I'm going to say a prayer in a traditional way to give to you that prayerfor what you have helped, are helping us people,

I thank Creator for listening to our prayers for all people. It is sad that money and destruction is the only ambition those people have, I will continue to pray for mother earth as well, she works hard so that we may live,she is enveloped in smog from gas and oil on land and sea.