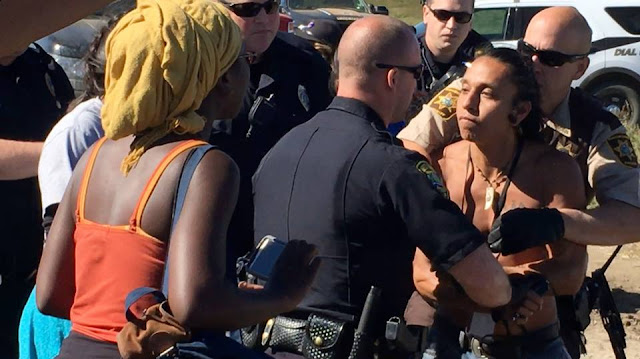 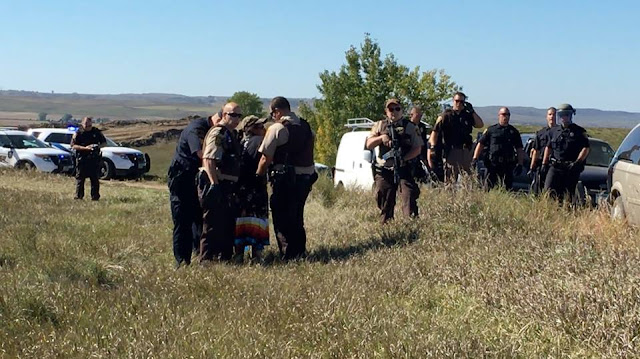 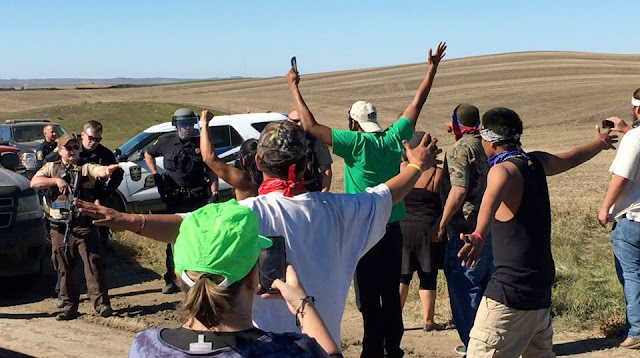 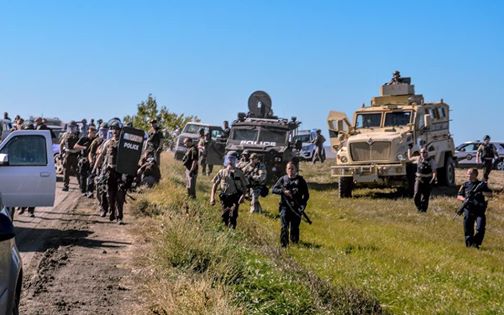 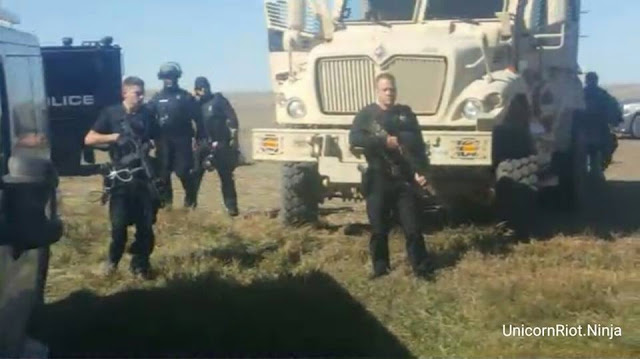 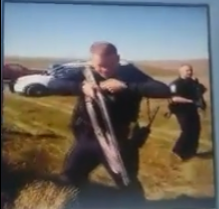 Officer loading 12 gauge riot shotgun -- while women, children at elderly are at the prayer -- at action site now: Wednesday, Sept. 29, 2016 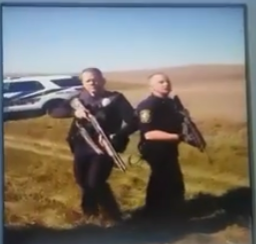 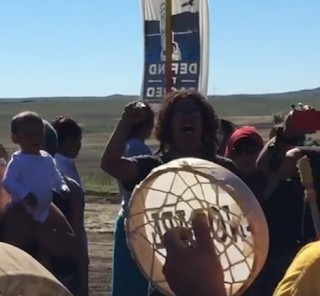 Live video: They dropped tear gas, we are surrounded by police.
"They are moving in."
"They won't let us leave. They have us locked in on both sides."
"They've got their weapons drawn."
"They've got snipers on top of the hill"
"They are blocking me on Facebook."
"They are arresting everyone now. Everyone is running."
"Share this far and wide."

The William Thomas Memorial Antinuclear Peace Vigil in DC, across from the White House, supports & believes in you. Keep the faith!!

#ONENATION
THEY HAVE AWOKEN A SLEEPING GIANT.

I am so so sorry for the aggressive and violent acts towards our people. We are not united here. And many white people cry when seeing this horrible behavior! I'm thinking most whites have no courage to stand up and fight! My grandfather I never meet Ralph Whitehorse Murray road a motorcycle in some traveling carnival! I am proud to be mixed with Native American people. I am not the typical white asshole! Stop destroying peace! Stop destroying the Earth!! Stop killing each other!! Wtf we are all crazy!! Just STOP

This makes me so very sad. I stand behind you completely. I do not think race needs to be held responsible for what happened. I am white and also share Cherokee blood line. What actually happened is due to Corruption, Greed, and Power. People with power and control always react this way when they feel challenged. It doesn't matter what color you are. If a group of white people or other nationality group gathered to protest an event the outcome would have been the same. I think what it is really about is Big Me Little You type of thing. People in positions of power and corruption will go to any means necessary to maintain their power base and control. When I say any means I mean that literally. Power, Money, Control, and Greed is the evil of all evils.

Not that I want to be mean but I hope every cop and officer that was involved with this contracts some nasty form of cancer from the poisoned water they will create.

Definitely the most well armed police state that corporate and banking money can buy.

My video that you guys had up disappeared from my page��

I have traveled over dozens of nations and my own country is the most greedy violent CRIMINALLY ignorant Godless hypocrite shallow predatory land of evil I have ever encountered. Every one of those thugs in uniform should be in prison for SERIOUS crimes against humanity. I served my country LONG LONG ago in it's most elite military branch. I train not your sons - but YOUR FATHERS! I am no longer proud of my uniform nor my blood stained flag of terror. NO American flag is big enough to hide the immense misery death destruction suffering rapes humiliation and outright MURDERS committed in its name. We are the NEW Sodom of evil lands on the Earth.

Fascist pigs!!!
May they be haunted and cursed to the
ends of the Earth for this outrage!!

I'm saving the material as screenshots
and will set it to video, to expose the Fascist pigs'
flagrant violations of the First and Fourth Amendments of the Constitution
and violations of human rights!!
In time, the Fascist goon-squad will pay dearly with their souls!!
Not only the whole world is watching,
but THE ENTIRE UNIVERSE IS WATCHING!!

Blessings to you and our indigenous and non-Native allies.
Never give up the fight.

SHAME! SHAME ON THE GOVERNMENT!

We need to put these criminals on trial and everyone involved in going against the Native Americans. Let we the people be the judges and jury this time. We'll put an end to this insanity once and for all.

I call for everyone in Washington, D.C. to leave because they're useless. This wouldn't be happening if they had the guts to stand up for the people instead of the oil barons.

#No DAPL #NO HATE Go to facebook, search oceti sakowin camp at the top of the page. Click on the name when it appears in your search and then "check in" 🙂

Tried to share link with several friends and sites and Facebook has filtered posting with a security code. I was able to post however. Other links other subjects, no problem. Facebook is censoring.....so what else is new???

#noDAPL #nobakken #NOMORESELLOUT
CONGRESS IS GETTING READY TO SELL US OUT AGAIN!

STOP VICTIMIZING SACRED STONE CAMP AND WE THE PEOPLE!

Please sign and let your Reps and Senators know WE THE PEOPLE WONT TAKE IT ANYMORE!

-----------------
THE CIVIL RIGHTS OF THE SACRED STONE CAMP DEMONSTRATORS ARE BEING VIOLATED BY POLICE! NO ONE IS DOING ANYTHING TO STOP IT!!

Good news info for me