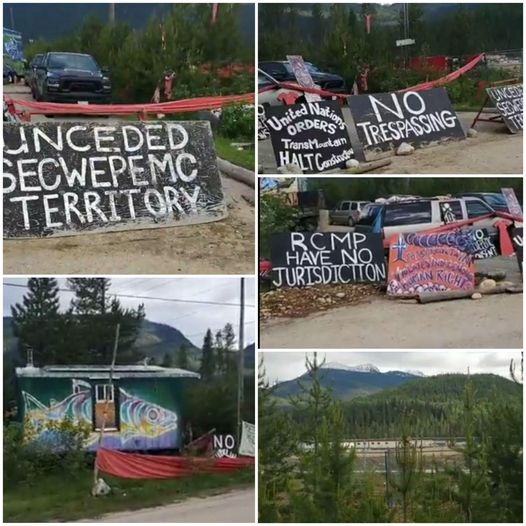 Govinda is in Blue River, setting up a mobile and FM grassroots radio station on Secwepemc ancestral land. The beautiful land is being destroyed by the Trans Mountain pipeline, north of Kamloops, BC, and a man camp of trailer houses is just outside the doors of the Tiny House Warriors, where the resistance continues. Watch Govinda's video just shared.

Read more -- Type Investigations reports:
“Like my grandpa George says, our culture flows from the land, our language flows from the land,” said Kanahus Manuel, who together with her twin sister Mayuk founded the Tiny House Warriors village in 2017. “When we resist and stand up and fight back, we’re saving ourselves from extinction.”
As much as the Tiny House Warriors village has been a hub for maintaining Indigenous culture, it has also been a hub of resistance. The homes sit on a road alongside a construction site related to a massive expansion of the federally owned Trans Mountain Pipeline, a 1,150-km (710-mile) pipeline that carries 300,000 barrels of tar sands diluted bitumen every day from Alberta through British Columbia to an endpoint on the Canadian coast outside Vancouver.
https://www.typeinvestigations.org/investigation/2022/05/15/trans-mountain-pipeline-indigenous-land-rights/
at June 11, 2022 No comments: