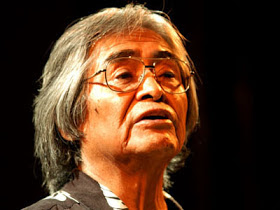 Acoma Pueblo professor, poet and author Simon Ortiz responds to Trump's irrational plan to inject himself into the Black Hills and glorify himself with fireworks during a pandemic. Ortiz magnifies the words of Lakota Dakota author Ruth Hopkins in her article, 'Trump's trip to Mount Rushmore puts lives and a fragile ecosystem at risk.'

Ruth Hopkins writes, "In his typical fashion, characteristically an irrational, pernicious level of arrogance commingled with obliviousness and indifference, Trump fails to grasp or care that Mount Rushmore is in the middle of the Black Hills National Forest."

That's fact and opinion and all of it is the truth. And it is also fact and opinion of a very specific sort and intention as emphasized by Trump's egotism mightily -- and a re-statement of national belief when it comes to Indigenous peoples of the USA and the Americas as a whole.

Mount Rushmore is a statuesque statement of imperialism, power, and egomaniacal and fanatical pride ultimately. And falsely spoken by Trump too who's likely unaware he's doing it, cheering for himself! And in this case, intended to self-celebrate Trump's presidency brazenly.

So citizens who buy that can vote for him in November.

World-renowned writer Simon Ortiz served as Regents’ Professor of English and American Indian Studies at Arizona State University. At Censored News, we celebrate Ortiz for his words of poetry and books, and for standing up, and speaking out for the Zapatistas, carrying crosses bearing the names of the Zapatistas who were massacred in Acteal, Chiapas, during a march in Tucson.

A leading figure in the Native American literary renaissance that emerged in the 1960s, Simon J. Ortiz has published many books of poetry, short fiction, and non-fiction. In general, his writing is concerned with modern man’s alienation from others, from himself, and from his environment—urging humanity to reconnect the wisdom of ancestral spirits and with Mother Earth. His poetry collections include Going for the Rain (1976), A Good Journey (1977), From Sand Creek (1982), Woven Stone (1992), After and Before the Lightning (1994), and Out There Somewhere (2002).

Ortiz, who is an Acoma Pueblo Indian, was born and raised near Albuquerque, New Mexico, and grew up speaking the Acoma tongue. “This early language from birth to six years of age in the Acoma family and community,” he has written, “was the basis and source for all I would do later;” ironically, he was punished for speaking it at school. Nicknamed “the reporter” by his father for the absorbed attention he paid as a child to tribal elders’ stories, he has continued to base his creative work on his people’s powerful oral tradition.

After attending Fort Lewis College and the University of New Mexico, and attended the International Writing Program at the University of Iowa for one year. During the 1960s he also served in the Army, where he suffered discrimination, and worked in a uranium mining industry whose profit-driven desecration of the land he would later movingly protest. In the early 1970s he began to write in earnest while teaching at various colleges, and in 1982 won a Pushcart Prize and a wide audience with From Sand Creek. Perhaps his most important book is 1992’s Woven Stone—a blend of the poetry and prose of three earlier volumes that is a spiritual autobiography. -- Simon Ortiz Foundation
at July 02, 2020 No comments: 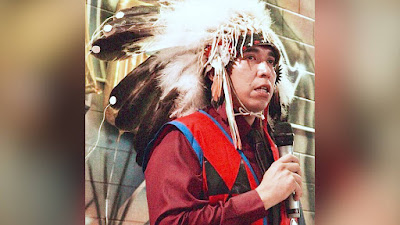 Democracy Now!
In South Dakota, the president of the Oglala Sioux Tribe has ordered President Trump to cancel a planned visit to Mount Rushmore on July 3 for his Independence Day celebration. Julian Bear Runner told The Guardian, “The lands on which that mountain is carved and the lands he’s about to visit belong to the Great Sioux nation under a treaty signed in 1851 and the Fort Laramie Treaty of 1868 and I have to tell him he doesn’t have permission from its original sovereign owners to enter the territory at this time.”

Read the article in The Guardian: Donald Trump should stay away from Mount Rushmore