Rep. Omar and Squad at Stop Line 3 Protest in Minnesota

Rep Omar and the Squad urge Biden to stop Enbridge Line 3
U.S. Ilhan Rep Omar and the Squad urged President Biden to stop Enbridge Line 3 pipeline. The damage of the construction will be followed by dirty crude oil from Canada endangering the rivers, water supply and wild rice.
“They want to prioritize corporate profits over the lives of indigenous women and the future of our planet,” said U.S. Rep. Ilhan Omar, reports CBS Minnesota.
Read more »
at September 04, 2021 No comments:

Zapatistas 'Against Xenophobia and Racism, The Fight for Life' 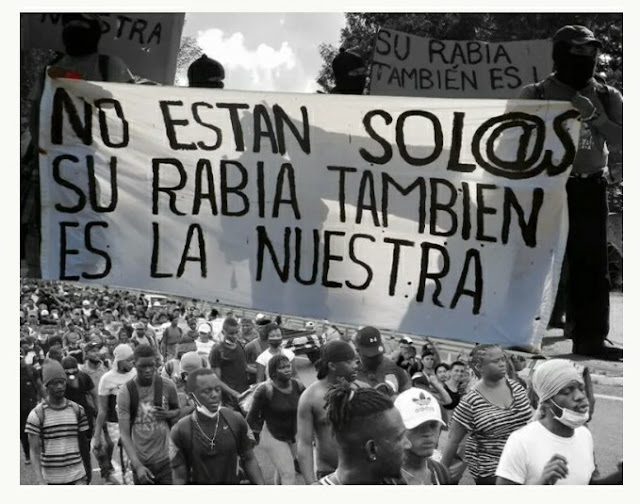 Against Xenophobia And Racism, The Fight For Life

To whom it May concern:

In agreement with the Zapatista Good Government Juntas, the CCRI-CG of the EZLN, and the Zapatista indigenous communities, we declare the following:

First.- In recent days we have witnessed the inhumane treatment that the Mexican State gives to migrants who try to get out of the trap, mute and invisible, in which they find themselves in the city of Tapachula, Chiapas, Mexico.

Second.- As in previous governments to the current one, to the complaints and citizen claims for these cruelties, the Mexican government promises sanctions for the "excesses" committed by agents of the National Institute of Migration (INM). That promise is just one more lie. The agents are told that this will be said publicly, to avoid the pressure of so-called public opinion, but that they must continue with their methods of human hunting without fear of consequences. No migrant should go beyond Chiapas.

Third.- Even among the elements of the so-called National Guard there is discontent. Because they were told that their mission was going to be to fight organized crime, and now they have them as hunting dogs chasing dark-skinned people. Because that's the instruction: to hunt down any person with dark skin: "Stop any black you bump into," is the order. It is quite a statement of foreign policy.

Fourth.- The indoctrination of the agents of the National Institute of Migration borders on the ridiculous. They tell them that they are defending Mexico from an invasion - as one INM official stated with self-confidence. It would not hurt the National Migration Institute to take some basic history classes - now that there is a return to school - to understand that those who invade are from the United States government that imposes this immigration policy that contradicts the entire history of foreign policy of the country. Mexican State.

Fifth.- The maneuvers carried out by the INM to encapsulate human rights organizations and the press, so that they do not document their actions, remind us of what the Salinas de Gortari government did in the first days of 1994, when it closed the access to the Lacandon jungle to prevent people from knowing what he was doing. And the human hunting of migrants reminds us of the Zedillo government that, in 1995, ordered us to be chased with dogs.

Sixth.- It is quite a shame that a government, which calls itself progressive, bends to the foreign policy of the North American government, as to add the imitation that it does of what the Chiapas farmers, still just a few years ago, did to subdue their pawns. According to the religious references, so expensive up there, it is preached: "that your left foot does not know who you are kicking with the right foot."

Seventh.- We call on every honest and sensitive person to demand that this situation stop now. And that, to the extent of everyone's possibilities, humanitarian aid is provided to migrants.

For our part, the indigenous Zapatista communities, through their 12 Good Government Boards and the Sixth Zapatista Commission, have collected a modest amount of pay, which will be sent to some of the shelters or organizations that do humanitarian work with migrants in Chiapas.

We call on the Sixth National, the Networks in Resistance and Rebellion, the collective "The Time of the Peoples Has Arrived", Non-Governmental Organizations and people of good will throughout the world to do what is in their power to , first, to stop the hunt carried out by the INM with the support of the National Guard, and, second, to improve the living conditions of the migrant population present in this geography called Mexico.

Just like these migrant brothers and us extemporaneous, one day we will all be migrants and extemporaneous on this planet. And everyone who does not have the color of money, will be persecuted, hunted, confined, disappeared, eliminated.

Therefore, against xenophobia and racism, the fight for life.

From the mountains of the mexican southeast.

Collage based on an image of a migrant caravan, mostly made up of Haitians, that travels a highway in the municipality of Tapachula, Chiapas state, Mexico, on September 1, 2021. © EFE / Juan Manuel Blanco