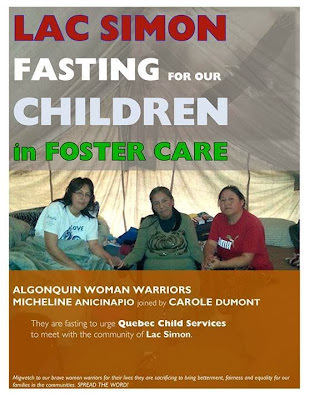 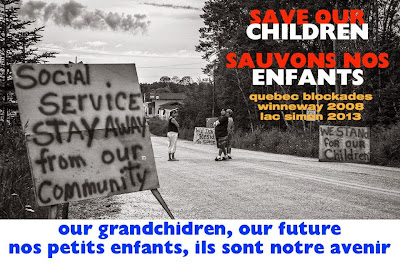 ROADBLOCK to stop Quebec Social Services from wrongly seizing any more Native children from the Algonquin community of Lac Simon. The fast continues until Social Services meets to discuss their policies of removing children from families. Parents say policies are unnecessary and destructive. Support page: http://lakota.cc/17q3xw6 News article (in French): http://lakota.cc/1c2S1Xq
at November 22, 2013 No comments: 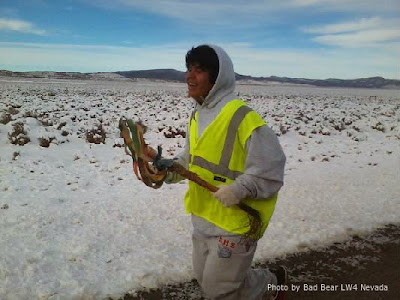 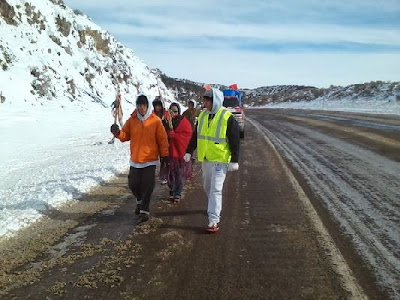 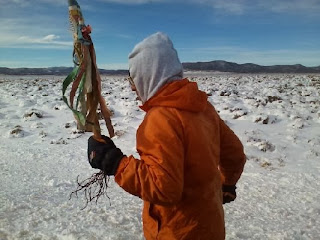 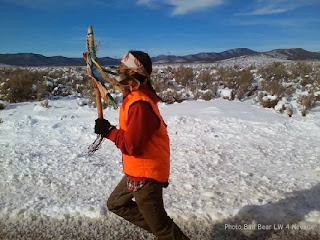 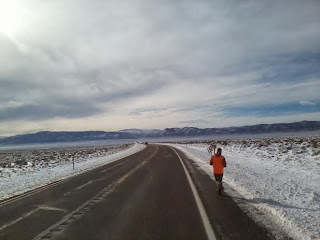 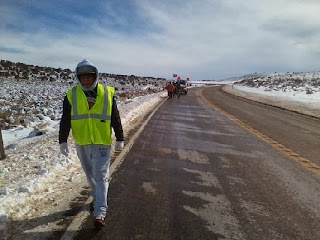 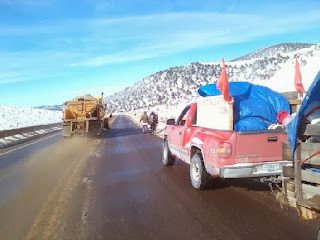 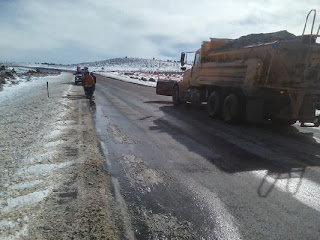 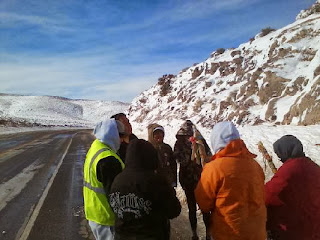 The Longest Walk 4 Return to Alcatraz continues carrying the staffs today west to Alcatraz. Walkers headed out this morning after a snowfall on Thursday. They are walking west of Ely Shoshone, Nevada. Photos by Western Shoshone long walker Carl 'Bad Bear' Sampson, thank you for sharing with Censored News!
www.returntoalcatraz.com 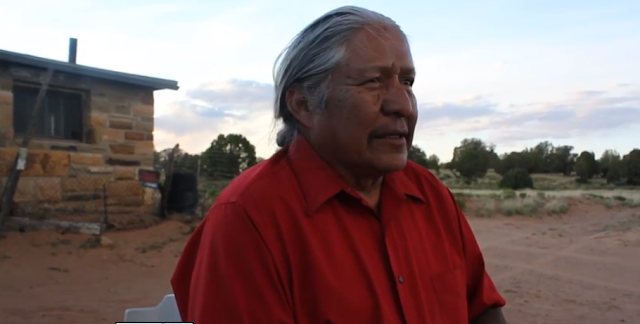 Read more about this film work in progress, and the work of Bahe Katenay of Big Mountain and the filmmakers at: http://blackmesafilm.com/

By Brenda Norrell
Censored News
This is what education should become in the future, sharing the voices of Dine' grassroots people who know the real story of Black Mesa, and the real history of Peabody Coal, corrupt politicians, the dirty coal industry, and how it resulted in Navajo relocation.
This is also what the media should become, uncensored and reporting the voices of truth.
Bahe Katenay was one of those censored by Indian Country Today, before I was terminated as a staff reporter. In that interview, Bahe spoke about the oil and gas drilling in Dinetah, the sacred place of origin, and the role of the "puppet" Navajo Nation Council, which signs energy leases, is coopted by the US government and threatens future generations of Navajos with water rights loss, pollution from dirty coal power plants, and destruction of the earth.
In the interview censored by Indian Country Today concerning those oil and gas leases, Bahe Katenay said, "I am also saddened when I think that, because these lands were given away for profit, the rest of our sacred lands everywhere are being desecrated, today: Mount Taylor, San Francisco Mountains, and Big Mountain.”
Read more:
http://bsnorrell.tripod.com/id104.html
at November 22, 2013 No comments:

Ford to Harper at the barbecue: “Aw, shucks! You want me to be Ontario Premier?”
CEO Prime Minister Harper puts the criminals in charge and above the law. The bankers tell the CEO who to appoint to the Senate. They are the Board of Directors who draft and lobby by-laws. The Prime Ministers Office PMO controls the RCMP and courts. The main stream media is the Ministry of Propaganda that puts blindfolds over everybody’s eyes.
The RCMP released 89 pages of incriminating emails that point directly at Harper as being part of the PMO cover up of their wrong doing with Senator Mike Duffy.
Senators Duffy, Pamela Wallin and Patrick Brazeau were set up for the slaughter and are expendable by design. When the PMO is in charge of the Supreme Court, senators and RCMP, they are unlikely to be charged with wrong doing.

The constitution was never ratified by the people. Corporations invent rules to keep the political thugs in charge. The ‘economic hit man’ bribes them. “Don’t worry about the people. Think about you and your family”. They stay silent otherwise they might not get their pension.
The current bizarre Rob Ford-Toronto City Hall escapades and Harper-Senate scandal are distractions to keep us from seeing the theft of the $3.1 billion anti-terrorist funds created after 911. The Auditor General cannot account for it. No one is talking about it in Parliament. Rob Ford runs into Toronto city council and pushes people over. The thieves play out the political crime show on “Question Period” in Parliament. These shenanigans are all theatre!

RCMP: “Mr. Harper and Mr. Ford, you’re doing a good job beguiling the public!”
It appears Rob Ford and Stephen Harper cannot be removed if they chose not to be. The corporate by-laws protect CEOs of municipal, provincial and federal corporate bodies.  They are the “untouchables” and un-removable until the next pretend election. Remember, all leaders are selected, not elected under the pretend democracy. In the Montreal Corruption Inquiry, after public exposure, dozens of blatantly crooked politicians and their cohorts took the money and left. Only one mayor appears to be facing criminal charges. Listen to Louis Armstrong sing about how these powers try to keep us afraid: “Oh, the shark has pretty teeth, dear/And he shows ‘em, pearly white/Just a jack knife has Macheath, dear/And he keeps it, keeps it way out of sight.” “Mack the Knife”. Louis Armstrong.
MNN Mohawk Nation News kahentinetha2@yahoo.com  For more news, books, workshops, to donate and sign up for MNN newsletters, go towww.mohawknationnews.com  More stories at MNN Archives.  Address:  Box 991, Kahnawake [Quebec, Canada] J0L