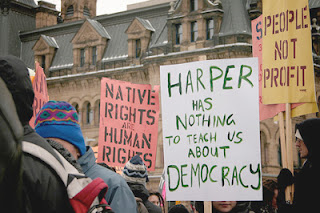 Bill S-7, also known as the ‘Combating Terrorism Act’, would allow persons to be detained for up to three days without charge (“preventive arrest”); strip individuals of their basic rights as accused under criminal proceedings to know and challenge evidence against them; threaten them with criminal punishment; and compel individuals to testify in secret before a judge in an “investigative hearing". Further, the judge may impose imprisonment of up to 12 months if the person does not enter into recognizance.
(enter into recognizance = imposed conditions to secure release, ie: avoid all contact with those engaged in, or participating in, pipeline protests) This note is not part of this news release: TD
Individuals subject to these provisions do not necessarily have to be suspected of committing any crime. It is enough that they are alleged to have information relating to a terrorism offence, or that they are alleged to be associated with another individual suspected of committing (or about to commit) a terrorism offence, or that they are otherwise suspected of potential future involvement with a terrorism offence. Furthermore, the scope of Bill S-7 extends beyond Canada’s borders, and could potentially result in a reliance on foreign intelligence. Without the ability to challenge evidence, there is no guarantee that the evidence is accurate, or was not obtained from a third country or source that conducts or condones torture as a method to elicit information. [It should be noted that the Canadian government has already given the green light to law enforcement agencies to accept information that may have been derived through torture, in violation of international agreements and standards].
In all such cases, individuals may find themselves caught up in these detention and interrogation provisions without any effective legal recourse.
Under these provisions, individuals could be forced to testify in a court of law, arrested, detained or made subject to bail conditions – all without charges being laid. Individuals have no right to know, and no opportunity to challenge, the basis on which they are being subjected to preventive arrest or required to attend investigate hearings.
While the proposed investigative hearings give the appearance of respecting due process, such as requiring judicial authorization, use and derivative use immunity, and the right to counsel, they still do not comply with the spirit of due process and the right against self-incrimination.
Investigative hearings not only introduce the notion of inquisitorial justice, they also transform the role of the judge who then becomes an actor at the service of police investigations. In addition, investigative hearings run counter to the essential principle of the separation of powers in a democracy and undermine the independence of the judiciary. Moreover, there are no safeguards to prevent a third country from relying on that testimony to unlawfully detain or lay charges against that individual, their family members or acquaintances while abroad.
The stigmatizing effect of being labeled a terrorism suspect, or an individual associated with terrorist activities, must also be considered. The stigma attached to an accusation of terrorism is severe, and comparable only to being branded a rapist or child molester. Yet the provisions proposed in this bill would effectively tar an individual as a terrorist, even though law enforcement officials may not have any grounds to lay charges or any evidence to secure a criminal conviction. The potential harm to individual reputations not to mention their livelihoods and continued employment cannot be discounted nor trivialized.
The Criminal Code, prior to the adoption of the Anti-Terrorism Act in 2001, was already an effective tool to counter terrorism. It allowed for lawful surveillance, evidence-gathering, prosecution, conviction and punishment while also upholding an individual’s Charter rights to the presumption of innocence, due process and a fair and transparent trial. These so-called anti-terrorism provisions do not maintain these basic legal standards.
The reintroduction of these sun-setted provisions adds no value to our law or to law investigation and enforcement. Indeed, they may actually impede effective counter-terrorism measures by tipping off potential perpetrators that they are under investigation. This was reaffirmed by the Air India Inquiry Report, released in 2010, which stated that electronic surveillance is an important evidence-gathering tool in anti-terror investigations.
It cannot be emphasized enough that the effectiveness and necessity of these provisions have simply not been demonstrated. The preventive arrest and investigative hearing laws, in effect from 2001 to 2007, were never once used for their intended purpose, and every major criminal terrorism-related incident in Canada since 2001 has been disrupted and prevented without the need for preventive detention or investigative hearings.
Renewing these provisions would normalize exceptional powers inconsistent with established democratic principles and threaten hard-won civil liberties. Commitment to the rule of law means that counter-terrorism measures must adhere to the values embodied in the Charter of Rights and Freedoms, and cannot infringe on basic rights.
The British Columbia Civil Liberties Association (BCCLA), the Canadian Council on American-Islamic Relations (CAIR-CAN), the Canadian Civil Liberties Association (CCLA), the International Civil Liberties Monitoring Group (ICLMG), the Canadian Association of University Teachers (CAUT) and La Ligue des droits et libertés are united in their opposition to the reintroduction of controversial security provisions into the Criminal Code of Canada. All are in agreement that the current powers of law enforcement already allow security agencies to pursue, investigate, disrupt, and successfully prosecute terrorism-related crimes.
We urge Canadians to reject these unnecessary encroachments on fundamental liberties and to call upon their elected representatives to do the same when this bill comes to a vote.
Endorsed by:
British Columbia Civil Liberties Association (BCCLA)
Canadian Association of University Teachers (CAUT)
Canadian Civil Liberties Association (CCLA)
Canadian Council on American-Islamic Relations (CAIR-CAN)
International Civil Liberties Monitoring Group (ICLMG)